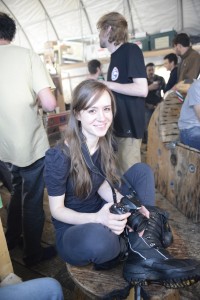 Beth Healey, a 28-year-old medical doctor from London, spent 14-months at the Concordia Station ending in January 2016 as a European Space Station researcher. She recently began posting reflections about the experience. Here are a few excerpts from her blog and a link to Part 1: Chronicles from Concordia.

Stepping out of the plane was like stepping out on another planet…There is a reason Concordia is often referred to as “White Mars”. There are no penguins or seals there, no native animals, let alone native people. The bright light of the 24-hour Sun reflected off the snow is blinding. My labored breathing was not out of physical exertion, but caused by the high altitude – as if we had been up on a summit of the Alps. Except for our group, the place was completely still and ghostly silent.

I am 28 years old and like what many girls my age do – shopping and getting a good haircut, and I don’t mind a nice spa treatment once in a while. These features are generally not considered well suited to life in a polar environment. However, I do not see why that has to be the case (although admittedly shopping may have to wait, spas will be run on a very individual basis and a decent hairdresser may be the last of your preoccupations at -80C). It is true, I am not built for minus 80 degrees cold, but then, who is really? So why should not I, Beth Healey, go polar for real?