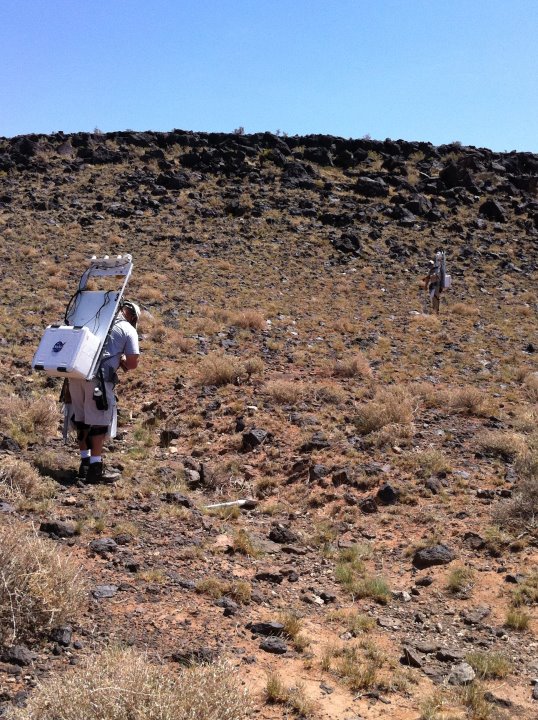 I’m responsible for putting together the team of scientists that will be working with the crew in the field when they are doing science activities at Black Point.  I was originally trained as a geologist, but after more than 20 years in the space program, I’ve developed a specialty in defining and executing field science operations – the actual activities a scientist would do outside of a laboratory to understand and explore a particular location.  I’ve been fortunate to work at the South Pole, several hundred miles from the North Pole, on volcanoes, in the Grand Canyon, and in everything from a helicopter to a space suit.

After graduating from Governor Livingston High School in New Jersey in 1970, I went to St. Lawrence University in Canton, New York in 1974.  I received a Masters Degree from the University of New Mexico in Albuquerque in 1976 and after a stint in the U.S. Army, I attended Arizona State University in Tempe, Arizona, where I received a Ph.D. in 1984.  I have been working in the Space Program since 1990, when I moved to Houston as an employee of Science Applications International Corporation.  My Desert RATS history goes back to 1997, when Mr. Joe Kosmo and I were part of the first Desert RATS team that went to Death Valley to do ergonomic studies of what geologists do in the field.  On that first venture, and almost 10 years of subsequent RATS trips, I was the test subject while Dr. Sudhakar Rajulu, a biomechanics expert, did motion studies of my activities as a did a variety of geologic investigations.  In 1998, I “graduated” to doing space suited activities, and for the next 8 years, I was the principal space suit test subject on our almost yearly excursions to Arizona and California.  In 2007, I moved up to the science management area, and in 2009, I was hired by NASA, in part to build on my experience on the previous Desert RATS exercises to expand the science support part of the test.

Last year, we tested a 14-day lunar exploration mission, with a full science team supporting the operation…now, what that means in simple terms is that when an astronaut is out on a planet’s surface, doing scientific exploration, there is a wide variety of people supporting them.  Some of these folks are from Johnson Space Center’s Mission Operations Directorate and they are concerned with things like the astronaut’s health and safety, the timeline of the day’s operation, and what to do in an emergency.  Our science team last year was responsible for paying attention to the scientific part of the mission – what do we want to accomplish scientifically, how is the crew doing it, do they need any scientific expertise to supplement their considerable talents, and are we seeing significant discoveries that we need to pay close attention to?  To accomplish that, we had approximately 10 scientists sitting in the science mission control 8-12 hours a day, in effect watching over the shoulders of the crew and helping them do their job in the field.

An important part of what we’re doing is testing – trying out new ideas for things no one has done before, seeing what works, discarding what doesn’t and improving what did.  Although NASA has been working on space exploration for 50 years now, there’s still a lot we don’t know how to do, and that we have to learn.  The most important part of this business is ideas – thinking of new ones, and testing them so we know what works, and equally important, what doesn’t.

That’s all I have for today…I’ll be posting more details in the next couple of days about what we’re doing, and what we’re learning. 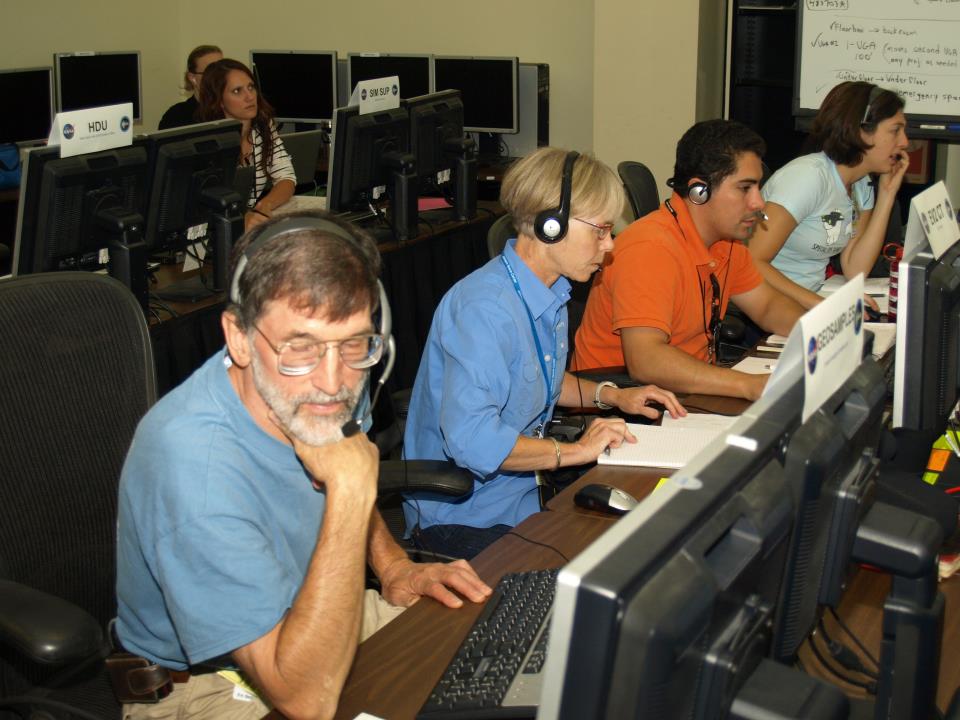 Sarah is a NASA geologist, and she is supporting the science backroom from the Netherlands in cooperation with the European Space Agency (ESA)

During the Apollo program, the astronauts had to learn a lot of geology in order to work on the lunar surface. The scientists who trained the astronauts wanted to remain involved in the mission and so they formed the first “science backroom,” a special room downstairs in the mission control building where they could monitor the astronauts on the lunar surface and communicate with them through Mission Control if they saw something they wanted to bring to the crew’s attention.

The Apollo science backrooms contained little more than a single black and white TV and a telephone to call Mission Control. Now scientists are used to interacting with data in real time and using that data to plan the next day’s science activities, like the Mars rover science teams. The Desert-RATS science team takes the best “lessons learned” from Apollo and robotic spacecraft operations and combines them.

Our Desert RATS science backroom is also in a room downstairs in Mission Control (we are across the hall from the ISS control room!), but unlike the Apollo backroom, we are operating with access to realtime data and video and interacting directly with the crew in the field.  For part of this campaign we also have a 2nd backroom set up in the Netherlands partnering with the European Space Agency at the European Space Research and Technology Centre.

The kinds of data that we have access to in the backroom includes live audio feeds from the crew (delayed 50 seconds because they are on an asteroid), video feeds (also delayed) from each crew member’s backpack as well as several video cameras including a “gigapan” camera on the rover, and more cameras inside and outside the “deep space habitat” or DSH.  We have GPS positioning of the rovers and the crew that are displayed in Google Earth.  We have geologic maps that were created for the mission from orbital imaging, like they would be in a real mission.  And we have all our individual geologic training to rely on.  All of these different types of data allows the backroom to follow along with the EVA as though we were in the field.  It’s as though each crew member has 9 trained geologists in their pocket as they go about their EVA.

In the science backroom, each team member has a specific role and job to do.  Some are following a specific crewmember as they make geologic observations and collect samples.  One is in charge of cataloging and prioritizing all the samples collected.  One is in charge of imaging, keeping track of all the cameras and even operating them when the crew is in the field.  We have a “Scicom”, the science equivalent of a “Capcom” that talks directly to the crew, and a science lead that keeps us all organized and coordinates with the flight director.

A typical day is about 12 hours long and is hectic and intense because we are keeping track of everything on the ground and observing what the crew is doing on the asteroid, and then on top of that, we are trying to make geologic sense of it all.

Despite the long hours, we find it very rewarding to use our skills as scientists to enable meaningful science in the course of human exploration.

Image from the science backroom from the European Space Agency in the Netherlands.