Engineers working in the Test Control Center monitored all core stage systems during the test as propellant flowed from six barges into the core stage in the B-2 Test Stand at NASA’s Stennis Space Center near Bay St. Louis, Mississippi. First looks at the data indicate the stage performed well during the propellant loading and replenish process. Part of the test was to simulate the countdown with the tanks loaded, leading up to 33 seconds prior to the engines firing. However, the test ended a few minutes short of the planned countdown duration.

The core stage and the B-2 test stand are in excellent condition, and it does not appear to be an issue with the hardware. The team is evaluating data to pinpoint the exact cause of the early shutdown. Then they will decide if they are ready to move forward with the final test, a hot fire when all four engines will be fired simultaneously.

For more updates, visit this blog or the Green Run web site: https://www.nasa.gov/artemisprogram/greenrun 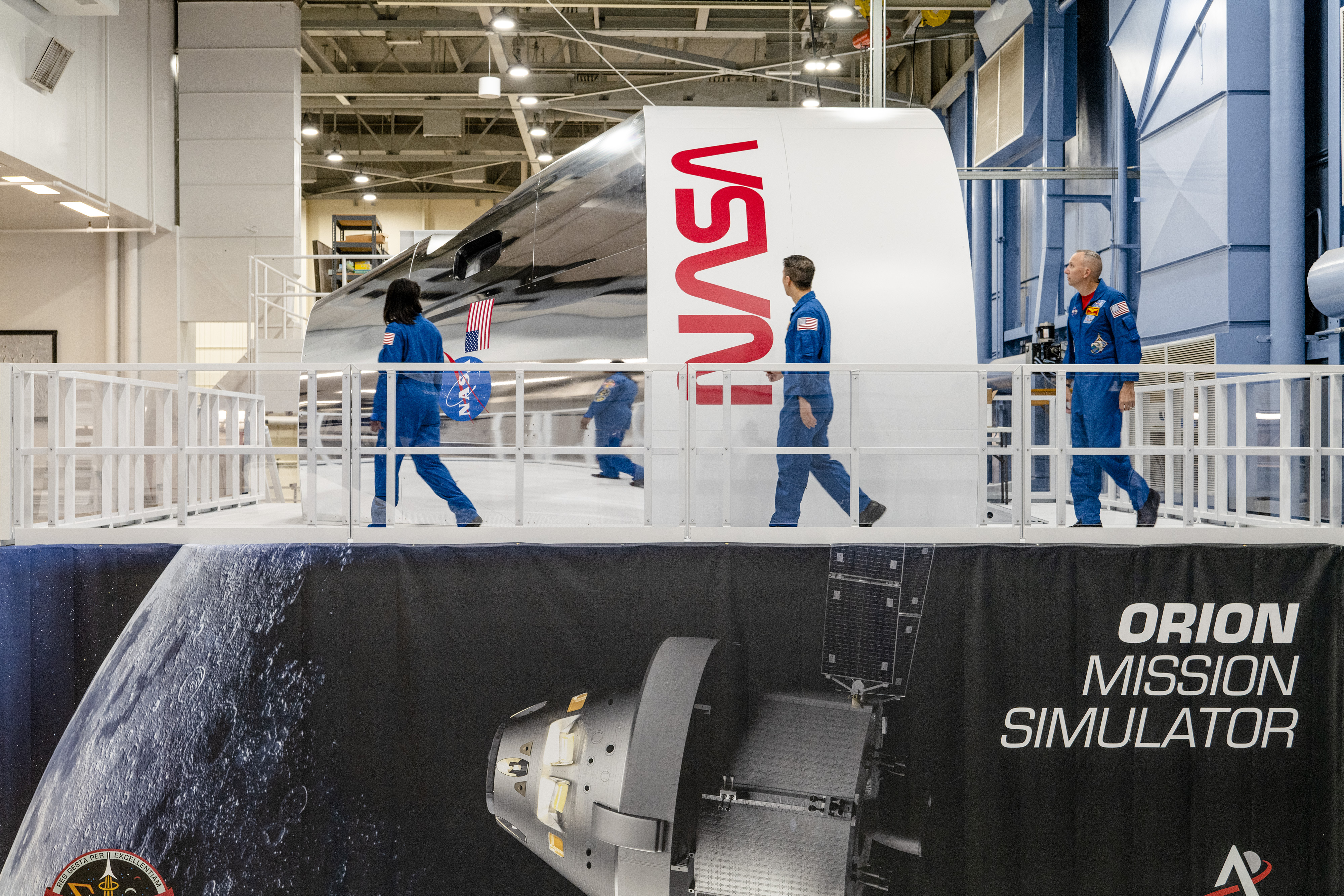 NASA Astronauts Stephanie Wilson, Jonny Kim, and Randy Bresnik take a look at the Orion spacecraft simulator that recently arrived at the agency’s Johnson Space Center in Houston. The simulator provides the ability for astronauts, engineers, and flight controllers to train and practice for scenarios during Artemis missions to the Moon. The interior of the simulator is being outfitted with Orion’s display and control system and crew seats to mimic what astronaut will experience during liftoff to the lunar vicinity and on their way back home to Earth.

Kim and Wilson are among the 18 astronauts recently named to the Artemis Team of astronauts eligible to be selected for Artemis missions to the Moon. Bresnik is currently the assistant to the chief of the astronaut office for exploration. NASA is targeting 2023 for Artemis II, the first mission with crew, with the Orion Spacecraft set to launch atop the agency’s Space Launch System rocket. The mission will send astronauts around the Moon and return them back to Earth, a flight that will set the stage for the first woman and next man to step foot on the Moon in 2024.

During final assembly of the Orion spacecraft at Kennedy Space Center in Florida, engineers identified an issue with a redundant channel on one of the spacecraft’s Power and Data Unit (PDU) communication cards. Orion has a total of eight PDUs, each of which has two cards with two redundant channels on each card that help provide communication between Orion’s flight computers to its components.

As a spacecraft designed to carry humans to deep space, Orion is built with significantly more redundancy to protect against failures than a robotic spacecraft. The PDU is still fully functional and will use its primary channel during the Artemis I mission, which is a non-crewed test flight.

During their troubleshooting, engineers evaluated the option to “use as is” with the high-degree of available redundancy or remove and replace the box. They determined that due to the limited accessibility to this particular box, the degree of intrusiveness to the overall spacecraft systems, and other factors, the risk of collateral damage outweighed the risk associated with the loss of one leg of redundancy in a highly redundant system.  Therefore, NASA has made the decision to proceed with vehicle processing.

NASA will proceed with spacecraft processing, and engineers are currently completing final closeout activities and will transfer the spacecraft in mid-January from the Neil Armstrong Operations and Checkout Facility to the Multi-Payload Processing Facility for fueling and preparation for integration with the Space Launch System rocket. The new timeline does not impact the launch schedule, and NASA remains on track for a launch in November 2021.

Check back at this blog for more updates as Orion prepares for its transition from assembly to launch operations.

NASA and the United Nations Office for Outer Space Affairs (UNOOSA) have signed a memorandum of understanding (MOU) pledging cooperation in areas of science and technology to support the peaceful use of outer space.

Through this cooperation, UNOOSA and NASA will develop ways to leverage NASA’s Artemis program as part of UNOOSA’s Access to Space for All Initiative, which offers opportunities for international researchers and institutions to take part in this unprecedented journey of discovery.

NASA and Boeing engineers have powered up the Space Launch System rocket core stage to continue with the seventh test, wet dress rehearsal at the agency’s Stennis Space Center near Bay St. Louis, Mississippi. The NASA and Boeing team plan to fully load the stage’s liquid hydrogen and liquid oxygen tanks this week. This test demonstrates the ability to load the core stage with cryogenic propellant.

Following a partial loading of the tanks earlier this month, the team is now resuming the seventh of the eight tests in the Green Run series being completed with the Artemis I core stage. Upon completion of the wet dress rehearsal, the team will spend a few days analyzing data to determine if NASA is ready to proceed with the final Green Run test: the hot fire when all four engines will ignite simulating the countdown and launch of the Artemis I mission.

NASA will set a date for the hot fire after the wet dress rehearsal is complete. For an update at the conclusion of wet dress rehearsal, check back at this blog or visit the Green Run web site: https://www.nasa.gov/artemisprogram/greenrun

NASA and the Canadian Space Agency (CSA) finalized an agreement between the United States and Canada to collaborate on the Gateway, an outpost orbiting the Moon that will provide vital support for a sustainable, long-term return of astronauts to the lunar surface as part of NASA’s Artemis program. This Gateway agreement further solidifies the broad effort by the United States to engage international partners in sustainable lunar exploration as part of the Artemis program and to demonstrate technologies needed for human missions to Mars.

Under this agreement, CSA will provide the Gateway’s external robotics system, including a next-generation robotic arm, known as Canadarm3. CSA also will provide robotic interfaces for Gateway modules, which will enable payload installation including that of the first two scientific instruments aboard the Gateway. The agreement also marks NASA’s commitment to provide two crew opportunities for Canadian astronauts on Artemis missions, one to the Gateway and one on Artemis II.

NASA Administrator Jim Bridenstine and the Government of Brazil Minister of Science, Technology, and Innovation (MCTI) Marcos Pontes signed a joint statement of intent during a virtual meeting on Dec. 14, 2020. The statement describes Brazil’s intention to be the first country in South America to sign the Artemis Accords. Brazil has expressed interest in potentially contributing a robotic lunar rover – in addition to conducting lunar science experiments and other investigations – as part of NASA’s Artemis program.

NASA is proceeding with Green Run testing of the Artemis I core stage at the agency’s Stennis Space Center near Bay St. Louis, Mississippi. After refining the procedures for test operations, NASA is planning to conduct a full wet dress rehearsal next week.

On Dec. 5, engineers powered up the stage to start wet dress rehearsal testing and successfully conducted an initial propellant loading on Dec. 7. This partial loading showed the stage performed well and has given the NASA and Boeing team a valuable opportunity to practice loading procedures and monitor the Artemis I core stage as it is exposed to cryogenic, or supercold, liquids for the first time. While performing operations to load liquid oxygen propellant earlier in the day, data showed the temperature of the propellant was warmer than planned, and the NASA and Boeing team paused the test to take a closer look at the data before committing to loading all 700,000 gallons of propellant. The team proceeded with loading a limited amount of liquid hydrogen, cooled to minus 423 degrees Fahrenheit, without any issues.

After an integrated assessment of the core stage and the facility, the team identified processes and equipment that could be modified to keep the liquid oxygen at the proper temperature during delivery to the stage. The team is now implementing these changes while Stennis personnel replenish propellants and other commodities needed to run the full wet dress rehearsal.

Tune in to nasa.gov/live at 12 p.m. EST Thursday, Dec. 10 to for more details on the upcoming test in the Green Run testing series for the Space Launch System (SLS) rocket’s core stage that will fly on the agency’s Artemis I mission.

Check back at this blog for the date of the full wet dress rehearsal and other updates on Green Run testing.

NASA has selected 18 astronauts from its corps to form the Artemis Team and help pave the way for the next astronaut missions on and around the Moon as part of the Artemis program.

“I give you the heroes who will carry us to the Moon and beyond – the Artemis Generation,” said Vice President Mike Pence. “It is amazing to think that the next man and first woman on the Moon are among the names that we just read. The Artemis Team astronauts are the future of American space exploration – and that future is bright.”

Operations are continuing, and the team will refine the procedures and resume the wet dress rehearsal test in the coming days. The core stage performed well, and there are no issues with the stage, the B-2 test stand, or other facilities at Stennis.

The purpose of the test is to complete first-time operations using the new facilities and new rocket stage and adjust processes as necessary. The wet dress rehearsal is the seventh of eight Green Run tests being performed on the Artemis I core stage. Check back at this blog for more updates.