NASA’s Space Launch System (SLS) rocket and Orion spacecraft are undergoing integrated testing inside the Vehicle Assembly Building at NASA’s Kennedy Space Center in Florida to ensure they are “go” for launch of the Artemis I mission early next year.

After stacking the Orion atop the SLS rocket, the engineers completed several tests to ensure the rocket and spacecraft are ready to roll to the launch pad ahead of the Artemis I wet dress rehearsal. These tests included ensuring Orion, the core stage, and boosters can communicate with the ground systems and verification testing to make sure all the pieces of the rocket and spacecraft can power up and connect to the consoles in the Launch control Center.

During a recent core stage power test, engineers identified an issue with one of the RS-25 engine flight controllers. The flight controller works as the “brain” for each RS-25 engine, communicating with the SLS rocket to provide precision control of the engine as well as internal health diagnostics. Each controller is equipped with two channels so that there is a back-up, should an issue arise with one of the channels during launch or ascent. In the recent testing, channel B of the controller on engine four failed to power up consistently.

The controller had powered up and communicated successfully with the rocket’s computers during preliminary integrated testing, in addition to performing a full duration hot fire during Green Run testing with all four RS-25 engines earlier this year at NASA’s Stennis Space Center near Bay St. Louis, Mississippi. NASA and lead contractor for the RS-25 engines, Aerojet Rocketdyne, also test all RS-25 engines and flight controllers for Artemis missions at Stennis prior to integration with the rocket.

After performing a series of inspections and troubleshooting, engineers determined the best course of action is to replace the engine controller, returning the rocket to full functionality and redundancy while continuing to investigate and identify a root cause. NASA is developing a plan and updated schedule to replace the engine controller while continuing integrated testing and reviewing launch opportunities in March and April.

Verification testing of the Interim Cryogenic Propulsions Stage is ongoing along with closeouts of the boosters, and parallel work continues with core stage engineering testing. Communication end-to-end testing is underway, and countdown sequence testing will begin as early as next week to demonstrate all SLS and Orion communication systems with the ground infrastructure and launch control center. Integrated testing will culminate with the wet dress rehearsal at historic Launch Complex 39B. NASA will set a target launch date after a successful wet dress rehearsal test.

SLS will be the most powerful rocket in the world and is the only rocket that can send Orion, astronauts, and supplies to the Moon in a single mission. With the Artemis missions, NASA will land the first woman and the first person of color on the Moon and establish long-term exploration in preparation for missions to Mars. SLS and Orion, along with the commercial human landing system and the Gateway that will orbit the Moon, are NASA’s backbone for deep space exploration. 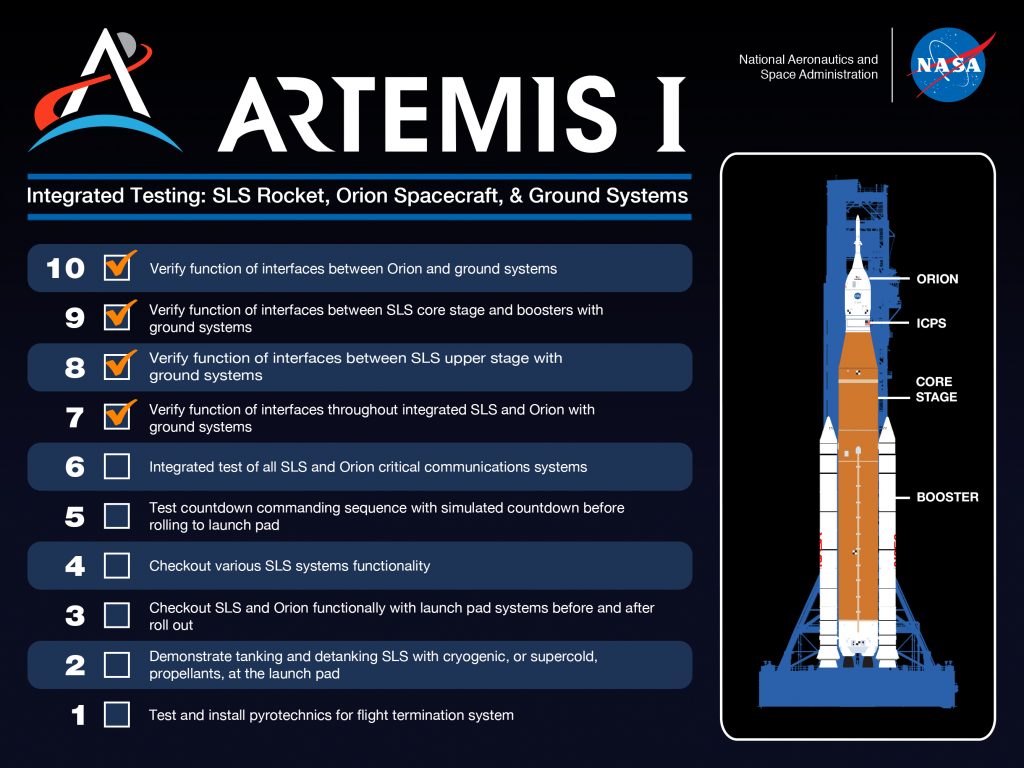 On Dec. 8, 2021, a NASA transporter moved the adapter which was built at NASA’s Marshall Space Flight Center by lead contractor Teledyne Brown Engineering in Huntsville, Alabama. Teams recently completed applying the spray-on foam insulation that will protect the rocket hardware during flight. Now, crews will outfit the inside of the adapter with platforms that will allow teams to access the inside during assembly with the rest of the rocket. Technicians will also install special systems that allow the adapter and the core stage to separate from the Interim Cryogenic Propulsion Stage, or ICPS. The adapter connects the rocket’s core stage to the ICPS, which provides the power to perform the trans-lunar injection maneuver to send the Orion spacecraft to the Moon. This adapter is for the Artemis II mission that will be the first to return American astronauts to lunar orbit.

A team of NASA and Northrop Grumman engineers fired a 2-foot-diameter, subscale solid rocket booster on Dec. 2, 2021, at NASA’s Marshall Space Flight Center in Huntsville, Alabama. This test, conducted in Marshall’s East Test Area, was the second of three tests supporting the Booster Obsolescence and Life Extension (BOLE) program, which will have an upgraded design to power the evolved configuration of the Space Launch System (SLS) rocket on flights after Artemis VIII.

The BOLE booster will be a larger and more powerful solid rocket motor than the current SLS solid rocket booster. The boosters for the first eight flights of the Artemis program repurpose the steel booster cases and parts from the Space Shuttle Program with an upgraded design. The BOLE booster will implement a composite case design, replace obsolete parts with newer components, and improve the booster’s design and performance.

This test focused on the booster motors, which provide the majority of the power to launch SLS. Unlike previous subscale motor tests, this marked the first time the team could evaluate insulation and nozzle on one motor rather than two configurations, one for the nozzle and one for the insulation. During this subscale test, the motor produced 76,400 pounds of thrust.

The original test design had two segments, each 9 feet long. To get a more characteristic thrust profile, a 4.5-foot-long segment was added to the test article, totaling nearly 28 feet and making this the longest subscale motor tested to date. In addition to the added half segment, a new propellant, aft dome design, and nozzle design are included in the BOLE motor development program that will become part of the Block 2 evolved rocket.

During the test, three different internal case insulation formulations were evaluated in the aft dome. The performance results of these materials will aid in selecting a final formulation for the first full-scale test fire of the BOLE booster. As the team completes the final design for the full-scale motor, this test is an important step in learning how materials will perform at the higher pressure and performance expected for the BOLE motor as compared to current motors.

The third test of the subscale motor is currently scheduled for spring 2022 at Marshall, followed by the first full-scale BOLE motor test, tentatively scheduled for spring 2024 at Northrop Grumman’s test facility in Utah. Northrop Grumman, lead contractor for the booster, helped conduct the Marshall test and will be assisting with data evaluation.