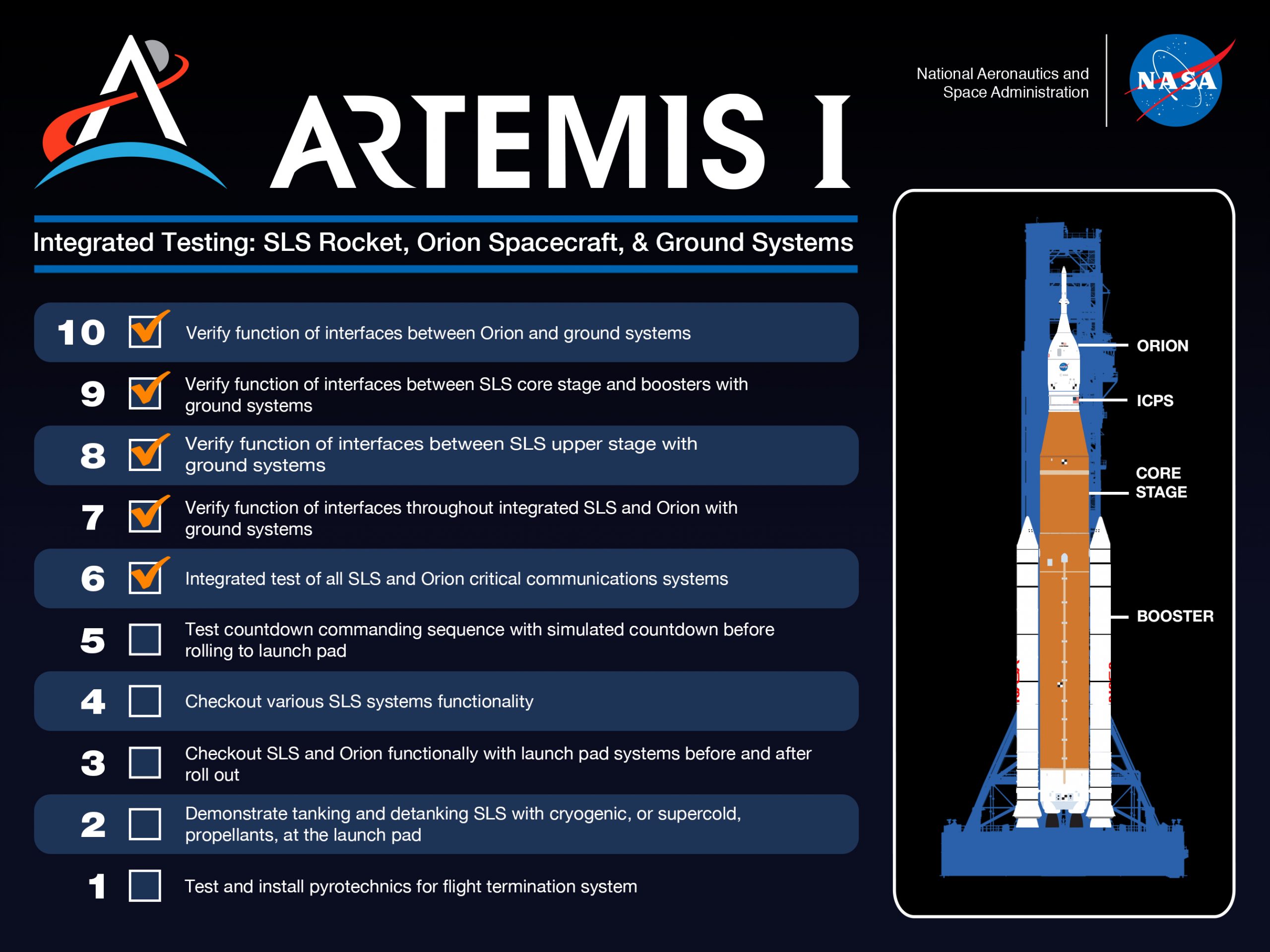 Engineers and technicians continue to complete integrated tests inside the Vehicle Assembly Building at NASA’s Kennedy Space Center as part of the lead up to launch of the Artemis I mission.

On Dec. 17, the team completed a communications end-to-end test to ensure the rocket, spacecraft and ground equipment can communicate with the consoles in the launch and mission control centers. This verification of communication systems via radio frequency ensures the launch team will be able to monitor the Space Launch System (SLS) rocket and Orion spacecraft on the ground as well as during flight. The test used an antenna in the VAB, another near the pad that will cover the first few seconds of launch, as well as a more powerful antenna that uses the Tracking Data Relay Satellite and the Deep Space Network.

On Dec. 20, the Exploration Ground Systems team conducted a countdown sequencing test to demonstrate the ground launch software and ground launch sequencer, which checks for health and status of the vehicle sitting on the pad. The simulated launch countdown tested the responses from SLS and Orion, ensuring the sequencer can run without any issues. On launch day, the ground launch sequencer hands off to the rocket and spacecraft and an automated launch sequencer takes over around 30 seconds before launch. Engineers have added a second sequencing test before rollout to account for differences between the emulator and flight hardware identified during the initial test.

Last week engineers and technicians successfully removed and replaced an engine controller from one of four RS-25 engines after the team identified an issue during a power-up test of the rocket’s core stage. Engineers are now performing standard engine controller diagnostic tests and check-outs, including controller power-up and flight software load. Subsequently, the team will work to complete all remaining SLS pre-flight diagnostic tests and hardware closeouts in advance of a mid-February rollout for a wet dress rehearsal in late February. NASA will set a target launch date after a successful wet dress rehearsal test.

SLS will be the most powerful rocket in the world and is the only rocket that can send Orion, astronauts, and supplies to the Moon in a single mission. With the Artemis missions, NASA will land the first woman and the first person of color on the Moon and establish long-term exploration in preparation for missions to Mars. SLS and Orion, along with the commercial human landing system and the Gateway that will orbit the Moon, are NASA’s backbone for deep space exploration.