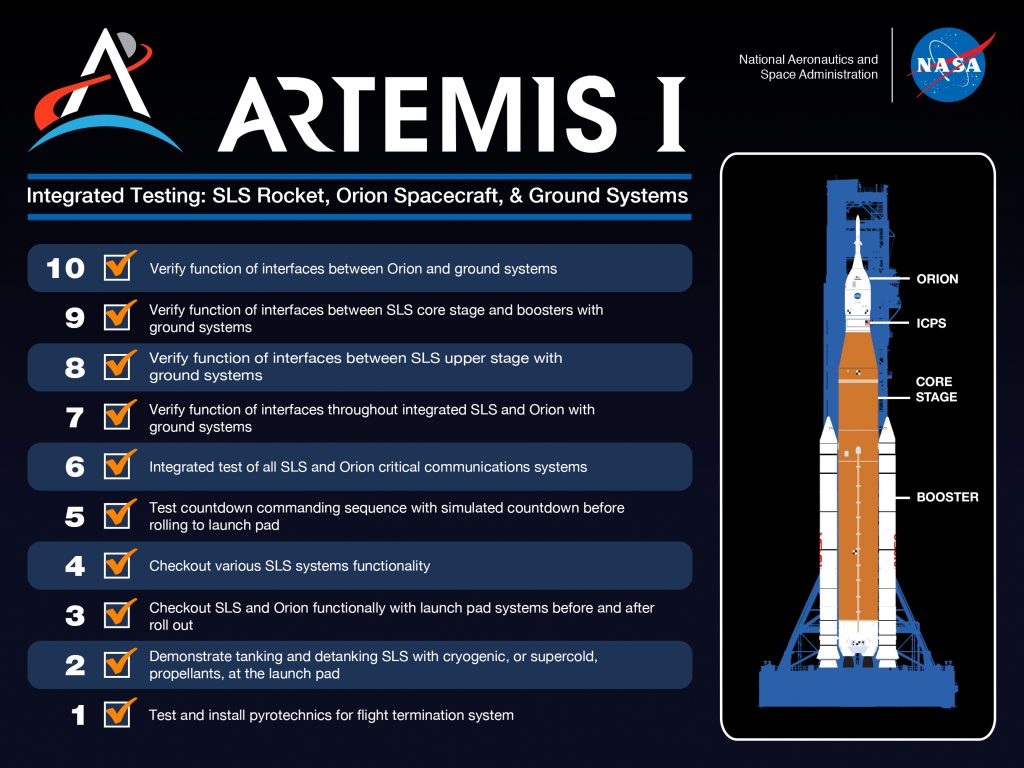 At approximately 2:30 p.m. ET, NASA’s Space Launch System (SLS) rocket and Orion spacecraft for the Artemis I mission were firmly secured inside the Vehicle Assembly Building (VAB) at Kennedy Space Center after a four-mile journey from launch pad 39B that began at 4:12 a.m. ET Saturday, July 2.

Over the next several days, the team will extend work platforms to allow access to SLS and Orion. In the coming weeks, teams will replace a seal on the quick disconnect of the tail service mast umbilical and perform additional checkouts and activities before returning to the pad for launch.

At approximately 4:12 a.m. ET today, NASA’s Artemis I Moon rocket atop the crawler-transporter left launch pad 39B and began its 4-mile trek to the Vehicle Assembly Building (VAB) at NASA’s Kennedy Space Center in Florida.

Once inside the VAB, teams will replace a seal on the quick disconnect of the tail service mast umbilical to address a liquid hydrogen leak detected during the wet dress rehearsal, along with planned forward work as the Space Launch System and Orion spacecraft are readied for launch.

Watch a live stream of the rocket arriving at VAB on the Kennedy Newsroom YouTube channel and check back here for updates.

At approximately 12:10 a.m. EDT on June 6, NASA’s Artemis I Moon rocket began its journey from Kennedy Space Center’s Vehicle Assembly Building (VAB). Poised atop its crawler transporter, the Space Launch System rocket and Orion spacecraft will make the 4-mile journey to launch pad 39B to undergo the next wet dress rehearsal test attempt.

Live stream views of the departure from VAB and the arrival at the pad will be available on the Kennedy Newsroom YouTube channel.

At approximately 5:30 p.m. ET today, NASA’s Artemis I Moon rocket atop the crawler-transporter is scheduled to leave launch pad 39B and begin its 4-mile trek to the Vehicle Assembly Building (VAB) at NASA’s Kennedy Space Center in Florida.

Once inside the VAB, teams will work on replacing a faulty upper stage check valve and a small leak within the tail service mast umbilical ground plate housing on the mobile launcher while the supplier for the gaseous nitrogen makes upgrades to their pipeline configuration to support Artemis I testing and launch. Following completion, teams will return to the launch pad to complete the next wet dress rehearsal attempt.

The NASA Kennedy Twitter account will release an update once the roll has begun. Watch a live stream of the rocket departing the pad and arriving at VAB on the Kennedy Newsroom YouTube channel and check back here for updates.

Teams at NASA’s Kennedy Space Center in Florida are preparing the Space Launch System (SLS) rocket and Orion spacecraft for their return to the Vehicle Assembly Building (VAB) early next week. As work continues at the launch pad throughout the weekend, we will also continue working closely with our commercial crew partners to confirm a date and time. The transition is underway to move from the testing configuration to the roll back formation needed to return to the VAB. This process includes offloading hydrazine from the twin solid rocket boosters and disconnecting the rocket and spacecraft from the ground systems infrastructure at the launch pad. The core stage propellant was drained shortly after completing the last test attempt. The rocket and spacecraft remain in a safe configuration and will soon be placed atop the crawler-transporter for the 4-mile trek to the VAB.

Inside the VAB, engineers will repair a faulty helium check valve and a hydrogen leak on the mobile launcher while the supplier for the gaseous nitrogen makes upgrades to their pipeline configuration to support Artemis I testing and launch.

While most objectives associated with the wet dress rehearsal were met during recent testing, teams plan to return to the launch pad when repairs and checkouts in the VAB are complete for the next full wet dress test attempt. Following completion of the test, SLS and Orion will return to the VAB for the remaining checkouts before rolling back out to the pad for launch.

Watch a live stream of the rocket on the Kennedy Newsroom YouTube channel and check back here for updates.

Teams concluded today’s wet dress rehearsal test at approximately 5:10 p.m. EDT after observing a liquid hydrogen (LH2) leak on the tail service mast umbilical, which is located at the base of the mobile launcher and connects to the rocket’s core stage. The leak was discovered during liquid hydrogen loading operations and prevented the team from completing the test.

Before ending the test, teams also met test objectives for the interim cryogenic propulsion stage by chilling down the lines used to load propellant into the upper stage. They did not flow any propellant to the stage because of an issue with a helium check valve identified several days ago.

When teams paused propellant loading, the rocket’s core stage liquid oxygen tank was about 49% filled and the liquid hydrogen tank had been loaded to about 5% capacity prior to the hydrogen leak.

Teams are now working to drain propellant from the rocket. They will inspect the umbilical connection, review data, and establish a go-forward plan to address the hydrogen leak.

NASA plans to host a media teleconference April 15 to provide updates on troubleshooting and next steps for the wet dress rehearsal test.

While loading liquid hydrogen (LH2) on the rocket’s core stage earlier this afternoon, engineers detected a leak on the tail service mast , which is located at the base of the mobile launcher and connects to the core stage.

Though engineers stopped loading LH2 and liquid oxygen (LOX) on the core stage, the launch director gave approval for teams to chill down the ICPS LH2 lines to collect additional data and have completed that activity. Engineers will not load LH2 or LOX into the ICPS tanks, due to an issue with a helium check valve experienced several days ago. When teams paused propellant loading earlier today, there was about 49% of LOX on the core stage and about 5% of LH2 was loaded into the core stage tank prior to the hydrogen leak.

The terminal countdown will also not occur today due to the modified configurations and delays with propellant loading. Teams are reassessing the next steps and will determine a go-forward plan following today’s test.

Following the completion of slow fill for liquid hydrogen (LH2), teams encountered an issue when they started fast fill operations for LH2. After fast fill on LH2 began, a surge in pressure automatically stopped the flow of liquid hydrogen. Teams are working to troubleshoot this issue and the rocket is in a safe configuration. In the meantime, liquid oxygen flow was paused on the core stage to ensure the tanking operations for LOX and LH2 remain synchronized.

After fast fill resumes for liquid hydrogen to the core stage, teams will load minimal cryogenic propellants on the interim cryogenic propulsion stage. Because of an issue with a helium check valve found several days ago, teams will chill down the lines used to load propellant into the upper stage but not flow any actual propellant to the stage.

The clock is continuing to count down for now, and the team will work to re-synchronize the operations timeline and clock during a planned T-10-minute hold at which point the launch team will establish a new T-0.

The mission management team for Artemis I met this morning to review the status of operations and continues to press ahead toward terminal countdown for the wet dress rehearsal test. Meteorologists with the U.S. Space Force Space Launch Delta 45 currently predict favorable weather conditions for tanking on April 14. There is currently a 5% chance of lightning within five nautical miles of the launch pad when tanking begins. Weather constraints stipulate there must be less than a 20% chance lightning within 5 nautical miles of pad during the first hour of tanking. Winds must not be above 37.5 knots and the temperature cannot be below 41 degrees Fahrenheit.

Later today teams will perform a pre-launch walkdown of the rocket and ensure the Space Launch System’s core stage is prepared for the upcoming loading operations.

NASA will provide live updates on the Exploration Ground Systems Twitter account. NASA is also streaming live video of the rocket and spacecraft at Launch Pad 39B on the Kennedy Newsroom YouTube channel.