Today’s Enceladus flyby is a bit more adventurous than most satellite flybys by Cassini.
We are dipping into the jet of water vapor and ice spewing from Enceladus’ south pole, because by doing so we can take full advantage of the amazing opportunity to study
fresh samples from inside this strange world.  The mass spectrometer, dust, and plasma
instruments will be running flat-out, gathering priceless information on the composition
of the gases and the ice particles for the sixty seconds or so that Cassini will be in
the dense part of the plume. 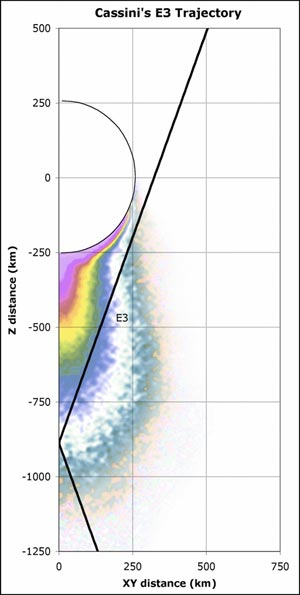 Plume particles are wonderful things to study, but it’s possible to have too much of a
good thing – at the speed that Cassini is going, particles as small as a millimeter in
size could cause serious damage to the spacecraft if we ran into one.  So the decision to
enter the plume was not taken lightly.  The project convened an “Enceladus plume working group”, led by fellow-blogger Amanda Hendrix, which held a series of meetings to determine whether there was any hazard to the spacecraft from flying as close as we plan to go.  Though we fly 50 kilometers (30 miles) above Enceladus’ surface, this happens near the equator and away from the plumes–the closest approach to the source of the plumes is more like 200 kilometers (120 miles)–see the graphic on the left by David Seal (E3 is the official name of today’s Enceladus flyby).

We know from the Cassini images, and from observations from the dust detector during the July 2005 flyby, that there are many ice particles a few microns (a few 1000ths of a
millimeter) in diameter in the parts of the plume we’ll be traversing, and these provide
juicy samples without posing any hazard.  But was there any way that much bigger
particles could be lofted into Cassini’s path?  We reviewed the observational evidence,
and theories about how the plumes might work (for instance, figuring out how much gas it would take to accelerate an ice grain of a dangerous size to a speed high enough to reach the spacecraft) and we decided that the danger was very small.  Still, it will be good to hear from the spacecraft when it turns its antenna back to Earth and sends home word that the flyby was safely negotiated.  That will be at 7:05 p.m. Pacific time this evening, not that I’m counting…

Future flyby plans could probe even deeper into the plume, coming as close as 100 kilometers (62 miles) from the source on November 2, 2009 (though this depends on official approval of the proposed extended mission).  But we’ll review the results from this flyby before committing to anything that close.  If Cassini reports “come on in, the water’s fine!”, as we expect, we’ll dip our toes in a little further next time.

11 thoughts on “Dipping Our Toes”