As the hours tick down and Cassini gathers data during our closest flyby yet of Enceladus I am thinking about the two Voyager flybys of the Saturn system that took place over 25 years ago.  How in the world did we miss the Enceladus plumes back then???

In a nostalgic mood, I am looking over some of my old Voyager timelines today.  (Yes, I actually kept all of my old timelines from each Voyager flyby)!  I see that we took pictures of Enceladus during the first Voyager flyby in 1980, discovering a tiny, sparsely cratered world at the heart of the E ring. I remember wondering how such a tiny moon could create such a huge, tenuous ring.  That mystery was one of the puzzles left for Cassini to solve.  Remember that Cassini is in orbit around Saturn so we do multiple flybys, but the Voyagers only flew by Saturn, and each only had one encounter with Enceladus in their itinerary. 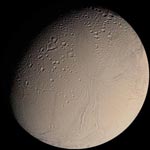 My timelines show that we planned to take more pictures of Enceladus during the Voyager flyby in 1981.  Alas, the Voyager 2 scan platform containing the cameras and spectrometers stuck just as we flew close to Saturn, and the observation of our outbound pictures and spectra of Enceladus (and everything else!) were never made.  I remember feeling sad about how much unique data we wouldn’t get on that fateful day and the days that followed.  What discoveries remained for some other lucky scientists to make, I wondered?  Little did I know that I would be one of those lucky scientists! Good thing Cassini is there to keep an eye on Enceladus!

5 thoughts on “Enceladus – Then and Now”