This is a neat movie (click here to download or click here to watch it) put together by Brent Buffington, on the Cassini Navigation team. I love these kinds of movies, because you can really get a good idea of what the spacecraft is doing during a flyby. Everything goes pretty fast, so you may want to watch this a few times to really absorb what’s going on!

In the big left-hand window (you can see a still from the first frame of the movie below), you can see Cassini and a projection of the active (or “prime”) instrument’s field-of-view (FOV) (see key below). The right-hand windows show a view of what the boresights are seeing. Sometimes they’re staring, sometimes they’re scanning. Generally, since the optical remote sensing (ORS) instruments are pretty much bore-sighted (as shown in the upper right window), that means that when one of them is “prime,” the others are “riding along” and also getting data, resulting in a wonderful multi-wavelength suite of measurements. 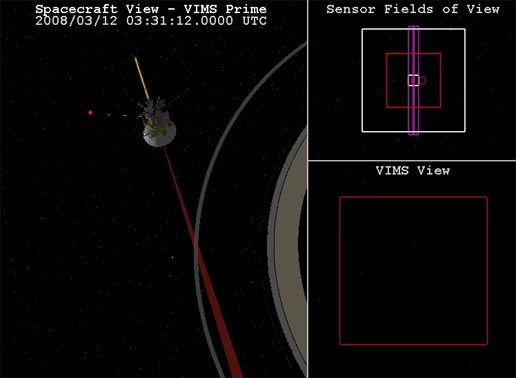 So we start off with a long, distant stare, with the Visual and Infrared Mapping Spectrometer (VIMS) prime. Even though Enceladus is still far away and small, staring for such a long time gives all the optical remote sensing instruments a nice chance to build up signal and get a good spectrum, useful especially for investigating surface composition.

After VIMS, ISS (i.e., the camera) takes over for a stare at Enceladus (notice that Enceladus is still smaller than a Narrow Angle Camera–NAC, here). Also notice that the phase angle is pretty high, meaning that the body is only partially illuminated and will appear as a crescent (not unlike our own Moon last night!).

After radar, the Composite Infrared Spectrometer (CIRS) is prime and does a scan and a stare to get temperature information, of the north polar region.

Then Ultraviolet Imaging Spectrograph (UVIS) does a slow scan of Enceladus to do surface composition (and potentially gas) measurements.

The Composite Infrared Spectrometer then does another scan (notice that we are getting pretty close to Enceladus and it’s looking bigger!).

For the final remote sensing observation before closest approach, the camera system does a three-panel mosaic of the cratered northern hemisphere. This will be our best look yet at this terrain.

After the cameras, the spacecraft does a big turn to put the in situ instruments’ sensors into the proper orientation for the closest approach (facing into the direction of motion, so they can “scoop up” particles around Enceladus). Remember that the closest approach (about 50 kilometers, or 31 miles) occurs near 20 degrees south latitude – not in the plume. About a minute after the closest-approach, we’ll be over the south pole and in the plume (at about 641 kilometers, or 398 miles). So we’re diving in the plume a little more than we’ve done before! The in situ instruments will get great measurements of particle size and composition, and gas composition, both in the plume and close to the surface of Enceladus.

Now, it isn’t obvious from this movie, but Enceladus goes into eclipse (i.e., it passes into the shadow behind Saturn), very close to the time that Cassini is making its closest approach, and remains in eclipse for a couple of hours. This is a prime opportunity for the Composite Infrared Spectrometer to do temperature mapping of the hot, active south pole region (which is now in view, after Cassini has swung through its closest approach), with no contribution or heating from solar illumination. The other remote sensing instruments will ride along, but without light from the sun, it isn’t clear exactly what they’ll measure – so that will be a surprise! While Enceladus is in eclipse is also a nice time to do radar measurements (radar doesn’t need the sun to illuminate the surface), which we do next, followed by another Composite Infrared Spectrometer scan, post-eclipse.

We complete the flyby with an Ultraviolet Imaging Spectrograph-prime stare at Enceladus (note that by this time, Enceladus is distant and small again), followed by a turn to Earth to downlink the data!

Key to instrument Field of Views: