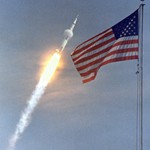 Arguably, no single event did more to inspire people around the world than the first moon landing by the crew of Apollo 11. This includes numerous astronauts, NASA engineers, and contractors inspired to go through rigorous scientific and engineering academic tracts after sitting in the living room of their house as children watching the fuzzy black-and-white image of Neil Armstrong move down the ladder of the lunar module and take humanity’s first steps onto another world.

That mission lifted off from Kennedy Space Center 45 years ago this morning with the moon landing and first steps taken four days later. (You can watch NASA’s launch videos here)

Mike Good, a veteran astronaut who works with the Commercial Crew Program and whose missions include spacewalks to repair NASA’s Hubble Space Telescope, put it this way when asked why he became an astronaut:

“I certainly remember as a little kid being influenced and inspired by the landing on the moon. I was 7 years old and watched it on a black-and-white TV in my living room. Like all the kids and everybody else, I thought that it was pretty cool. Then as I worked through school and got into college, I became interested in engineering. I made the decision to go into aerospace engineering in 1981, which was the first year that the space shuttle flew, so that definitely had an influence on me, too. I watched that and said, ‘You know, this is something that I’d like to be a part of.’ I didn’t necessarily think I was going to be an astronaut, but it was an industry that I wanted to be in. After college I went on to fly for the Air Force, and I was able to put the flying and engineering together, which are two things that I liked to do. After flying fighters for a while, I got to go through the Air Force’s test pilot school, which is really where you get to test new airplanes and weapons systems. From there, it was just kind of a natural progression to work toward the astronaut program. I put in a couple applications and finally got a call to come join.”