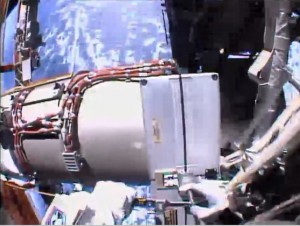 Today’s spacewalk by International Space Station astronauts Reid Wiseman and Barry “Butch” Wilmore, both from NASA, includes some of the first steps in the process of outfitting the station for the arrival of Commercial Crew Program partner spacecraft later this decade. Each spacewalker is wearing a helmetcam and you can watch the spacewalk live on NASA TV which is streaming here.

Using spacesuits dedicated to the demanding tasks of spacewalking, the astronauts are repositioning a camera and television equipment on the outside of the station. When completed, the reconfiguration of  of station systems and modules will make room for new docking adapters that will allow the new generation of American spacecraft to connect to the station and deliver crew members for the orbiting laboratory. The new spacecraft are integral in NASA’s plans to double the amount of research performed on the station.

**UPDATE: The spacewalk was completed on time Wednesday afternoon.