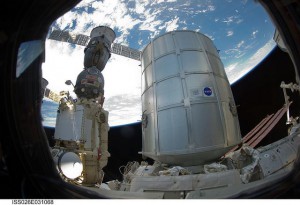 The relocation of the Permanent Multipurpose Module is complete. The PMM was robotically relocated from the Earth-facing port of the Unity module on the International Space Station to the forward port of the Tranquility module in the next step to reconfigure the complex for the future arrival of U.S. commercial crew vehicles. Robotic flight controllers at Mission Control, Houston, working in tandem with the Mobile Servicing System Operations Center at the Canadian Space Agency’s headquarters in St. Hubert, Quebec, Canada, used the Canadarm2 robotic arm to maneuver the 11-ton module a short distance to its new location. Expedition 43 Commander Terry Virts and Flight Engineer Scott Kelly of NASA supervised the commanding of the bolting of the PMM to Tranquility. The PMM’s hatch will be reopened tomorrow.