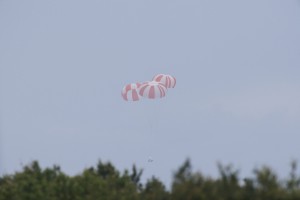 Following the successful pad abort test on May 6, SpaceX began developing a plan that would move its in-flight abort test to provide higher fidelity data and reduce risk to future crews launched to the International Space Station in the Crew Dragon spacecraft. In the updated plan, SpaceX would launch its uncrewed flight test, called DM-1, refurbish the flight test vehicle, then conduct the in-flight abort test prior to the crew flight test.  Using the same vehicle for the in-flight abort test will improve the realism of the ascent abort test and reduce risk. Further, the test would be performed from Kennedy Space Center’s historic Launch Complex 39A instead of from Vandenberg Air Force Base. To read more information about the plan, visit http://go.nasa.gov/1LVgAHH.