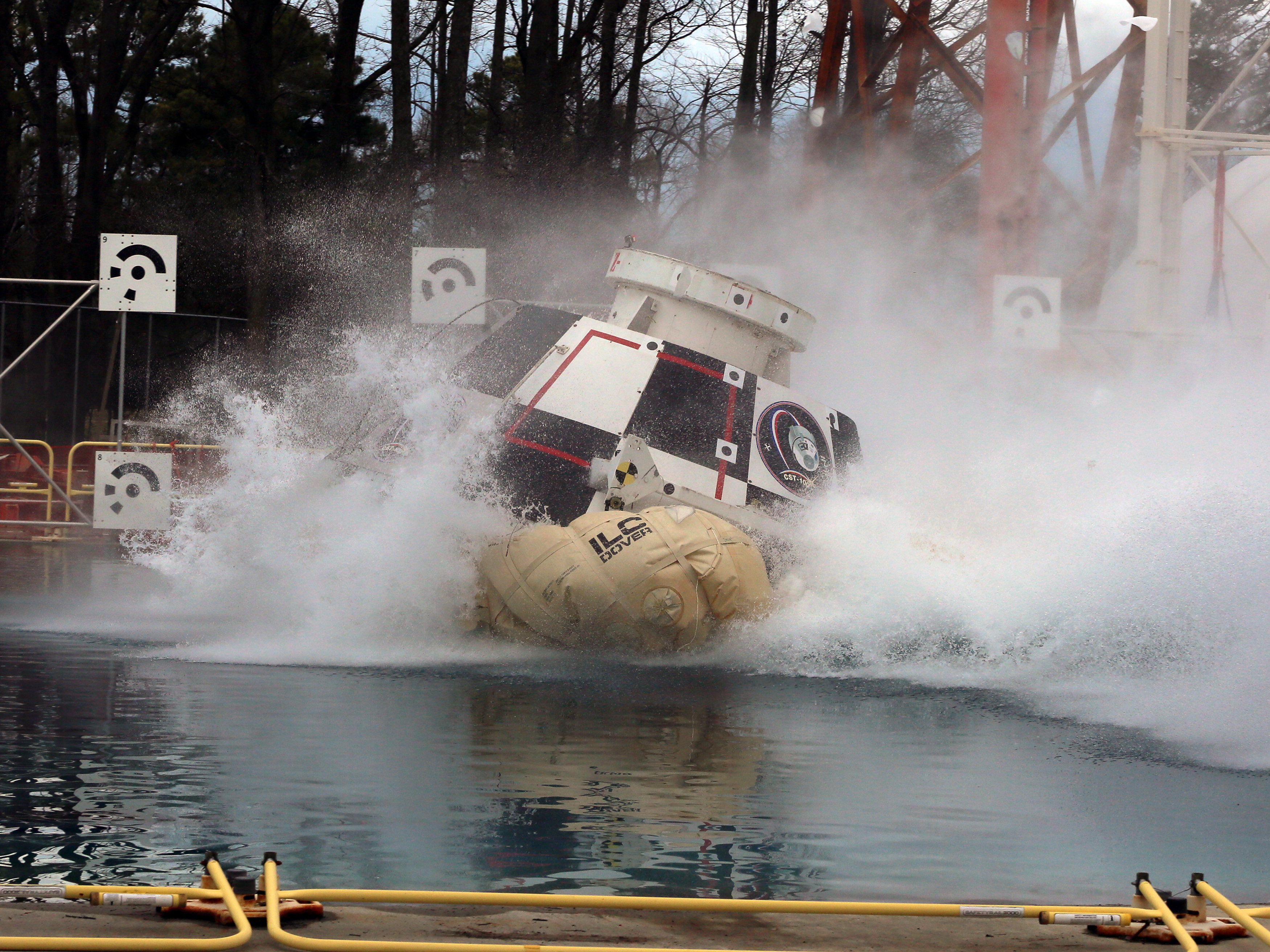 The Boeing CST-100 Starliner airbag system, which will provide a safe landing for the spacecraft during any phase of flight, was put to the test over the 20-foot-deep Hydro Impact Basin at NASA’s Langley Research Center in Hampton, Virginia, on Feb. 9. The Starliner is one of two commercial spacecraft in development to launch astronauts from the U.S. to the International Space Station via NASA’s Commercial Crew Program.

Six landing airbags, designed and manufactured by ILC Dover in Frederica, Delaware, were inflated before the full-size Starliner test article was hoisted up by a crane and then dropped from a height and angle that mimicked what the spacecraft might encounter as it pushes off an Atlas V rocket during a launch or ascent emergency. The goal for Boeing’s landing and recovery team is to achieve flight qualification status of the Starliner’s airbag and up-righting systems through a series of tests at Langley’s Hydro Impact Basin.

While the Starliner is designed for land-based returns, it is important for engineers to understand how the spacecraft and its systems would perform in all landing scenarios. 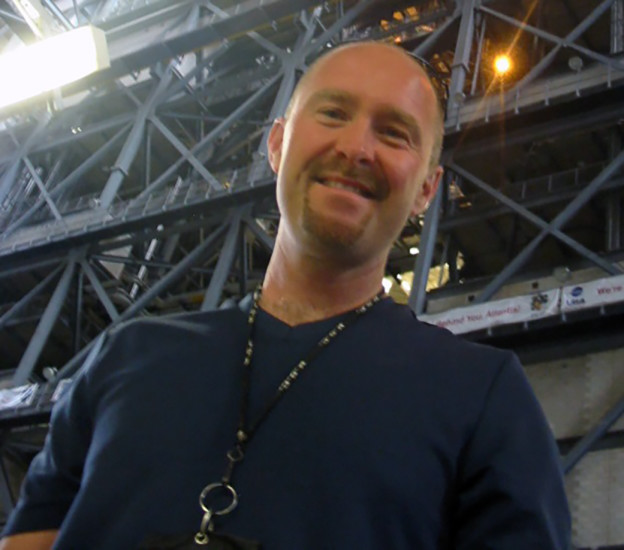 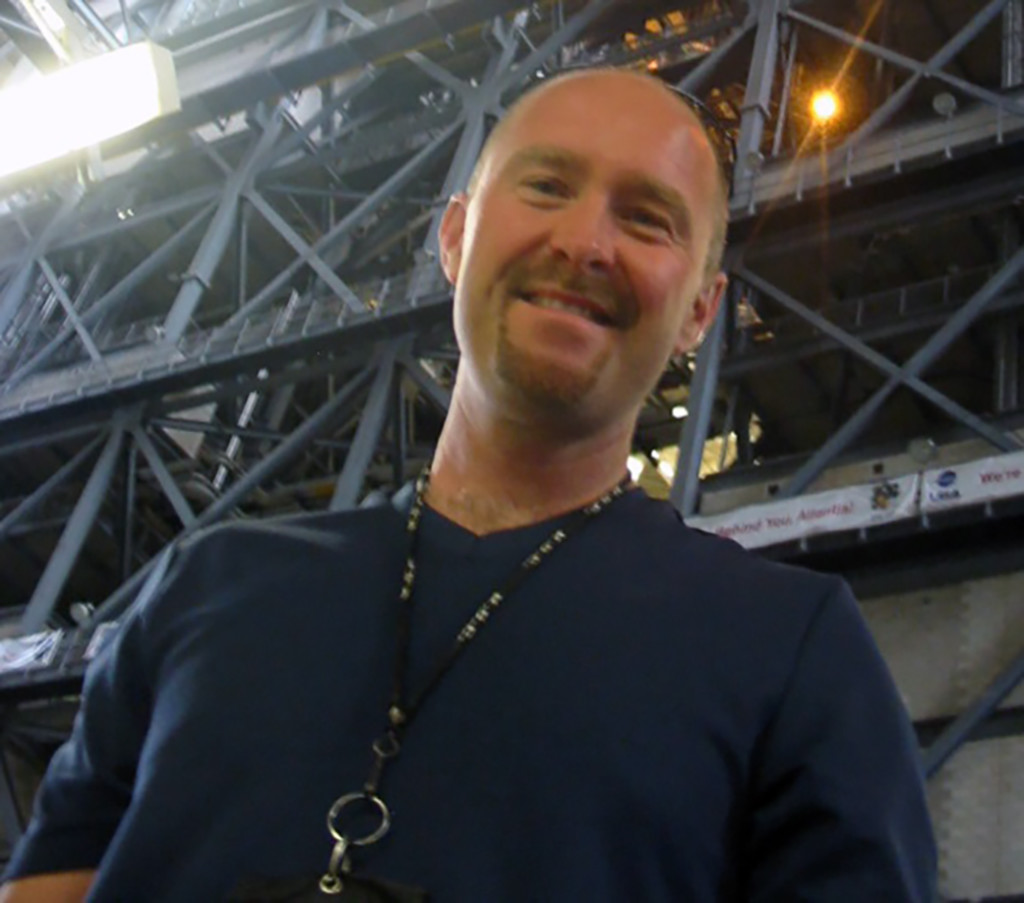 One of the engineers NASA depends on to assess the landing systems of the next generation of human-rated spacecraft brings 14 years of experience working with parachutes on launch systems, as well as years of skydiving. Learn how Jeff Thon is uniquely helping shape the future of NASA’s Commercial Crew Program at http://go.nasa.gov/1Qmbc0v 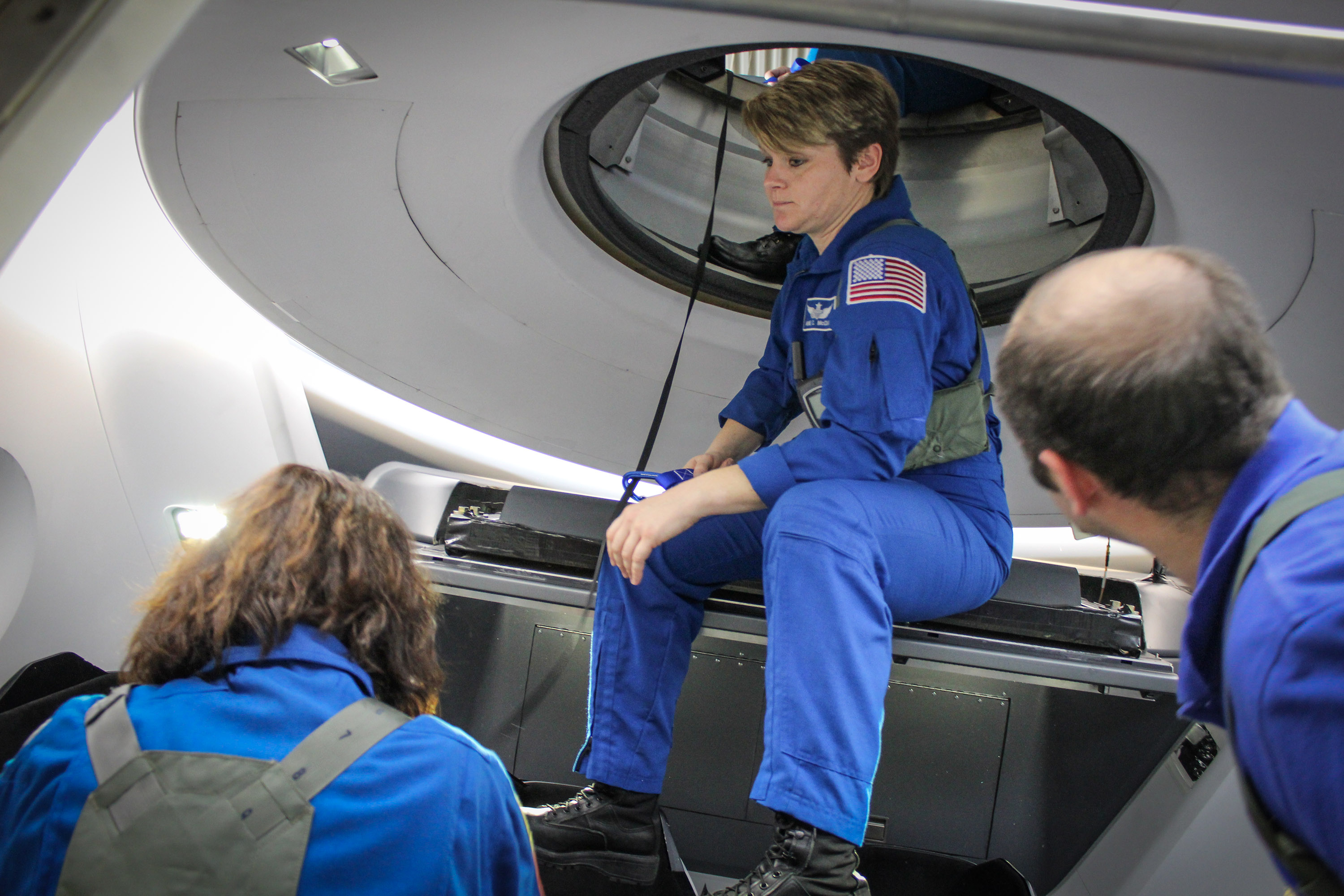 Astronaut Anne McClain takes part in egress training for the Crew Dragon at SpaceX’s Hawthorne, California, headquarters recently as part of a larger team of astronauts and engineers evaluating processes for the new generation of American spacecraft in development to carry astronauts to the International Space Station. Working inside a mock-up built by SpaceX to simulate the actual spacecraft, the team practices leaving the spacecraft through the top hatch of the Crew Dragon as well as using the side hatch. The work is common in assessing spacecraft design. For astronauts, such rehearsals are regular exercise in mission preparations even in spacecraft that have been flying regularly. 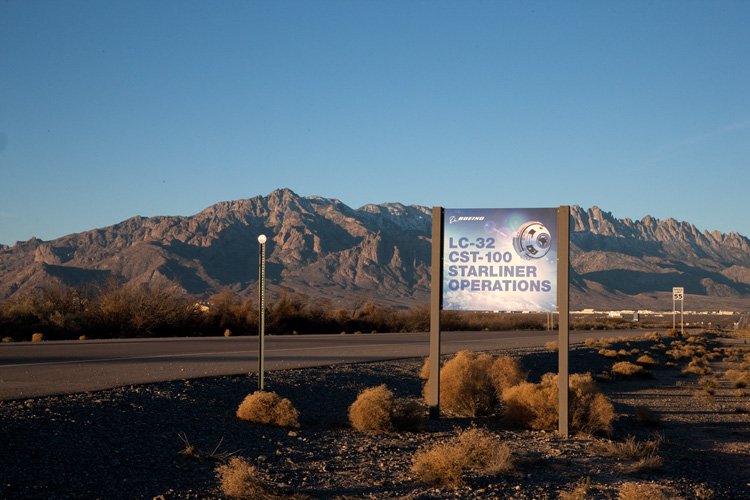 Boeing’s Chris Ferguson highlighted the area at White Sands, New Mexico, where the company will perform a pad abort test of its CST-100 Starliner in 2017. White Sands has been the site of numerous systems tests for a wide variety of spacecraft systems for years. The Starliner is designed with four large engines in its service module that can fire quickly to lift the spacecraft and astronauts aboard out of danger, whether that be away from the launch pad or during ascent into orbit. 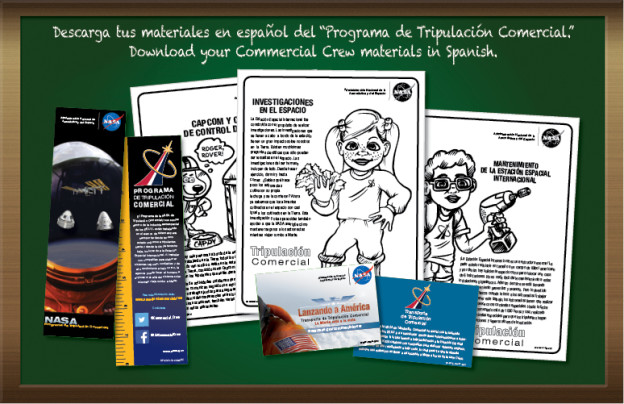 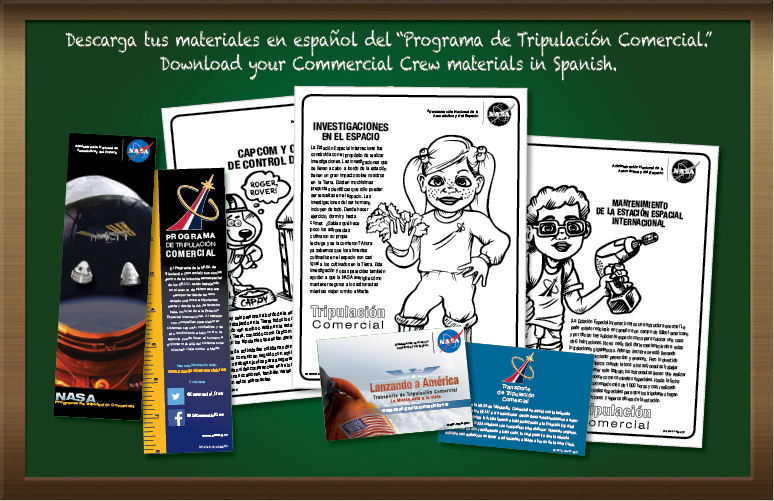 We’ve posted Commercial Crew collector cards, bookmarks and coloring sheets in Spanish, so get yours today! All are informative, fun, easy to download, read, color and share! You can download them from these links or at https://www.nasa.gov/content/for-fun 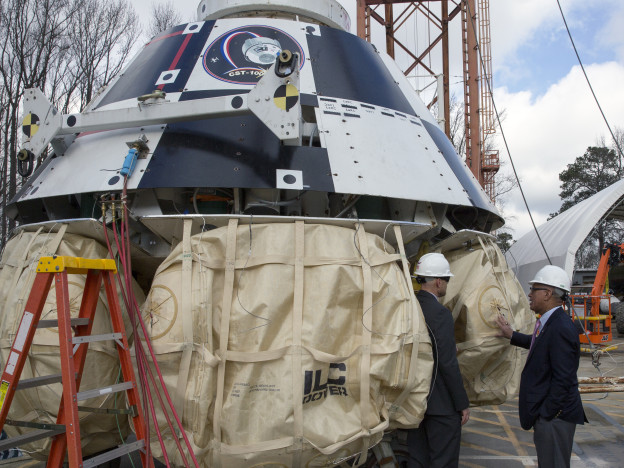 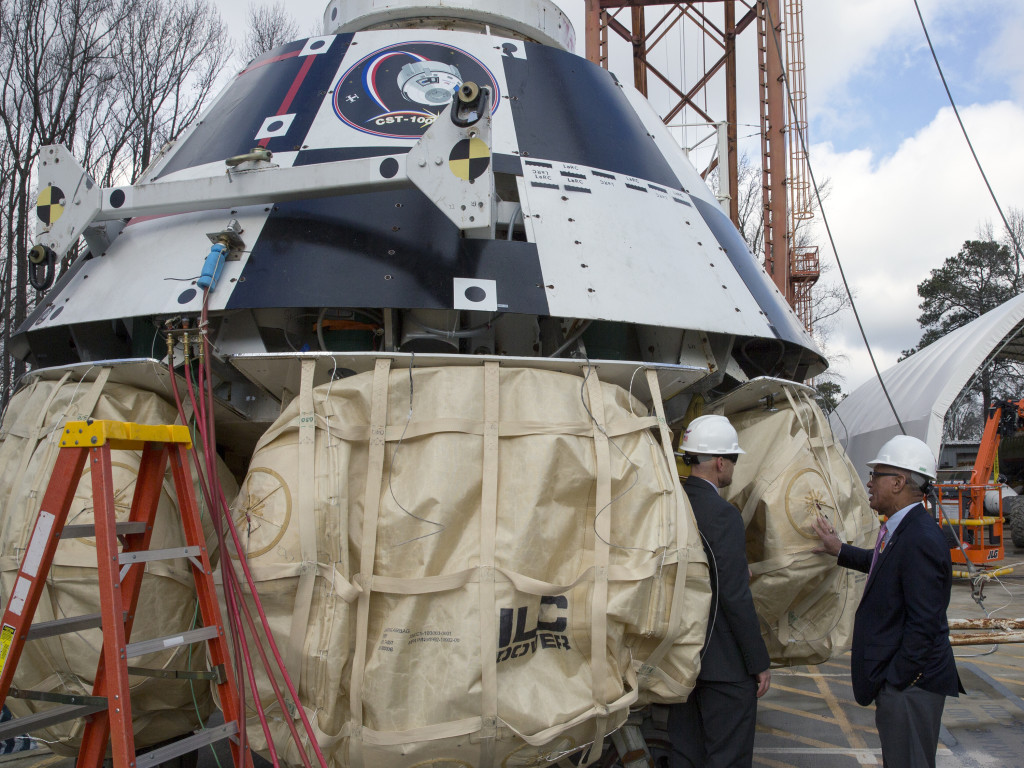 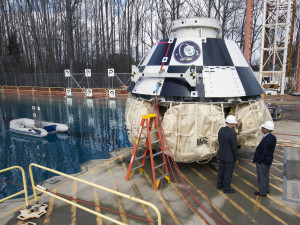 Although it’s designed to land on land, Boeing is testing the Starliner at Langley’s Hydro Impact Basin to evaluate its tendencies in case it has to land in the water in the event of, for example, an unlikely launch or ascent emergency that calls for the spacecraft to separate from its rocket and parachute itself and the astronauts inside to safety. Starliner is being developed in partnership with NASA to carry up to four astronauts at a time to the International Space Station. An additional crew member will allow science time on the orbiting laboratory to double for NASA’s Journey to Mars and research that will benefit everyone on Earth.

Bolden visited Langley to deliver his annual “State of NASA” address during which he detailed aspects of the agency’s budget request. 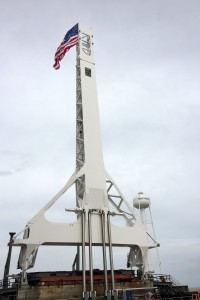