Learn about the first flights of Boeing’s Starliner and SpaceX’s Crew Dragon with and without astronauts on board, and what they will accomplish for NASA and its commercial partners.

Take a sneak peak inside Boeing’s Starliner and SpaceX’s Crew Dragon, and learn about what went into designing the next generation of human-rated spacecraft. 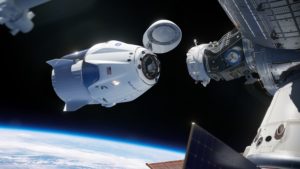 We are finalizing plans with SpaceX for launch day operations at Launch Complex 39A at NASA’s Kennedy Space Center as they prepare for the company’s first flight test with astronauts on board.

A key question the program and the company have been assessing is whether the astronauts will climb aboard the Crew Dragon spacecraft before or after SpaceX fuels the Falcon 9 rocket. NASA has made the decision to move forward with SpaceX’s plan to fuel the rocket after the astronauts are in place. While the agreement makes this plan the baseline for operations, it is contingent upon NASA’s final certification of the operation. Learn more: https://go.nasa.gov/2Mwl1mh

Hear from the five astronauts who will be the first to flying Boeing’s Starliner and SpaceX‘s Crew Dragon to the International Space Station on the companies’ flight tests in 2019!

Today, NASA announced the astronauts who will launch aboard new American-made spacecraft and rocket systems, the first human launches from the United States since 2011. Nine U.S. astronauts, eight NASA and one from Boeing, were assigned to the first test flights and operational missions for Boeing’s CST-100 Starliner and SpaceX’s Crew Dragon in partnership with NASA’s Commercial Crew Program.

The astronaut assignments are:

This public-private partnership marks the beginning of a new era of human spaceflight. NASA has worked closely with Boeing and SpaceX as the companies design, develop, and test their systems to ensure safe, reliable and cost-effective commercial transportation for astronauts to low-Earth orbit. This will be an unprecedented achievement for the commercial space industry, and will allow NASA to focus on deep space exploration with NASA’s Orion spacecraft and Space Launch System, as we return humans to the Moon and on to Mars.

Boeing’s crew flight test aboard its Starliner spacecraft, which is targeted to launch in mid-2019, will have Eric Boe, Chris Ferguson and Nicole Mann on board. Boeing’s first post-certification mission will have Josh Cassada and Suni Williams aboard.

SpaceX’s demo mission 2 aboard its Crew Dragon spacecraft, which is targeted to launch in April 2019, will have Bob Behnken and Doug Hurley aboard. The first post-certification mission will be crewed by Victor Glover and Mike Hopkins.

Do you have questions for our elite astronauts? They will take your questions during a Reddit Ask Me Anything at 12:30 p.m. Eastern, at https://www.reddit.com/r/IAmA/.

These two NASA astronauts will launch to the International Space Station for a long-duration mission aboard SpaceX’s Crew Dragon spacecraft atop its Falcon 9 rocket from Launch Pad 39A at Kennedy Space Center.

Victor Glover is from Pomona, California. He is Navy commander, Naval aviator and test pilot with almost 3,000 hours flying in more than 40 different aircraft, 400 carrier landings and 24 combat missions. He was selected as part of the 2013 astronaut candidate class, and this his will be his first spaceflight.

Mike Hopkins was born in Lebanon, Missouri, and grew up on a farm near Richland, Missouri. He is a Colonel in the Air Force, where he was a flight test engineer before being selected as a NASA astronaut in 2009. He’s spent 166 days on the International Space Station for Expeditions 37 and 38, and conducted two spacewalks.

Josh Cassada grew up in White Bear Lake, Minnesota. He is a Navy Commander and test pilot with more than 3,500 flight hours in more than 40 aircraft. He was selected as an astronaut in 2013. This will be his first spaceflight.

Suni Williams was born in Euclid, Ohio, but her hometown is Needham, Massachusetts. Suni came to NASA from the Navy, where she was a test pilot and rose to the rank of Captain. Since being selected as an astronaut in 1998, she has spent 322 days in space, commanded the International Space Station and performed seven spacewalks.

Targeted to launch in April 2019 aboard a SpaceX Crew Dragon spacecraft atop a Falcon 9 rocket from Launch Pad 39A at Kennedy Space Center in Florida.

Bob Behnken is from St. Ann, Missouri. He has a doctorate in engineering, is a flight test engineer, and Colonel in the Air Force. He joined the astronaut corps in 2000, and flew aboard space shuttle Endeavour twice – for the STS-123 and STS-130 missions, during which he performed six spacewalks, for a total of more than 37 hours.

Targeted to launch in mid-2019 aboard a Starliner spacecraft atop a United Launch Alliance Atlas V rocket from Space Launch Complex 41 at Cape Canaveral Air Force Station in Florida.

Eric Boe was born in Miami but grew up in Atlanta. He came to NASA from the Air Force, where he was a fighter pilot and test pilot and rose to the rank of Colonel. He was selected as an astronaut in 2000, and piloted space shuttle Endeavour for the STS-126 mission, and Discovery on its final flight, STS-133.

Chris Ferguson is a native of Philadelphia. He is a retired Navy captain, who piloted space shuttle Atlantis for STS-115, and commanded shuttles Endeavour and Atlantis on STS-126 and STS-135 – the final flight of the space shuttle program. He retired from NASA in 2011, and has been an integral part of Boeing’s CST-100 Starliner program.

Nicole Aunapu Mann is a California native and a Lieutenant Colonel in the Marine Corps.  She is an F/A-18 test pilot with more than 2,500 flight hours in over 25 aircraft. She was selected as an astronaut in 2013, and this will be her first trip to space.