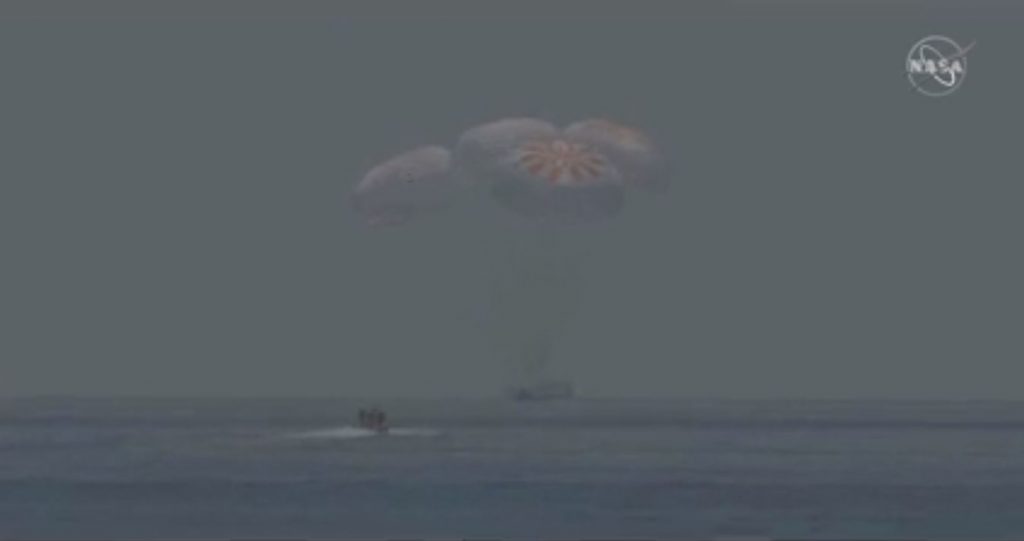 NASA’s SpaceX Demo-2 mission has ended with the Crew Dragon spacecraft successfully splashing down in the Gulf of Mexico off the coast of Pensacola, Florida. NASA astronauts Robert Behnken and Douglas Hurley remain safely inside the spacecraft as recovery ships move toward them. This is the first return of a commercially built and operated American spacecraft carrying astronauts from the International Space Station.

“And Endeavour, on behalf of the SpaceX and NASA teams, welcome back to planet Earth, and thanks for flying SpaceX,” said SpaceX Crew Operations and Resources Engineer (CORE) Mike Heiman.

The Crew Dragon undocked from the International Space Station yesterday at 7:35 p.m. EDT, ending more than two months of docked operations at the orbiting laboratory during NASA’s SpaceX Demo-2 mission. Hurley and Behnken arrived at the orbiting laboratory in the Crew Dragon May 31 following a launch from NASA’s Kennedy Space Center in Florida on May 30 – the first flight of American astronauts on an American-built spacecraft from American soil in nearly a decade.

Demo-2 tested the performance of the entire SpaceX crew transportation system, from launch to docking to splashdown. It was the final flight test for the system to be certified for regular crew flights to the station as part of NASA’s Commercial Crew Program.