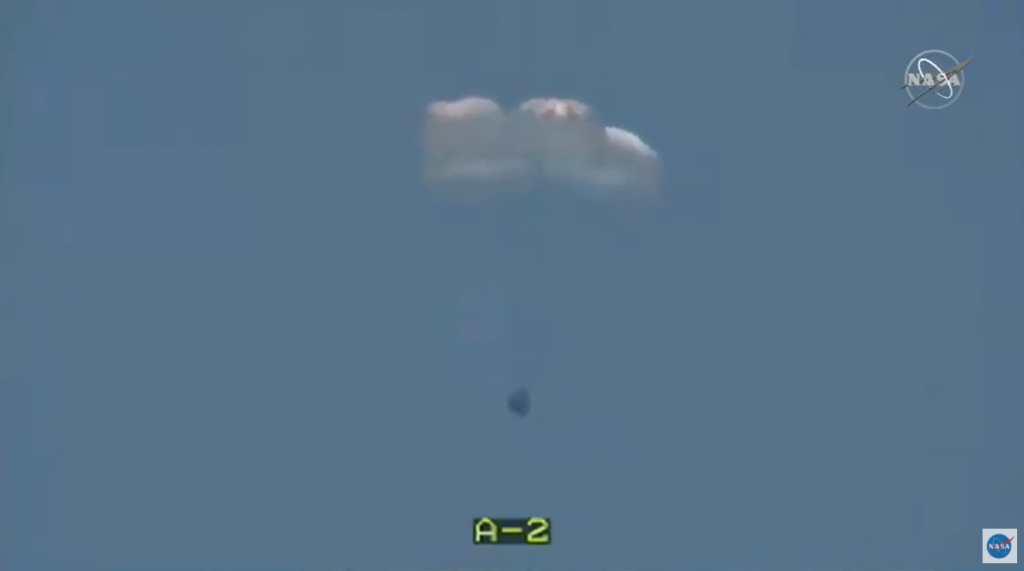 Under the canopy of its four main parachutes, the Crew Dragon spacecraft carrying NASA astronauts Robert Behnken and Douglas Hurley is descending toward a splashdown in the Gulf of Mexico off Pensacola, Florida. Recovery ships are standing by. NASA’s SpaceX Demo-2 mission, the final flight test for the SpaceX crew transportation system for the agency’s Commercial Crew Program, is nearly complete.

As expected, controllers have acquired the signal from the SpaceX Crew Dragon and spoken with astronauts Robert Behnken and Douglas Hurley.

The SpaceX Crew Dragon is entering an expected, temporary communications blackout now as the spacecraft, with NASA astronauts Robert Behnken and Douglas Hurley aboard, continues on its path back to Earth. As Dragon Endeavour enters the atmosphere and the capsule reaches temperatures around 3500 degrees Fahrenheit, the friction builds up plasma around the spacecraft, preventing data from being sent or received. Communications is expected to be re-established before splashdown.

Splashdown off the coast of Pensacola, Florida, is expected at approximately 2:48 p.m. EDT.

The Crew Dragon carrying NASA astronauts Robert Behnken and Douglas Hurley is continuing its journey from Earth orbit to a splashdown off the coast of Pensacola, Florida. The spacecraft currently is flying 132 miles above the Pacific Ocean and will soon cross Central America on its course toward the Gulf of Mexico.

The SpaceX Crew Dragon’s nosecone has closed in preparation for re-entry. The spacecraft is on its way toward a splashdown in the Gulf of Mexico off the coast of Pensacola, Florida, at approximately 2:48 p.m. EDT.

The deorbit burn is complete, and the SpaceX Crew Dragon is on its way back to Earth with NASA astronauts Robert Behnken and Douglas Hurley. Splashdown off the coast of Pensacola, Florida, is expected at approximately 2:48 p.m. EDT. The spacecraft’s nosecone will be closed in the next few minutes.

The Crew Dragon undocked from the International Space Station yesterday at 7:35 p.m. EDT, ending more than two months of docked operations at the orbiting laboratory during NASA’s SpaceX Demo-2 mission. Hurley and Behnken arrived at the orbiting laboratory in the Crew Dragon May 31 following a launch from NASA’s Kennedy Space Center in Florida on May 30.

This is SpaceX’s final test flight and is providing data on the performance of the Falcon 9 rocket, Crew Dragon spacecraft and ground systems, as well as in-orbit, docking, splashdown, and recovery operations.

The SpaceX Crew Dragon’s four forward-bulkhead Draco thrusters have ignited for the deorbit burn, an 11-and-a-half-minute burn to slow the spacecraft’s forward speed and begin its descent to Earth. Splashdown off the coast of Pensacola, Florida, is expected at about 2:48 p.m. EDT.

The unpressurized trunk section of the Crew Dragon has separated from the spacecraft. The next major milestone will be the deorbit burn, coming up in about five minutes. On board the Crew Dragon, NASA astronauts Robert Behnken and Douglas Hurley are wrapping up their time in space on the agency’s SpaceX Demo-2 mission, which included more than two months at the International Space Station.

The SpaceX Crew Dragon spacecraft carrying NASA’s SpaceX Demo-2 crew members, NASA astronauts Robert Behnken and Douglas Hurley, is slated to begin the trip back to Earth today at the conclusion of an end-to-end flight test to the International Space Station. NASA and SpaceX are targeting splashdown in the Gulf of Mexico off the coast of Pensacola, Florida, at approximately 2:48 p.m. EDT. This is the first return of a commercially built and operated American spacecraft carrying astronauts from the International Space Station.

Weather conditions remain within the splashdown weather criteria and are “Go” at the primary targeted site.

Coming up, the Crew Dragon’s trunk will separate from the spacecraft, followed by the deorbit burn, which begins at 1:56 p.m. EDT. The “Go” for the deorbit burn was relayed to the crew at 12:58 p.m. EDT by SpaceX Crew Operations and Resources Engineer (CORE) Mike Heiman.

Here is a look at the upcoming milestones (all times Eastern):

The Crew Dragon undocked from the International Space Station yesterday at 7:35 p.m. EDT, ending 63 days of docked operations at the orbiting laboratory. Hurley and Behnken arrived at the orbiting laboratory in the Crew Dragon May 31 following a launch from NASA’s Kennedy Space Center in Florida on May 30 – the first flight of American astronauts on an American-built spacecraft from American soil in nearly a decade.

Demo-2 tested the performance of the entire SpaceX crew transportation system, from launch to docking to splashdown. It was the final flight test for the system to be certified for regular crew flights to the station as part of NASA’s Commercial Crew Program.

More details about the return can be found in the Top 10 Things to Know for NASA’s SpaceX Demo-2 Return.

NASA astronauts Robert Behnken and Douglas Hurley are just hours away from splashdown in the Gulf of Mexico off the coast of Florida. Splashdown remains scheduled for 2:48 p.m. EDT following a nearly two-month test flight of the SpaceX Crew Dragon spacecraft as part of NASA’s Commercial Crew Program.

Pensacola, Florida remains the prime location with Go Navigator as the recovery vessel. The recovery boat departed its port at 9:20 a.m. to stage for recovery operations in the Gulf of Mexico. Go Navigator is operating with a fully functioning generator and is ready to support splashdown operations this afternoon. Earlier this morning, a backup generator failed on the recovery ship prior to leaving port, but that is not considered an impact for normal recovery operations. The recovery vessel still has full capability to safely recover the spacecraft and crew.

The duo arrived at the International Space Station on May 31, following a successful launch on May 30 on a SpaceX Falcon 9 rocket from NASA’s Kennedy Space Center in Florida. During their 62 days aboard station, Behnken and Hurley contributed more than 100 hours of time to supporting the orbiting laboratory’s investigations, participated in public engagement events, and supported four spacewalks with Behnken and Cassidy to install new batteries in the station’s power grid and upgrade other station hardware.

More details about the return can be found in the Top 10 Things to Know for NASA’s SpaceX Demo-2 Return and the splashdown weather criteria fact sheet.