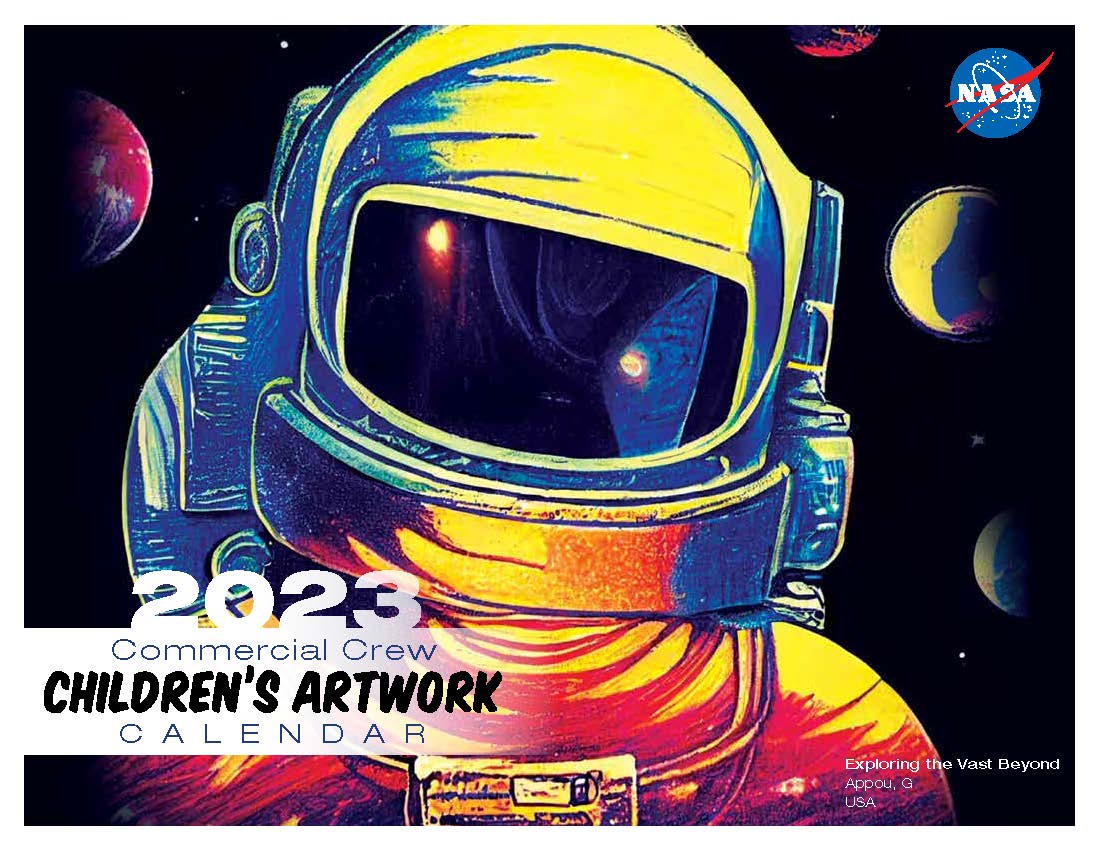 Young artists, ages 4-12 years old, from all over the world came together to make NASA’s 2023 Commercial Crew Program Children’s Artwork Calendar contest the biggest one yet!

Children from the United States, India, South Korea, and all points in between submitted 2,260 works of art for this year’s contest, which ran from Sept. 2 through Oct. 27. These pint-sized Picassos submitted unique and original artwork featuring NASA themes such as rockets and spacecraft, astronauts, living and working in space, and exploring the solar system. 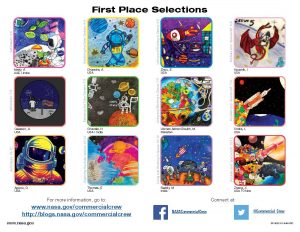 The CCP art contest began in 2015 to celebrate the creativity and vision of the next generation of space explorers. NASA’s Commercial Crew Program works with American companies to build new rockets and spacecraft for launching astronauts into space, to the International Space Station. The spaceships launch from Florida and take astronauts about 250 miles above the surface of Earth to space station to perform experiments that make our lives better and prepare future astronauts for longer missions to the Moon, Mars and beyond.

NASA’s Commercial Crew Program thanks all the young artists and families who reached for the stars and made this year’s calendar truly stellar!

NASA will fly two astronaut test pilots aboard the agency’s Boeing Crew Flight Test (CFT) mission to the International Space Station, where they will live and work off the Earth for about two weeks.

CFT commander Barry “Butch” Wilmore, whom NASA assigned to the prime crew in October 2020, will join NASA astronaut Suni Williams, who will serve as pilot. Williams previously served as the backup test pilot for CFT while assigned as commander of NASA’s Boeing Starliner-1 mission, Starliner’s first post-certification mission. As CFT pilot, Williams takes the place of NASA astronaut Nicole Mann, originally assigned to the mission in 2018. NASA reassigned Mann to the agency’s SpaceX Crew-5 mission in 2021.

NASA astronaut Mike Fincke, whom the agency previously assigned as the Joint Operations Commander for CFT, will now train as the backup spacecraft test pilot and remains eligible for assignment to a future mission. Fincke’s unique expertise will continue to benefit the team as he retains his position as flight test lead, filling a vital role in Starliner certification.

The entries are in for NASA’s Commercial Crew Program (CCP) 2022 International Children’s Artwork Contest, and the artwork we received is out of this world!

The contest – which ran from Nov. 15, 2021 through Jan. 6, 2022 – asked young artists ages 4-12 years old from all around the world to submit unique and original masterpieces featuring NASA themes such as spacecraft, astronauts, rockets, living and working in space, and exploring the solar system. Young artists from 33 countries submitted over 700 works of art! Entries were judged on originality and composition, and a total of 45 entrants were selected including first, second, and third place winners in each theme and age category to have their artwork displayed in Astronaut Crew Quarters at NASA’s Kennedy Space Center in Florida, where Commercial Crew astronauts quarantine before launching into space.

In addition to the CCP Digital Art Gallery below, the winning entries were also combinedhttps://cms.nasa.gov/feature/commercial-crew-artwork-contest to create three printable posters available for download (optimized for standard printing sized 11″ x 17″).

Please take a look at this year’s winning artwork and celebrate the amazing creativity of these young artists by sharing the Digital Gallery on social media using #NASA #CCPArtContest!

The CCP art contest began in 2017 to celebrate the creativity and vision of the next generation of space explorers. NASA’s Commercial Crew Program works with American companies to build new rockets and spacecraft for launching astronauts into space, to places like the International Space Station. The spaceships launch from Florida and take astronauts about 250 miles above the surface of Earth to perform experiments that make our lives better and prepare future astronauts for longer missions to places like asteroids and Mars.

The crew also will chat about their missions and highlight upcoming activities at the space station during the 10-minute event, including plans for NASA’s SpaceX Crew-1 Crew Dragon port relocation, Rubins’ return to Earth, the launch of Crew-2 and the upcoming return of Crew-1.

Kate Rubins is nearing her return home aboard a Soyuz on April 17. She will have spent 185 days in space on this Expedition and 300 days total, including her previous station flight. This will be the 4th most days in space by a U.S. female astronaut. She launched Oct. 14, 2020, along with Roscosmos cosmonauts Sergey Ryzhikov and Sergey Kud-Sverchkov.

Monday’s port relocation sets the stage for the agency’s SpaceX Crew-2 launch targeting 6:11 a.m. Thursday, April 22, and arrival at the space station the next day. Following a short handover, Crew-1 is scheduled to return Wednesday, April 28, weather and system dependent, splashing down about 12:35 p.m. aboard their Crew Dragon off the coast of Florida.

Crew-2 will be the first mission to fly two international partner crew members as part of NASA’s Commercial Crew Program.