Confirmation was received from Commander Shane Kimbrough that Crew Dragon, named Endeavour by the crew, is ‘go’ for launch! The next call will come at T-minus 45 minutes from the launch director. Weather looks good and we remain on target for a 5:49 a.m. EDT launch. 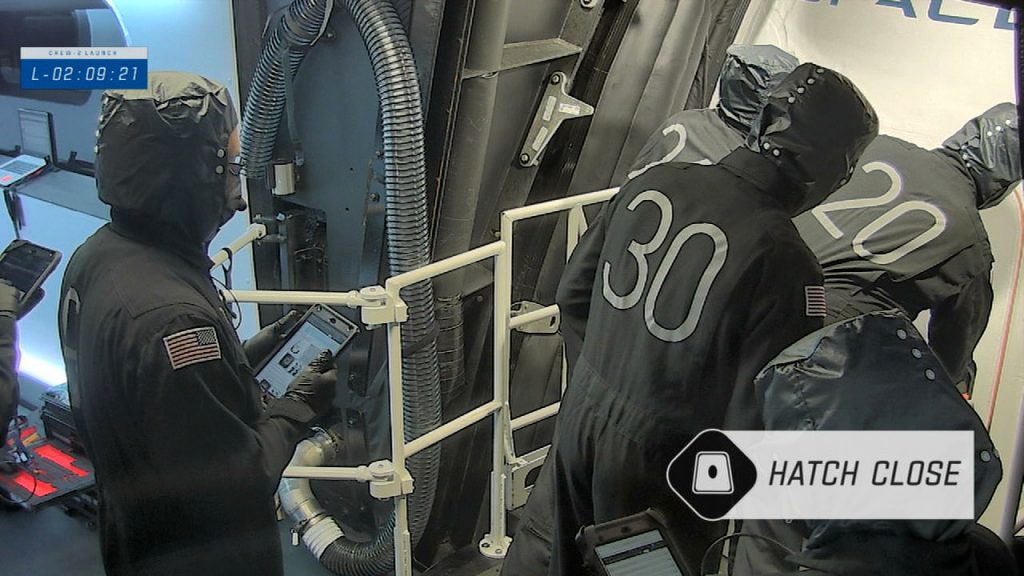 The hatch is now closed on the Crew Dragon spacecraft, named Endeavour by the Crew-2 astronauts. Liftoff for Shane Kimbrough, Megan McArthur, Akihido Hoshide, and Thomas Pesquet is just under two hours away (5:49 a.m. EDT).

The Crew-2 astronauts are in view inside the Crew Dragon spacecraft before the hatch was closed and secured.

Here is a sample of the Crew-2 playlists:

Crew-2 astronauts are now boarding the Crew Dragon spacecraft, Endeavour. As the astronauts board, their seats are configured in the upright position; later, prior to closure of the spacecraft’s side hatch, the seats will be rotated into a reclined position for flight.

NASA astronauts Shane Kimbrough and Megan McArthur, along with JAXA (Japan Aerospace Exploration Agency) astronaut Akihiko Hoshide, and ESA (European Space Agency) astronaut Thomas Pesquet, have arrived at Kennedy’s Launch Complex 39A, where the Crew Dragon spacecraft, Endeavour, is ready for them to climb in for launch. Liftoff is slated for 5:49 a.m. EDT.

In the next few minutes, they will take the elevator up the pad’s fixed service structure and walk down the air-conditioned crew access arm to the White Room, their final stop before climbing aboard.

Crew-2 astronauts Shane Kimbrough and Megan McArthur, along with JAXA (Japan Aerospace Exploration Agency) astronaut Akihiko Hoshide, and ESA (European Space Agency) astronaut Thomas Pesquet, are on their way to Kennedy Space Center’s Launch Pad 39A after departing the Neil Armstrong Operations and Checkout Building across the spaceport. They are right on schedule.

The crew’s vehicle is traveling in the middle of a convoy, including support team members and security personnel. At the launch site, the SpaceX Falcon 9 rocket and Crew Dragon spacecraft, named Endeavour by the crew, are ready for the astronauts’ arrival.

NASA’s SpaceX Crew-2 astronauts just walked out of the double doors below the Neil A. Armstrong Building’s Astronaut Crew Quarters and made their way out to the customized Tesla Model X cars that will take them to their spacecraft.