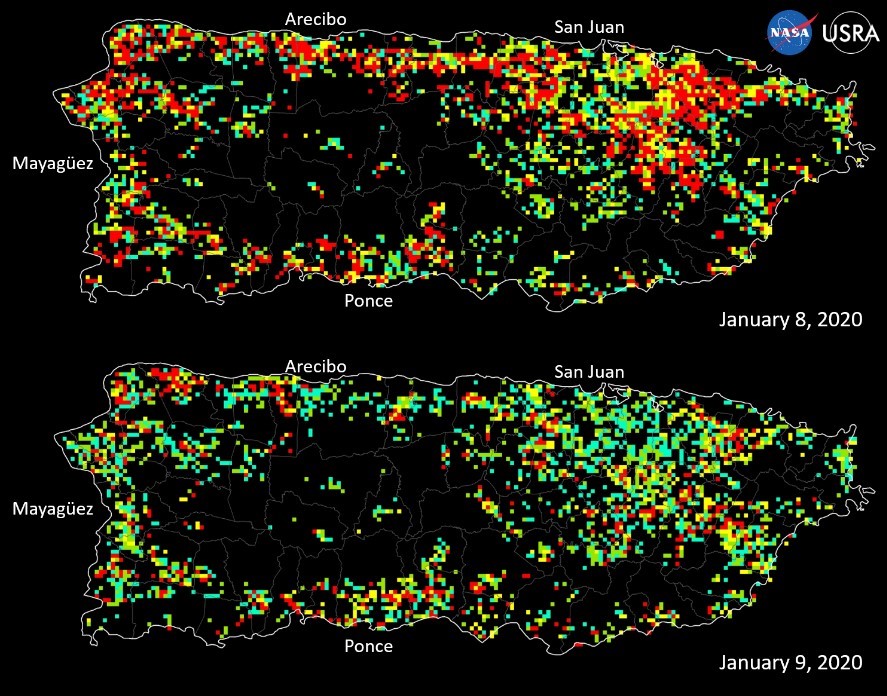 Starting Dec. 28, 2019, Puerto Rico was shaken by a series of hundreds of small earthquakes that culminated on Jan. 7 with a powerful 6.4 magnitude earthquake. This earthquake caused widespread damage to infrastructure, leaving more than 2,000 people in shelters, nearly 1 million without power, and hundreds of thousands without water.

NASA quickly mobilized to provide its expertise and satellite Earth-observing data in support of the response and recovery for this disaster. A team in the agency’s Earth Science Disasters Program began collecting information and coordinating with stakeholders, university partners, and the federal agencies leading the response effort. Agencies included the Federal Emergency Management Agency, the U.S. Geological Survey, the U.S. Department of Health and Human Services, and the Earthquake Engineering Research Institute. 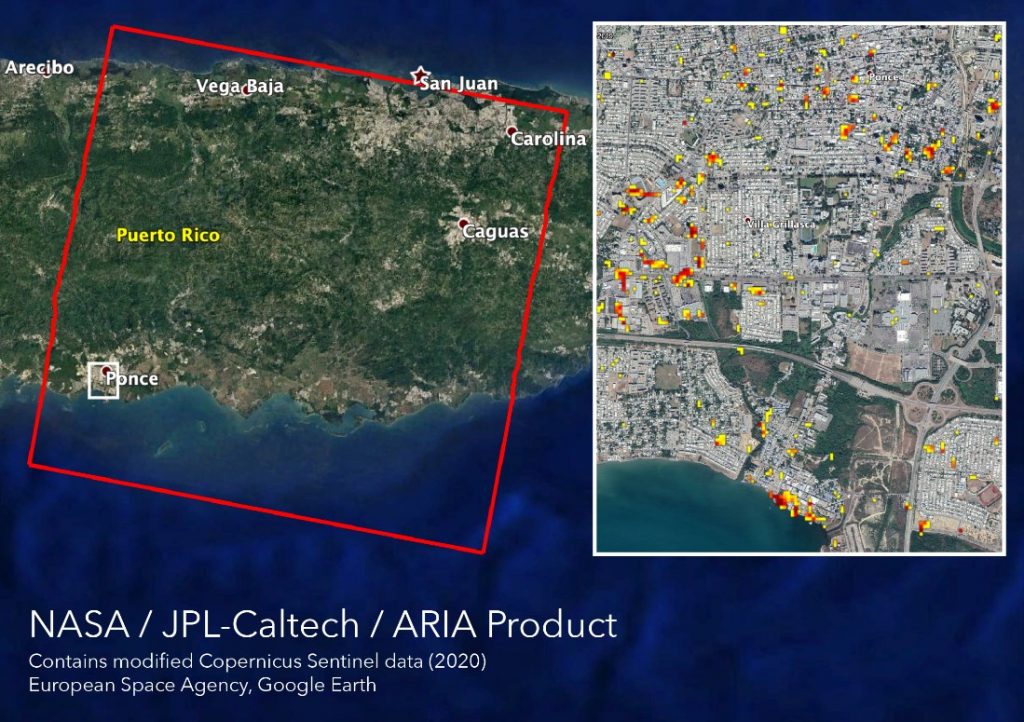 Damage proxy maps show structures that were likely damaged by the earthquake in red and yellow. The Ponce region of Puerto Rico is shown on Jan. 9 (above). The Guanica region is shown on Jan. 14 (below). Credit: NASA, JPL-Caltech, ESA 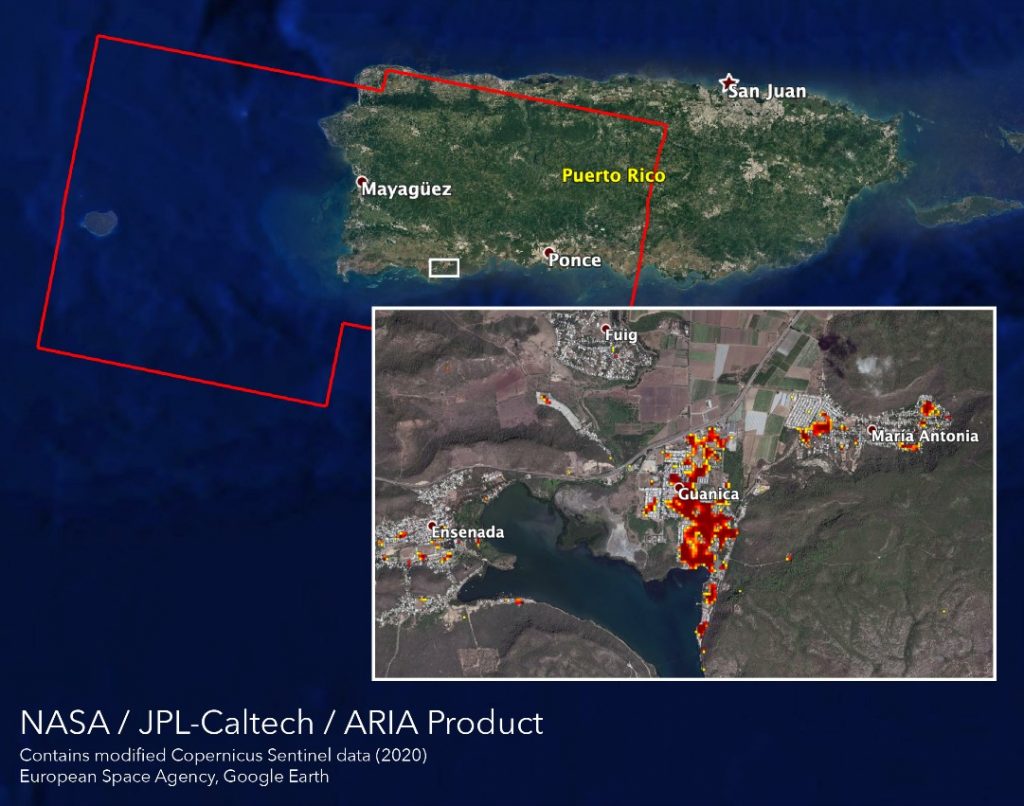 Several data products in support of the disaster response are posted in geographic information system (GIS) format on the NASA Disasters Mapping Portal, which allows the data to be more easily analyzed by other agencies and researchers.

The Advanced Rapid Imaging and Analysis team at NASA’s Jet Propulsion Laboratory and California Institute of Technology in Pasadena, California, have used Synthetic Aperture Radar data from several recent European Space Agency-operated Copernicus Sentinel-1 satellite overpasses of the region to identify potential damage to structures and displacement of the surface. Damage proxy maps can be used to identify damaged structures. Displacement maps show shifts in land surface due to the tectonic activity. 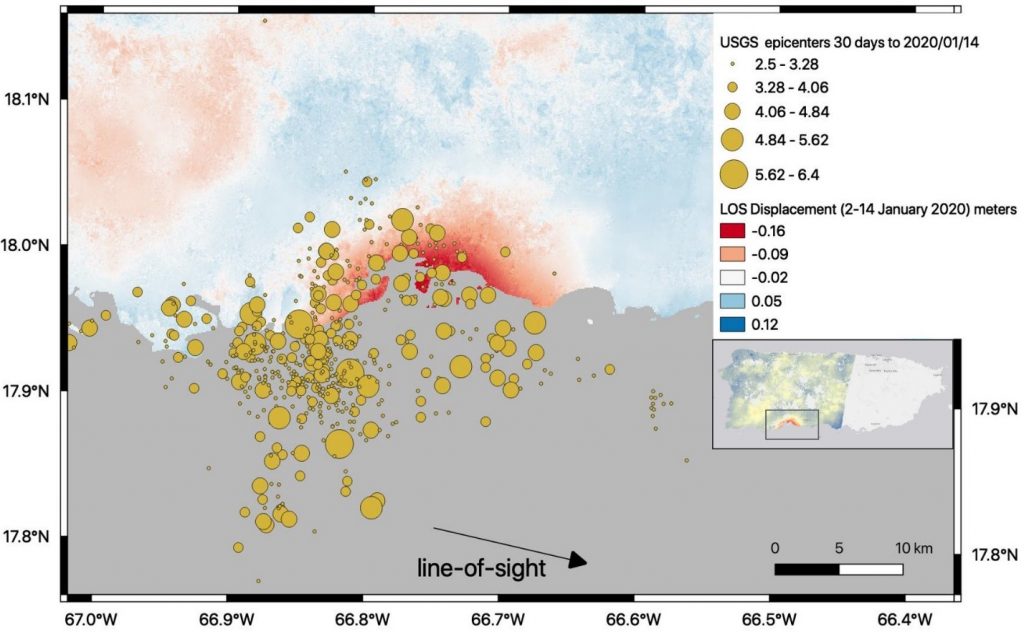 Surface displacement maps highlight the change in elevation caused by the Puerto Rico earthquakes between Jan. 2 and 14. This displacement map from Jan. 14 estimates around 6 inches of surface lowering centered on the Guayanilla Bay in the southern region of Puerto Rico. (Gray area is ocean.) Credit: NASA, JPL-Caltech, ESA

Scientists have conducted preliminary mapping of landslides inferred to have occurred during the period of strong ground shaking related to the Jan. 7 earthquake. One hundred twenty landslides were mapped. They are widely dispersed across the affected area, with the highest concentration in the southwestern portion of the island nearest the epicenter. The landslide team is coordinating directly with the USGS Landslide Hazard program to provide relevant information for site analyses and assessments.

Scientists at the University Space Research Association collaborating with NASA have used satellite data to assess power outage maps. These “Black Marble” maps are being provided to FEMA Region II’s Geospatial Resource Center by USRA’s Earth from Space Institute and are being used to inform response efforts on the ground. 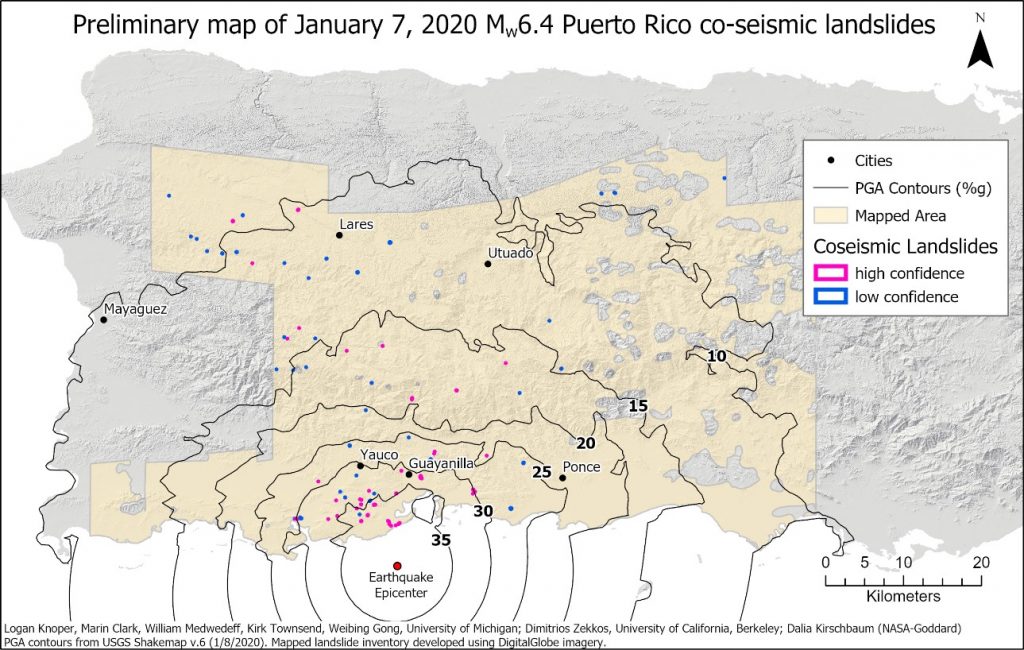 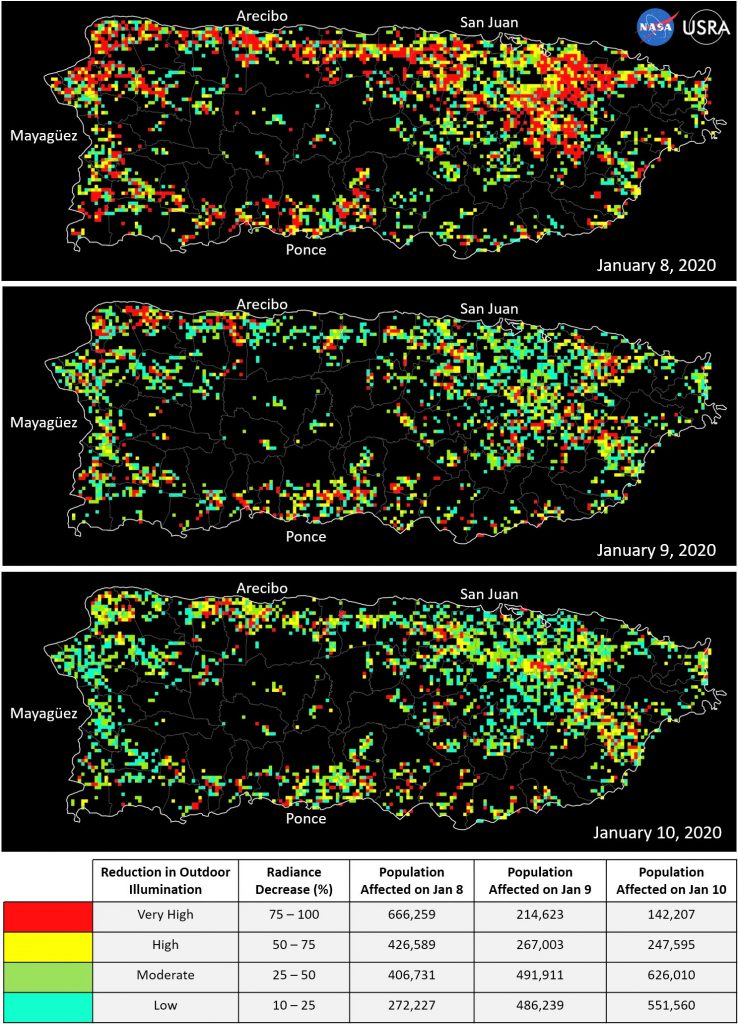 Preliminary assessment of outdoor illumination conditions before and after the Jan. 7 earthquake are shown in this series of maps. The Jan. 8 map tracks the initial outages after the earthquake. The Jan. 9 and 10 maps show some recovery, particularly in densely populated areas of San Juan, Ponce, and Arecibo. Credit: Universities Space Research Association