With our newest module, Rocket Science, we are using a new video delivery tool. NASA’s Video Gallery now houses the videos. Instead of downloading a Zip file, you can download one video at a reduced file size. Reduced file sizes mean faster downloads and less bandwidth and storage space usage. This capability is perfect if your school has limited space for files.

Another cool thing about the videos in the Gallery is that you can watch them on devices that do not use Flash players. So iPad and iPhone users can watch these videos now. Use a downloader app to put files on your device and a video editing app to build podcast episodes. You also can share them via a variety of social media. 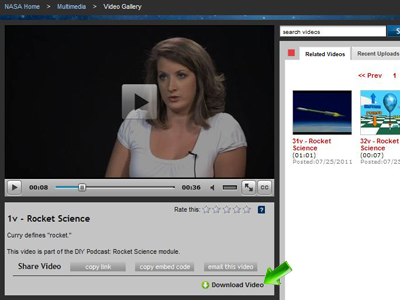 Here’s a tip for downloading: On some browsers, you need to right click the “Download Video” button to be able to name the files as you like.

Windows XP and Vista users with MovieMaker should note that the videos download as mp4 files. You need to use a video converter to change the files from mp4 to .wmv files. Search the Web for a free converter. Be sure to read reviews to find the best.

I hope this new video format opens up new ideas and possibilities of how you can use DIY Podcast videos.

When I first learned we were to create a module about failure, I was concerned: Does NASA really want to talk about failure? How can teachers use “failure” in their studies?

As I researched the topic, I realized that failure is not always as devastating as it sounds. Failure is a lesson learned. And you know the cliché: You don’t fail until you quit.

Failure is not the end; it’s part of the process. That’s what we want students to recognize as they create podcasts or multimedia projects using the new DIY Podcast module, Failure Prevention. 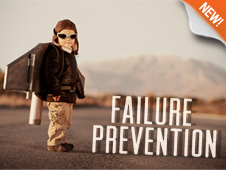 Because NASA’s goal is success, studying “failure” is a big part of what we do — we want to prevent failure. NASA scientists and engineers plan and test to the extremes. They know that a piece of hardware that survives in extreme conditions will succeed under normal working conditions.

So where can you apply this module to your curriculum? Science and technology classes would be a perfect fit. We will discuss more about the module and educational standards in a future post.

Much of the content of this module explains or shows the ways NASA tests models and prototypes to prevent failure. We have experts Victoria (Torey) Long and Clara Wright of NASA’s Kennedy Space Center. They are materials engineers who analyze failures after they’ve occurred. Besides several sound bites discussing failure prevention and analysis, Long and Wright demonstrate some of the techniques they use for analyzing failure.

Camille Alleyne of NASA’s Johnson Space Center was the deputy manager for the test and verification program for the Orion crew and service module. She too lends her expertise about failure prevention.

One of the exciting parts of the video clips is our selection of historic failures — exploding rockets. We all know that students will enjoy those. We also have links to recent hardware tests that NASA has performed, including dropping a test vehicle into water.

No NASA product about failure would be complete without the audio clip from NASA’s most successful failure — Apollo 13’s, “Houston, we’ve had a problem.” Even though the mission did not land on the moon, NASA gained experience in safely returning the crew to Earth after a malfunction.

I hope you and your students are successful when you build a podcast about preventing failure!

Please Note: If you leave a comment, do not include a link to your blog or other websites. We typically won’t be able to approve your comment if you add a URL.

NASA has educational products to supplement your lessons as you create a multimedia product about recycling.

The Cleaning Water Activity is a lesson in which students build a water filtering system from a 2-liter plastic bottle and then test its efficiency. This lesson is also available in Spanish.

The Environmental Control and Life Support Systems Water Filtration Challenge is an educator guide with background information and activities. The purpose of the guide is for students to learn about the space station ECLSS that purifies waste water. Groups of students build and test water filtration systems made from 0.5-liter water bottles. As a class, students use ideas from the best water filters to create a classroom design.

For more resources, refer to the Waste Limitation Management and Recycling Design Challenge. This guide has background information about the properties of water, the water cycle and the ECLSS. The purpose of the guide is to be a starting point for students to “begin researching and answering the challenging questions of how to maintain human habitations on the moon and other planets in our solar system.”

Students are offered five activities to try different methods of water filtering and purification. The design challenge section has students design and test a complete water recycling system based on the methods they’ve already tested.

Please Note: If you leave a comment, do not include a link to your blog or other websites. We typicallywon’t be able to approve your comment if you add a URL.

“One of astronauts’ favorite things to do is breathe.”

A presenter at a recent Marshall Space Flight Center award ceremony pointed out this fact as he introduced an award recipient who had worked on the International Space Station carbon dioxide removal assembly.

Of course, breathing is important. But so is recycling, especially on the space station. You won’t do the first without the second. 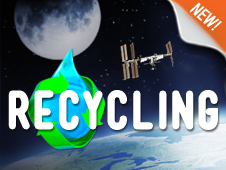 With our newest DIY Podcast module, Recycling, you and your students can use NASA content to create a podcast or other multimedia product with NASA video, audio clips and images to show the importance of recycling in a closed system. Space recycling is not the same as recycling aluminum, paper, plastic, etc., on Earth: Instead, this module is about recycling our most vital needs — air and water.

The module includes sound bites from an interview with NASA microbiologist Monsi Roman (pronounced ro-MAHN). She worked on the Environmental Control and Life Support System for the space station from its inception and was able to see the finished product in use by the station crew. She is currently working on life support systems to sustain a crew on missions beyond Earth’s orbit. Roman explains the purpose of ECLSS, how it was tested and why it’s important.

A couple of sound bites from astronaut Mike Fincke explain how the life support system removes carbon dioxide from the air and what happens to other space trash. We have a few clips from 2009 of the Expedition 19 station crew taking the inaugural drinks of recycled water.

The animation clips in this module illustrate the chemical processes that occur as the ECLSS recycles.

In all, we have 23 video clips, 16 audio clips and 16 images to start you on the road to Recycling.

Please Note: If you leave a comment, do not include a link to your blog or other websites. We typically won’t be able to approve your comment if you add a URL.