A few weeks ago, NASA announced a stunning news-story which became one of the biggest NASA science stories ever: over 3 billion interactions with NASA’s online content, hundreds of newspapers (including New York Times) carried the story on the front-page, tens of thousands of articles were written in the worldwide press, and a Google Doodle topped it all off (https://www.google.com/…/seven-earth-size-exoplanets-discov…).

The story is compelling: Based on NASA Spitzer observations, Trappist-1 is a newly discovered mini-solar system with 7 rocky planets, 3 of which in the habitable zone where water can pool on the surface. This post is about things that happened since, and that shows how exoplanet research is becoming increasingly inter-disciplinary. 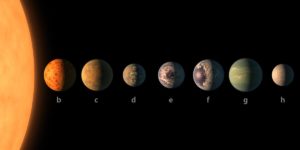 A couple of weeks after the initial announcement, Kepler on its K2 mission provided 74 days of monitoring of the Trappist-1 system and its cosmic neighborhood (https://www.nasa.gov/…/nasas-kepler-provides-another-peek-…/). Within 2.5 hours, the first tweet came out indicating a result: An astronomer had found a second pass of planet H, the outer-most planet. Within weeks, that result was already summarized online as part of the arXiv e-print series (http://adsabs.harvard.edu/abs/2017arXiv170304166L): planet H is at the snow-line, beyond which water can exist only in its frozen state. Many of the other results of the initial paper were also confirmed. Obviously, these results (as well as others mentioned below) will have to go through review before the results are fully accepted.

The data also provided important additional information about the activity of the star. Just like our Sun, Trappist-1 has magnetic activity that leads to flares. In fact, astronomers know that this type of dwarf star tends to have a very violent past when it comes to stellar activity – possibly providing an important ingredient whether or not life can persist on this planet.

One researcher told me that using the data about the magnetic field known from this star, it seems that the field is such that the planets sit in a subsonic part of its stellar wind, and not the super-sonic part as all planets here in the solar system. If this is correct, the Trappist-1 planets have a fundamentally different space weather environment than the Earth with stellar wind coming towards them from all directions, not just from the direction of its star.

There is another result that is important in this context, and this one is from our neighborhood – from MAVEN, currently orbiting Mars. Based on their data of atmospheric loss of specific components, the team concluded that Mars lost most of its atmosphere and its water during its history, making it far less hospitable than the Earth. According to the authors, the culprit for this loss is the absence of a global-scale magnetic field that suppresses such loss to space. Do Trappist-1 planets have magnetic fields? We don’t know at this point.

Finally, a submitted paper by Wolf (https://arxiv.org/abs/1703.05815) does the first analysis of a climate model for the Trappist-1 planets. Needless to say, there are lots of assumption in there, put the paper points out that – under several assumptions – planet E has the best chance to be a habitable world. To me, the paper indicates how many observations about the planets’ atmospheres we need to make to actually nail down some of the very hard questions about the habitability of these strange worlds.

In summary, the Trappist-1 discovery announced a few weeks ago is already spurring research that goes far beyond the initial observations. The follow-up studies give an indication that to answer the fundamental question: “Is there life out there?”, is a fundamental question that will require scientific breakthroughs from many different science fields, including ones who currently are not deeply engaged in this exciting research.

This demonstrates the nature of great research: it’s not just about answering questions that have been asked in the past, it is about asking entirely new questions that will have impact for a long time to come!