It’s not a Hollywood movie, but it could be: The mathematical probabilities align such that an object in the main asteroid belt from the swarm that orbits our Sun intersects with Earth’s orbit, resulting in an asteroid impacting our planet. 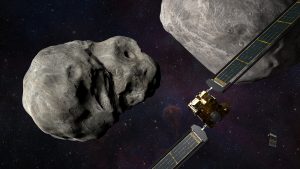 On a small scale this happens all the time—causing the mesmerizing shooting stars we see in our night sky, as these objects disintegrate in Earth’s atmosphere—and of the over one million known asteroids, we know that none are coming anywhere near us for at least 100 years. However, ancient craters in the Southwest United States and elsewhere serve as a reminder of large objects that have hit our planet in the past, and if one were ever to find itself headed our way again, we want to be prepared. Thus, one of NASA’s jobs is to find, track, and monitor these near-Earth objects (NEOs) and, if necessary, protect Earth should one and our planet ever find themselves on a course to be in the same place at the same time.

While it is true that some asteroids could pose a potential impact hazard to Earth, we also study them because they are mysterious relics that have existed and persevered through the solar system’s formation and evolution. They are ancient time capsules that bore witness to the formation of our cosmic neighborhood, and they are pieces of the material that formed the many bodies in our solar system—some of which coalesced into planets and stars, and others that remain orbiting the Sun, flung out as remnants of dust and rock.

Studying near-Earth objects and understanding Earth’s relationship to them is a cornerstone of our science. A sample of asteroid Bennu is currently speeding toward Earth aboard OSIRIS-REx for a Sept. 2023 delivery of what will be one of the most precious 60 grams (or possibly more!) of substance on the planet. Last month, the Lucy mission launched to study eight asteroids—the most ever visited by a single spacecraft—and will visit the Trojan asteroids that swarm Jupiter in front of and behind the gas giant’s orbit far out into our solar system. Next summer we launch Psyche to analyze a unique and metal-rich asteroid by the same name that could be the exposed core of an early planet that lost its rocky outer layers due to a number of violent collisions billions of years ago. And now, we have the Double Asteroid Redirect Test, or DART, which will be humanity’s first test for planetary defense — to see if we could change the course of an asteroid should we ever discover one headed toward Earth. DART is scheduled for launch no earlier than 1:20 a.m. EST Wednesday, Nov. 24 (the day before Thanksgiving on the East Coast; 10:20 p.m. PST Tuesday, Nov. 23), on a SpaceX Falcon 9 rocket from Vandenberg Space Force Base in California. 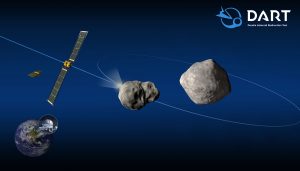 When DART arrives at the Didymos binary asteroid system next fall (currently scheduled to arrive between Sept. 26 and Oct. 1), it will need to differentiate between its impact target Dimorphos and the larger parent asteroid that Dimorphos orbits, Didymos — all while millions of miles away from Earth. It will do this with the help of its single instrument, the Didymos Reconnaissance and Asteroid Camera for Optical navigation (DRACO) camera and a sophisticated suite of algorithms called SMART Nav. Once DART identifies and locks onto Dimorphos, it will kinetically impact the asteroid moonlet at a speed of 15,000 miles per hour—for reference, this means DART will cover its last four miles in one single second—which will change the amount of time it takes Dimorphos to orbit Didymos. This change in time will be measured through an international observation campaign and will be key to proving that asteroid deflection though kinetic impact is possible. 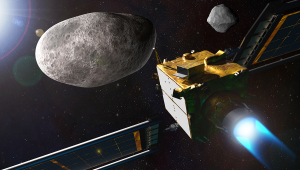 Ten days prior to impact, DART will release the LICIA CubeSat provided by our partners at ASI, the Italian Space Agency, to observe the entire operation from afar and gather further data about DART’s kinetic impact test. ESA, the European Space Agency, will also be watching closely as they look to visit the two asteroids with the HERA mission in 2026 to further examine DART’s impact site.

To be clear: The Didymos system is not a threat to Earth, nor could we nudge it and cause it to come toward Earth. This is simply a test to determine if pushing an asteroid is a repeatable, viable technique we could use in the future. If detected at a far enough distance from Earth, even a minute change that alters an asteroid’s trajectory could make the difference between an asteroid impacting our planet and avoiding it altogether. 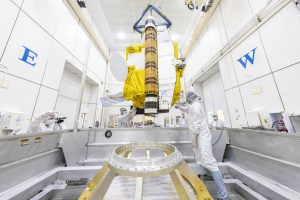 DART is part of a new concept in spacecraft that are much smaller, more focused, and quicker to realize. Our use of CubeSats is another welcome trend that is helping us to conduct great science both near and far from our planet. We look forward to working with our Italian partners to reap all the benefit of our traveling partner LICIACube. The DART satellite also carries innovative roll-out solar arrays, a cutting-edge propulsion system, and navigation that enables it to pinpoint a small object in space and hit it even though it is moving at thousands of miles per hour. No small feat!

Yes, we need to be prepared should we ever be threatened by one of these enormous bodies emerging from the void of space, but we will remain fascinated by asteroids because of all we can learn from them. Our observation efforts are increasing, our study of these amazing relics of ancient history is unfolding their secrets, and the story of asteroids is a growing part of our scientific inquiry.

I hope you will join our planetary defense efforts by signing up to become a Planetary Defender, and by watching the DART launch on Nov. 23 from wherever you live for the start of this next chapter.

We’re exploring the solar system and the universe together – as a NASA Family and an international community who depend on the space agencies and space programs of nations of all sizes around the world to keep us safe and uncover the secrets of the cosmos for the benefit of all.