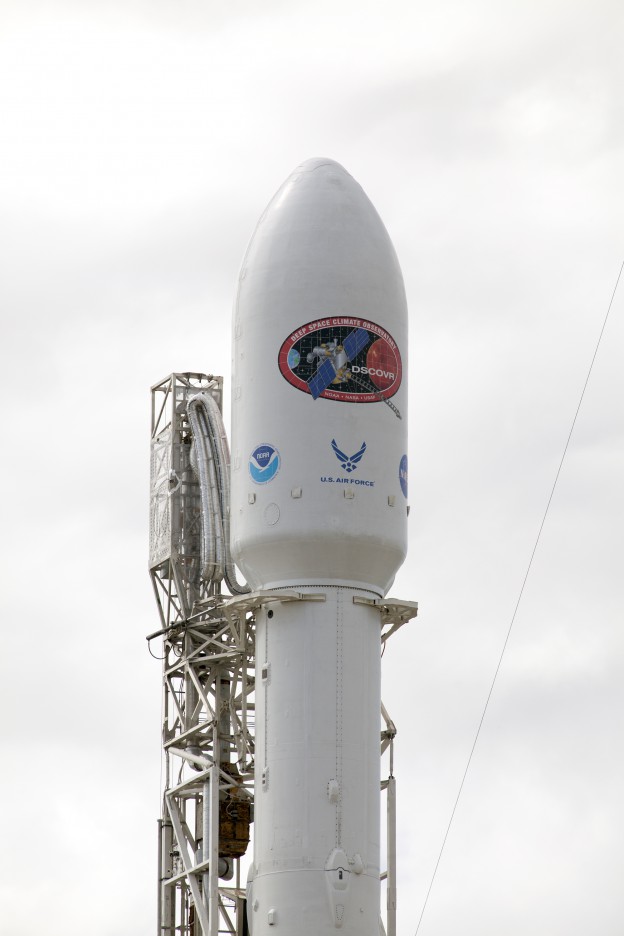 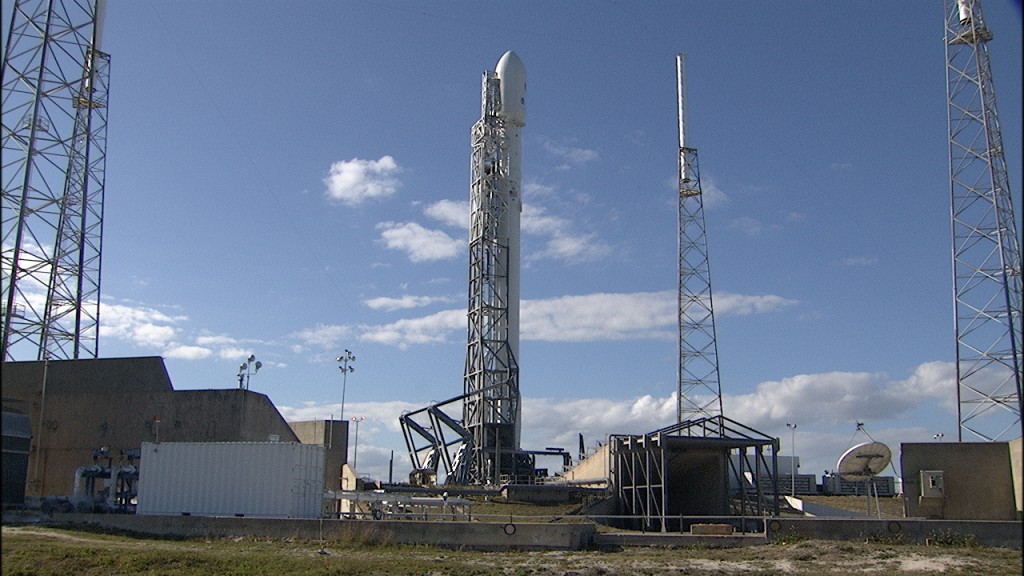 All conditions are go this afternoon as we count down to liftoff of NOAA’s DSCOVR spacecraft at 6:10 p.m. EST from Cape Canaveral Air Force Station in Florida. The Air Force is providing the SpaceX Falcon 9 rocket for today’s launch. DSCOVR is slated to go to a deep space location about a million miles from Earth, or four times farther out than the moon.

The DSCOVR spacecraft will take readings for NOAA that will be used by the Space Weather Prediction Center. You can find out more about the center here or by going to www.spaceweather.gov.

NOAA’s DSCOVR will launch to a place about a million miles away from Earth where the gravity of Earth and the sun is balanced.  The spacecraft will be able to remain in roughly the same place in order to keep a view of the Earth and sun simultaneously. The area is called Lagrange 1, named for Joseph Louis-Lagrange, and it will take DSCOVR 110 days to reach its location. You can read more about Lagrange and the points in space named for him here. 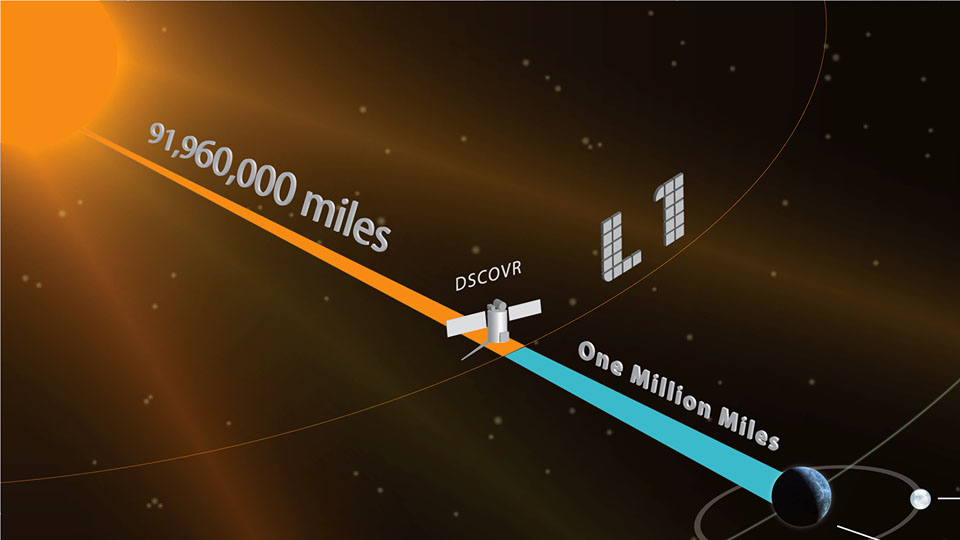 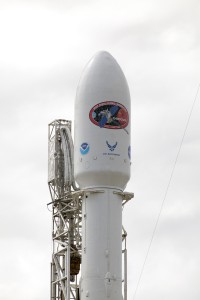 Good afternoon from Florida where NOAA’s newest spacecraft stands ready for liftoff at 6:10 p.m. EST. The spacecraft, called DSCOVR, will be sent to an orbit 1 million miles away from the Earth where it will be able to watch the Sun and Earth at the same time. A SpaceX Falcon 9 is being fueled at Space Launch Complex 40 at Cape Canaveral Air Force Station.

We will update countdown milestones this afternoon and follow DSCOVR’s ascent into space. We’ll also offer details about DSCOVR’s mission, which is the first deep space mission for the National Oceanic and Atmospheric Administration.

Managers of the SpaceX Falcon 9 rocket and the DSCOVR spacecraft have given a “go” to load propellants aboard the two-stage Falcon.

Weather remains 90 percent “go” and there are no technical issues that would prevent the launch of DSCOVR at 6:10:12 p.m. EST from Cape Canaveral Air Force Station Space Launch Complex 40 in Florida.

Our continuous countdown coverage to the launch of NOAA’s DSCOVR mission will begin at 3:30 p.m. EST leading up to liftoff at 6:10 p.m. The weather is looking very good for this evening’s liftoff, too, and forecasters continue to offer a 90 percent chance of acceptable conditions at launch time. The launch window is instantaneous for DSCOVR. Should it be necessary to attempt launch Monday, the forecast calls for a 40 percent chance of favorable weather.

Our launch coverage will include details of NOAA’s goals for the spacecraft and what it means for studying Earth right now. You can also watch NASA TV for full countdown and launch commentary at www.nasa.gov/ntv or just click this link.

There is a 90 percent chance of favorable weather for launch of DSCOVR, NOAA’s new deep space satellite to monitor space weather. DSCOVR is a partnership between NOAA, NASA and the U.S. Air Force. The spacecraft is targeted for launch atop a SpaceX Falcon 9 rocket at 6:10:12 p.m. EST on Sunday, Feb. 8, from Cape Canaveral Air Force Station Space Launch Complex 40 in Florida.

NASA TV will provide live coverage of a news briefing on the DSCOVR mission, NOAA’s new satellite to monitor space weather, at 1 p.m. EST Saturday, Feb. 7 from the Press Site at Kennedy Space Center in Florida. The briefing also will stream live on the agency’s website here. NASA TV’s and the DSCOVR launch blog coverage of countdown and liftoff will begin at 3:30 p.m. Sunday.

Reporters not at Kennedy may ask questions via phone by contacting the Kennedy newsroom at 321-867-2468 no later than 12:30 p.m. Saturday. Questions also can be submitted via social media using #askDSCOVR.

Participants in the prelaunch news conference are:

DSCOVR is a partnership between NOAA, NASA and the U.S. Air Force. DSCOVR will maintain the nation’s solar wind observations, which are critical to the accuracy and lead time of NOAA’s space weather alerts, forecasts, and warnings. Space weather events like geomagnetic storms, caused by changes in solar wind, can affect public infrastructure systems such as power grids, telecommunications systems, and aircraft avionics.  DSCOVR will succeed NASA’s Advanced Composition Explorer in supporting solar observations and provide 15- to 60-minute warning time to improve predictions of geomagnetic storm impact locations.

Weather forecasters from the U.S. Air Force 45th Weather Squadron are predicting a 90 percent chance of favorable weather for launch of DSCOVR, the new NOAA satellite to monitor space weather. The primary concern is for thick clouds at launch time.

DSCOVR is a partnership between NOAA, NASA and the U.S. Air Force. The spacecraft is targeted for launch atop a SpaceX Falcon 9 rocket at 6:10:12 p.m. EST on Sunday, Feb. 8, from Space Launch Complex 40 at Cape Canaveral Air Force Station  in Florida.

NOAA’s Satellite and Information Service has posted this press kit for that agency’s DSCOVR mission due to launch Sunday at 6:10 p.m. from Cape Canaveral Air Force Station in Florida adjacent to NASA’s Kennedy Space Center. A SpaceX Falcon 9 will be used to lift the spacecraft to the L1 point in space a million miles away from Earth where DSCOVR will observe the sun and Earth simultaneously. The press kit includes quick facts about DSCOVR as well as links to other information about the mission. http://www.nesdis.noaa.gov/DSCOVR/press.html