Since the 1960s, scientists from NASA and NOAA, using a combination of satellite, aircraft and balloon measurements, have worked together to study the ozone layer, which acts like a sunscreen for Earth, blocking harmful ultraviolet rays emitted by the Sun.

In 1985, scientists reported a hole forming in the ozone layer over Antarctica. The culprit?  Chlorofluorocarbons (CFCs), commonly used as a propellant and refrigerant, were reacting with and depleting ozone molecules in the presence of ultraviolet light.

In response to the discovery, in 1987 nations of the world agreed to the landmark Montreal Protocol on Substances that Deplete the Ozone Layer. The Protocol limited the release of ozone-depleting CFCs into the atmosphere. Since then, the ozone hole has shown signs of healing, as NASA and NOAA have observed a decrease of CFCs in the atmosphere. 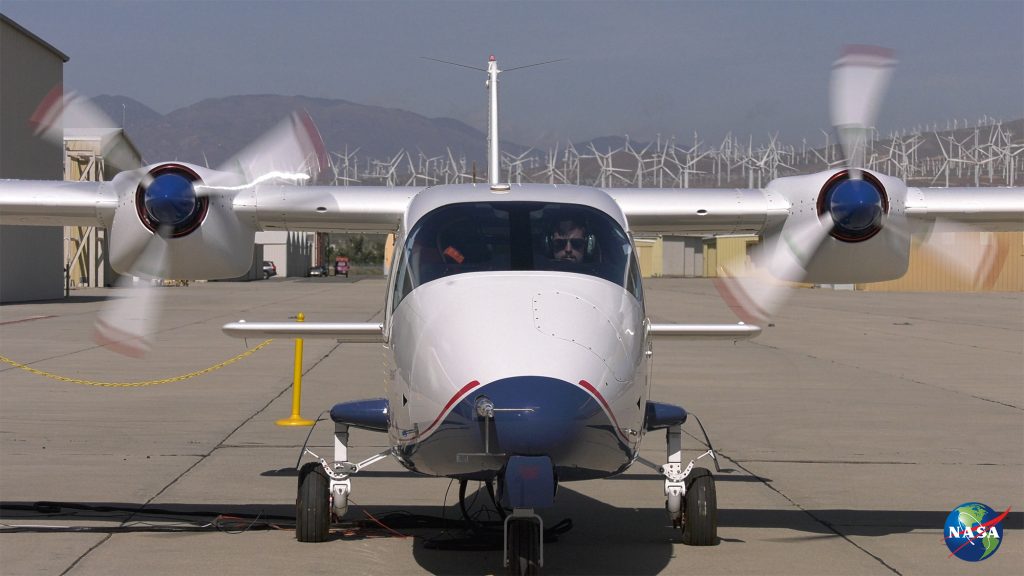 NASA’s X-57 “Maxwell” is the agency’s first all-electric experimental aircraft, or X-plane, and its first crewed X-plane in two decades.

Electric propulsion has the potential to make planes quieter, more efficient and more environmentally friendly, and Maxwell’s design driver includes zero carbon emissions in flight. Electric propulsion provides not only a five to ten times reduction in greenhouse gas emissions but also a technology path for aircraft to eliminate 100 low lead aviation gasoline, which is the leading contributor to lead environmental emissions. Additionally, the X-57 will include 14 battery-powered motors that will run off renewable electricity, making clear the environmental and economic advantages.

The primary goal of the X-57 project is to share the aircraft’s electric propulsion-focused design and airworthiness process with regulators in order to advance certification approaches for distributed electric propulsion in emerging electric aircraft markets. 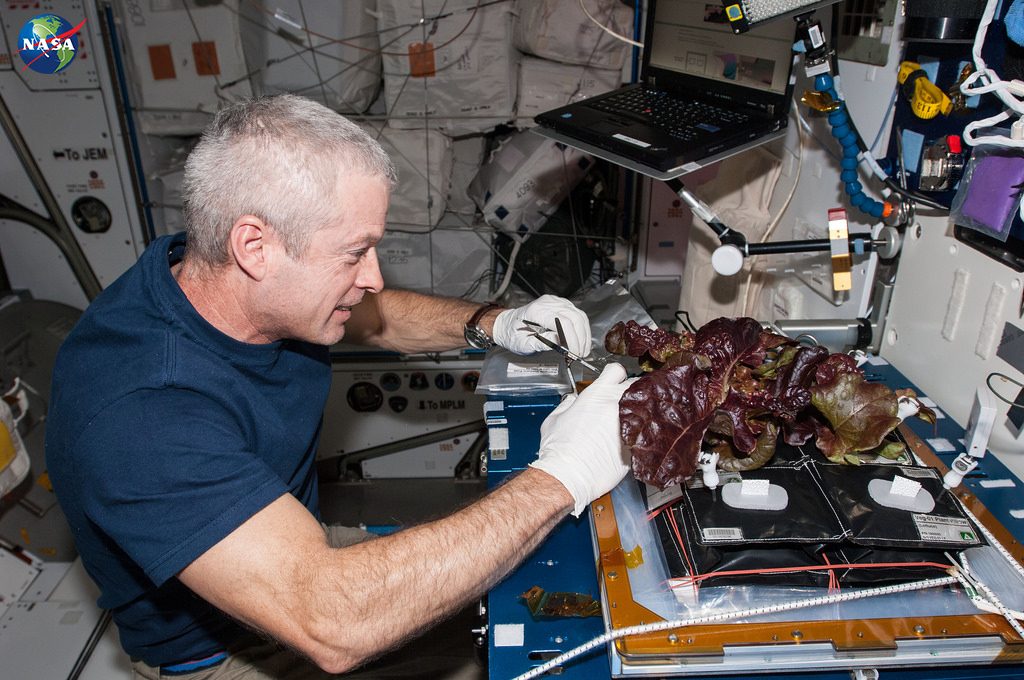 Do you have a green thumb? Growing plants can be tricky whether you’re on a spaceship or Earth. Farmers around the globe rely on tools and technologies that have roots at NASA. Over the years, companies large and small have partnered with us on specialized fertilizers, self-driving tractors and more.

Many of the agriculture technologies help farmers understand crop growth throughout the season and predict final crop yields with that data. Based on a NASA model, commercial software predicts corn production for farmers, ethanol producers and grain traders. It provides daily updates on the state of corn vegetation, incorporating nearly 30 variables including NASA satellite data. In many cases, these NASA-influenced farming technologies allow farmers to use water and other resources more efficiently. 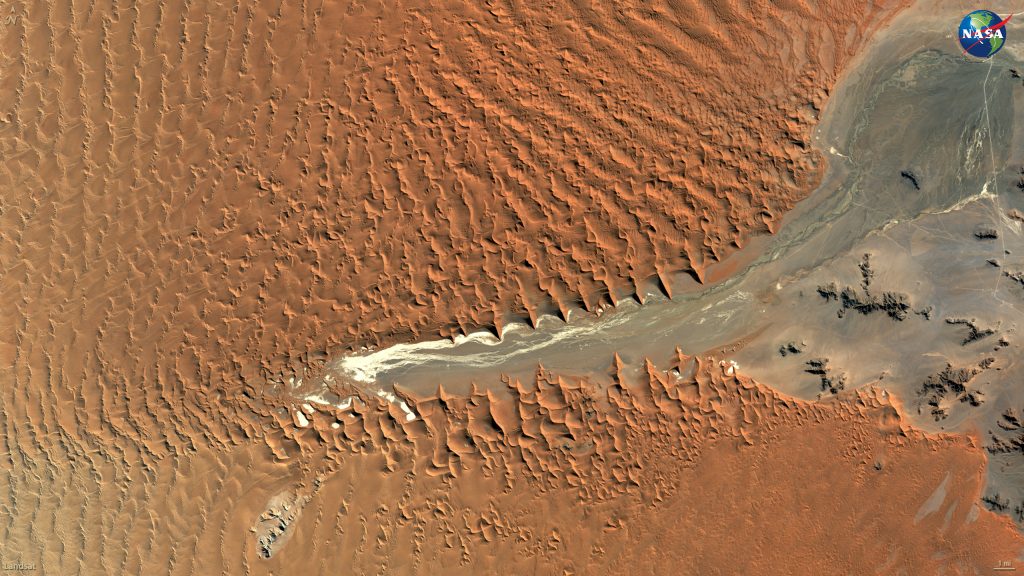 Since the launch of the first Landsat satellite in 1972, the joint NASA/USGS mission has gathered and archived more than 8 million images of Earth – including the one above of Namibia’s Namib-Naukluft National Park. These data-rich images are free and publicly available, allowing scientists to study how people and nature are changing the planet, and helping resource managers make better informed decisions. 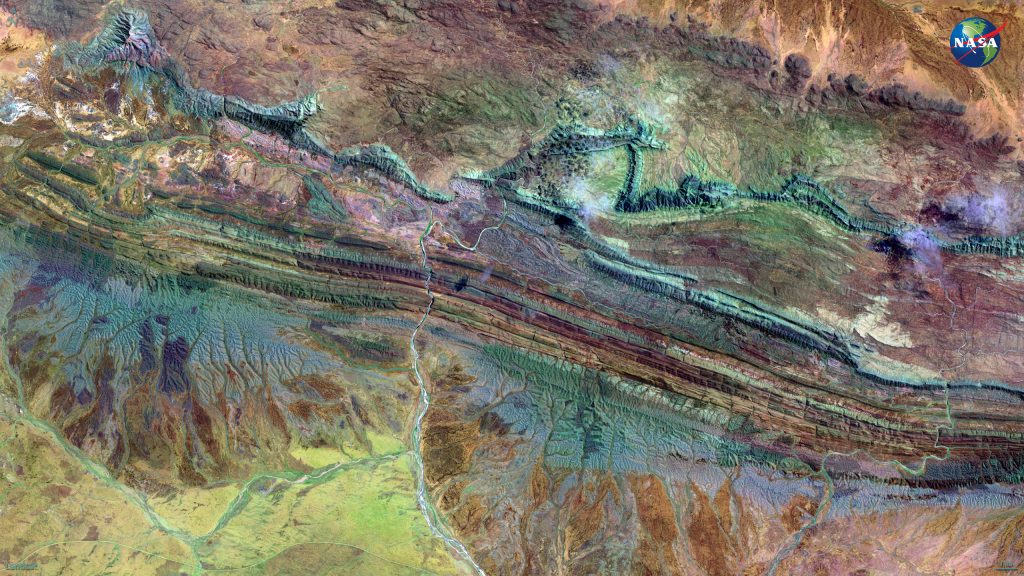 Landsat satellites detect wavelengths of light that are both visible and invisible to us. A false color image is one that uses a visible color to stand for in the signal from an invisible wavelength, such as this scene at the MacDonnell Ranges of Australia, which is a composite of visible, near-infrared and short-wave infrared wavelengths. 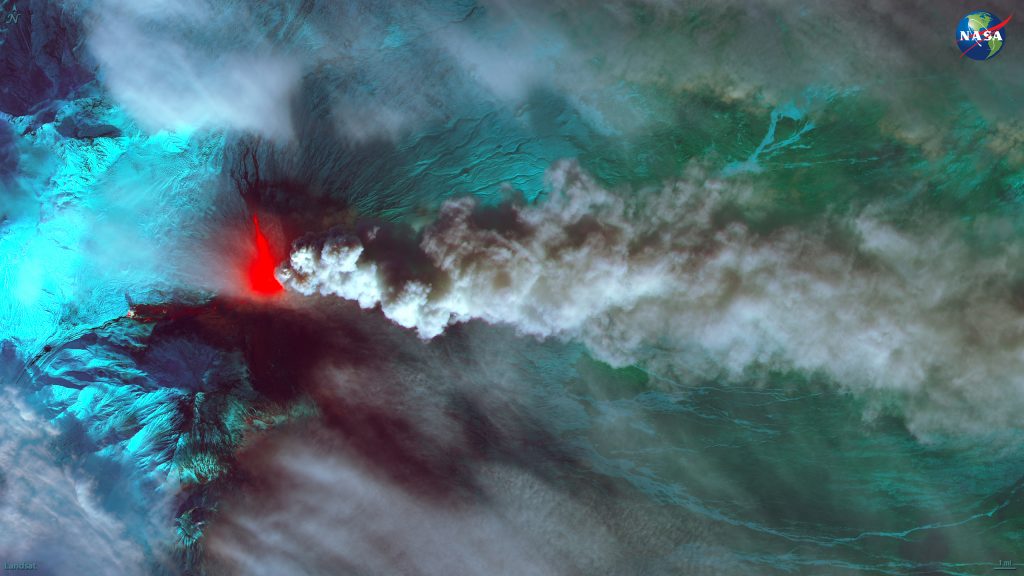 Erupting volcanoes glow in false-color images, including as this one of Klyuchevskaya in Russia, where the heat from lava flows stand from the ash and clouds. 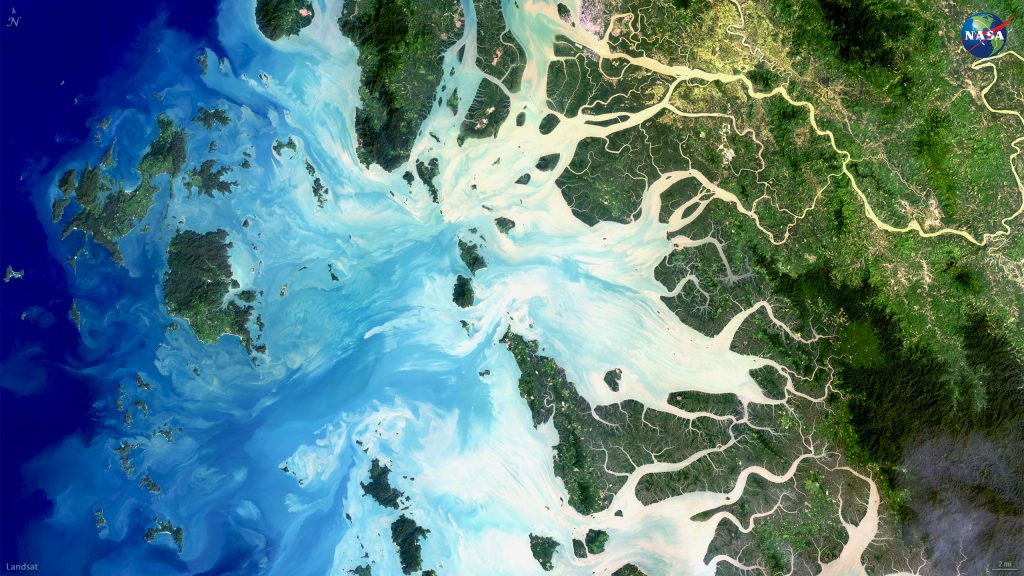 Natural color images can reveal details of Earth’s surface as well: the sediment-heavy rivers along the coast of Myanmar look white as they swirl into the deeper shades of blue of the Andaman Sea in the image above.

Algae might be small, but when they grow out of control, forming harmful algal blooms (HABs), they can cause big problems. Ecosystems and human health can be affected as thick layers of smelly foam form on beaches, toxins potentially enter the food chain, or aquatic oxygen levels become depleted.

Detecting HABs can present a challenge due to the complexity of the coastal environment. Conventional algorithms detect a green pigment in algae but cannot discriminate between an actual bloom and other, similar features in water.

Now, scientists have developed a way to detect HABs early on by using images of Earth from space. Images from the Hyperspectral Imager for the Coastal Ocean (HICO), a remote sensing instrument that operated from 2009 to 2014 from the International Space Station, were used to develop an algorithm that monitors algae by detecting chlorophyll fluorescence. Since the space station covers about 80% of Earth’s surface, including most coastal regions where HABs are a major threat, it helped to provide the ideal data for developing a new algae bloom detection system.

This detection system could allow coastal businesses to minimize the economic hit from an HAB by preparing for a bloom before it reaches the shore.

NASA’s Kennedy Space Center in Florida shares its boundaries with the Merritt Island National Wildlife Refuge. Within its approximately 140,000 acres, space facilities and technology co-exist with more than 1,500 species of plants and wildlife, including more than 61 federal- and state-listed endangered and threatened animal and plant species. Kennedy is responsible for more protected species than any other federal property in the continental United States.

Top priorities focus on monitoring ecosystem dynamics and sharing this vital information with regional stakeholders. For example, the team tracks habitat quality and populations of native species such as the Florida scrub-jay, West Indian manatee, bald eagle and many more.

The top objective is to assure NASA’s mission in space while monitoring and minimizing impacts to its local ecosystem. It’s an obligation the spaceport takes seriously: here, every day is Earth Day.

Condense 48 years into six seconds, and Alaska’s glaciers move at a pace that’s anything but glacial. The rivers of ice flow and surge and shift and retreat, and time-lapse videos created from decades of satellite images track the changes over time.

The videos can help researchers study how glaciers behave over time, which in turn lets them forecast what will happen in a warming climate. Mark Fahnestock, a glaciologist at the University of Alaska Fairbanks, created these time-lapse videos for each glacier in Alaska and the Yukon, using images from the NASA/USGS Landsat satellites. He painstakingly searched for one cloud-free, late-summer satellite image for each year, going back to 1972 when the first Landsat satellite launched (Landsat 9 is slated to launch in 2021).

“When you play these movies,” Fahnestock said, “you get a sense of how dynamic these systems are and how unsteady the ice flow is.” 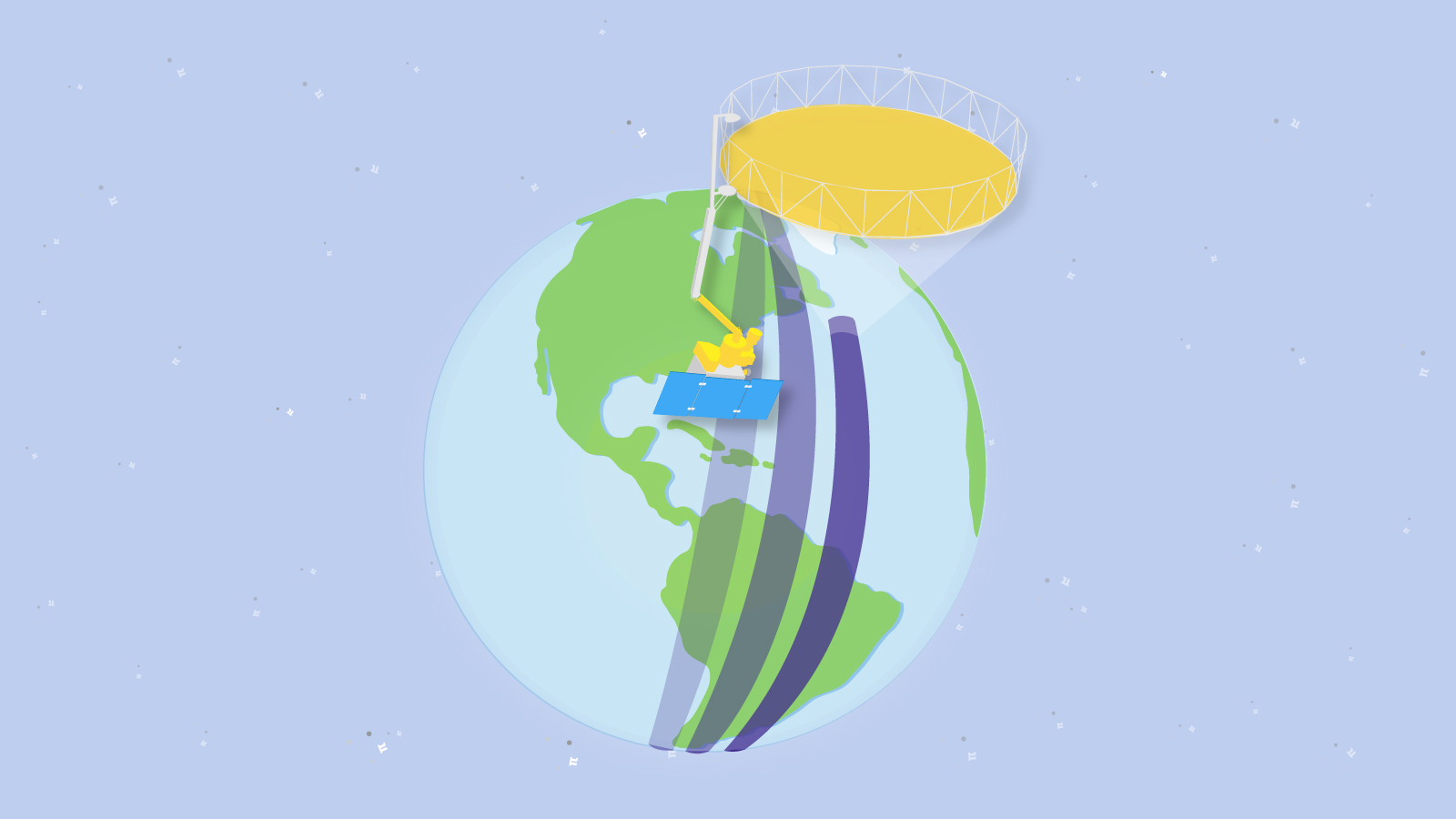 Those are the first 43 digits of pi, an irrational number that plays a huge role in science and math here at NASA and everywhere else in the world. Today, March 14, scientists, mathematicians and students around the planet celebrate Pi Day, an unofficial holiday marking that the month and day are the first three digits of pi: 3.14.

It’s the ratio of a circle’s circumference—the length of its edge—to its diameter, which is the distance from one side of the circle to the other at its widest point.

Why do we care about pi for Earth science?

One big reason: Earth is round! When we’re calculating orbital paths of spacecraft and determining how many orbits it takes to image the entire planet, we use pi!

The Space Station orbits Earth fast – about once every 90 minutes – so each look out the window shows an entirely different view of our home planet. While we can use astronauts’ photos of Earth to do science, the astronauts get to experience a phenomenon called the “overview effect.” Essentially, seeing our home planet from a distance changes your perspective of Earth and its place in the universe.

Astronaut Don Pettit reflected on his first view of Earth from space, stating, “We were somewhere over the ocean and it was an intensity of color that no photography, no video, no movie, no film can capture.”

Sharing images of our planet from space helps reminds us all of how small and fragile Earth is – a pale, blue dot in the vast cosmos.

Because it costs thousands of dollars to send every pound of water sent to space, NASA works hard to recycle every drop it can. On the International Space Station, wastewater, sweat and even urine are recycled and reused. NASA engineers work with private companies to create better systems for clean, drinkable water for astronauts in space. Commercial versions of these systems that quickly and affordably cleanse any readily available water are benefiting people on Earth who live in remote or developing areas where water is scarce or contaminated.

Future long-duration missions to the Moon and Mars will likely harvest, filter and purify water from sub-surface ice. NASA space technologies we develop to do all of this will likely find applications on our planet too.