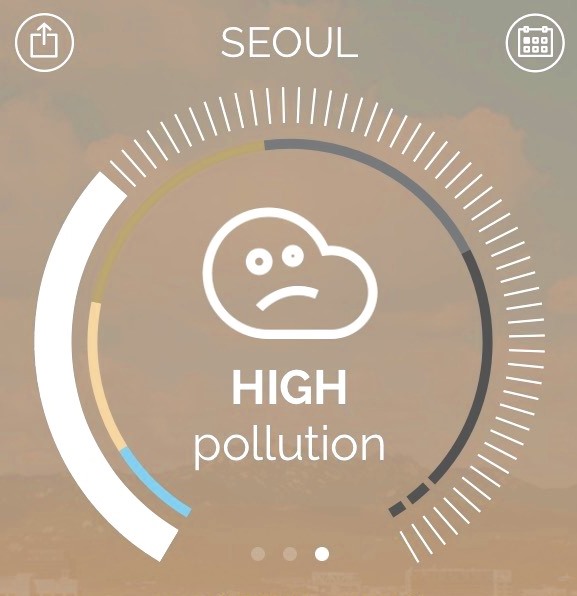 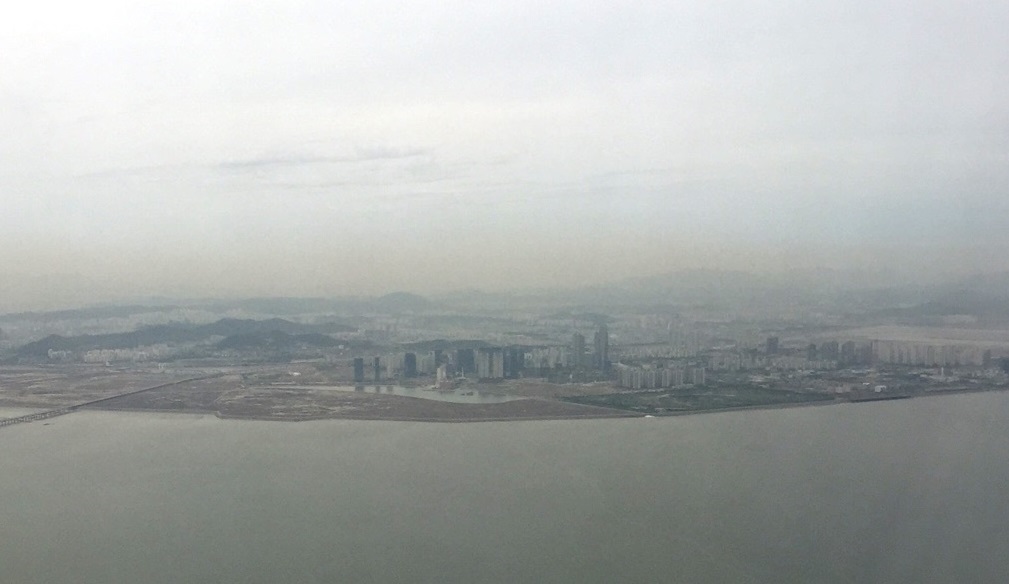 Looking out the window while descending toward Incheon International Airport near Seoul, earlier this week, I couldn’t help but notice the hazy, yellowish brown layer covering the city. For several days before the flight, I had been using various apps, websites and Twitter feeds to track air quality in the megacity. Now there it was, that layer of smog, at the end of a long transpacific flight.

Understanding air pollution in South Korea was the reason that I and over 100 scientists, engineers, pilots, students, and other NASA personnel were flying from around the world to Seoul this week. Our mission: the Korean US Air Quality Study (KORUS-AQ), a collaboration between NASA (where I work) and the Korean National Institute for Environmental Research (NIER).

But why is NASA studying air pollution in South Korea?

The KORUS-AQ team gathers for the first time inside Hangar 1187 at Osan Air Base in South Korea on April 28. (Credit: NASA/Jane Peterson)

Particle pollution is made up of small particles and liquid droplets suspended in the air. These airborne particles can form in a variety of ways. They include smoke from fires and dust as well as particles formed by emissions from cars, power plants and other industrial activities. Breathing in these small particles allows them to enter the lungs where they can cause damage, including health effects such as heart and lung disease and even lead to premature death.

Ozone gas is another big air quality concern. While ozone gas located high in the stratosphere protects us from the sun’s harmful UV rays, pollution from cars and other human emissions near ground level can cause chemical reactions that lead to ozone formation near the surface. Breathing in high levels of ozone is also bad for human health, causing lung diseases and health impacts on sensitive populations such as children, the elderly and people with asthma. Peak ozone in Korea occurs between April and June.

Since Seoul is located on a peninsula, the metropolitan area and the pollution produced here are separated from other sources of emissions. In addition, Seoul’s human-produced emissions are concentrated in its urban areas but are surrounded by more rural agricultural areas. The contrast between urban and rural zones on the peninsula allow scientists to study and differentiate human and naturally-produced emissions and better understand how they interact chemically.  Understanding the chemical reactions between urban and agricultural emissions is critical extremely important for improving models that forecast air quality.

In addition to locally-produced pollution, Seoul is downwind of pollution blowing into the country from far away. Megacity pollution, smoke from seasonal fires, and desert dust all blow onto the Korean Peninsula from other parts of East Asia. KORUS-AQ research aircraft will fly routes off the west coast of South Korea, over South Korea, and off the east coast to sample air moving to and from the Korean Peninsula.  Data collected along these flight paths will allow scientists to better understand how local and distant pollution interacts chemically over the Korean peninsula. April-June is the period of strongest influence from upwind pollution sources blown into the country, including dust outbreaks and biomass burning.

Despite regulatory efforts aimed at curbing emissions over the past ten years, Seoul frequently experiences poor air quality from both ozone and particulate matter. Air quality in Seoul can be so bad at times that residents are urged to avoid exercising outdoors, wear masks when outdoors, or even avoid going outside entirely during extremely bad air quality days.

The colorful lights on the top of N Seoul Tower – the highest point in the city   alert Seoul residents to the amount of fine particle pollution in the air they are breathing. At a certain time of day, if the lights on the tower are blue it means Seoul is experiencing good air quality (less than 45 micrograms of fine dust per cubic meter of air) indicating to residents that it is safe to walk, play, or exercise outdoors. The air quality information is tweeted automatically every hour by @yellowdust. 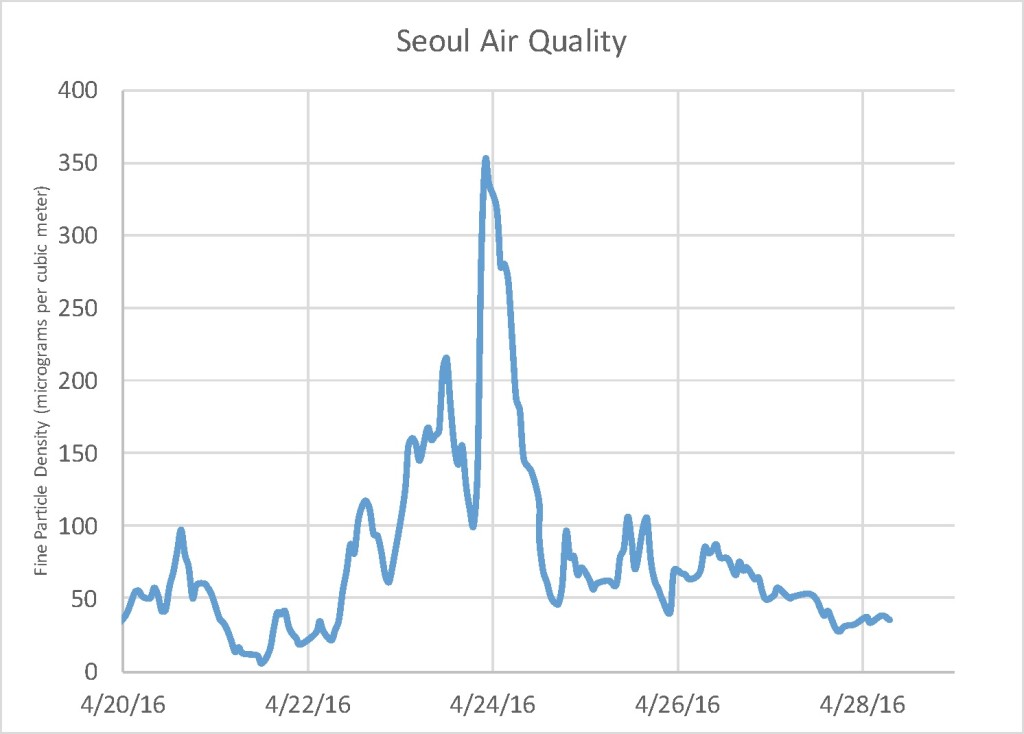 Taking both ozone and particulate matter into account, the Plume Labs app (below) shows that Seoul is currently experiencing some of its worst air quality of the year so far. It is no accident that NASA is here in South Korea now to experience it. The KORUS-AQ mission planners specifically picked this time of year so that the instruments on our airplanes could measure Seoul air quality at its worst. In the future, this information will be used to help address air quality problems here and around the world. 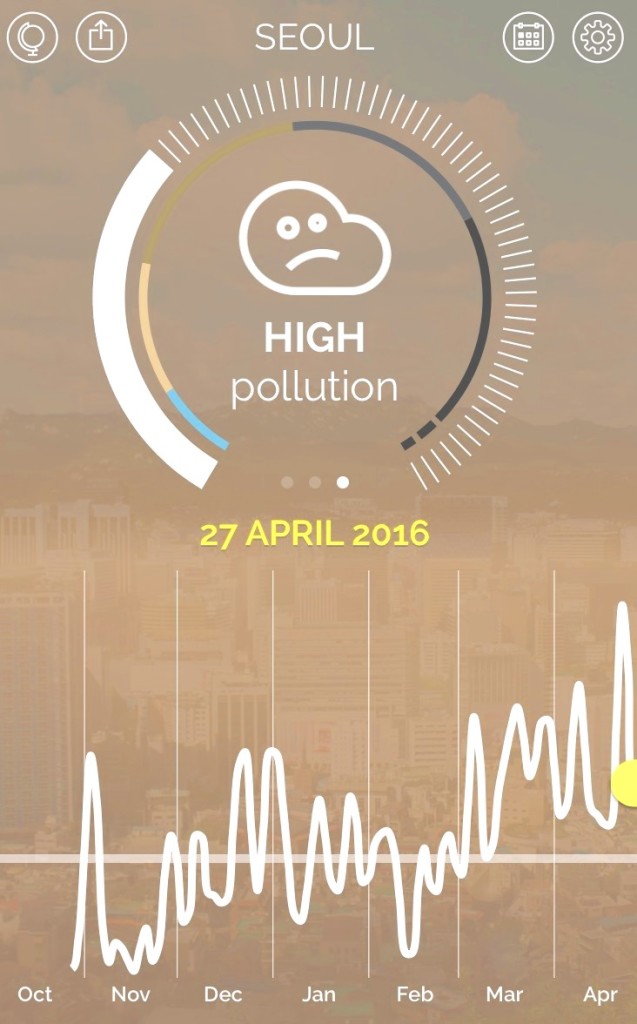