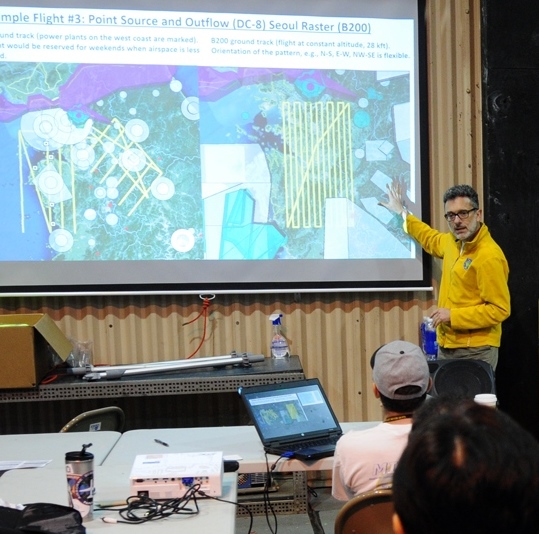 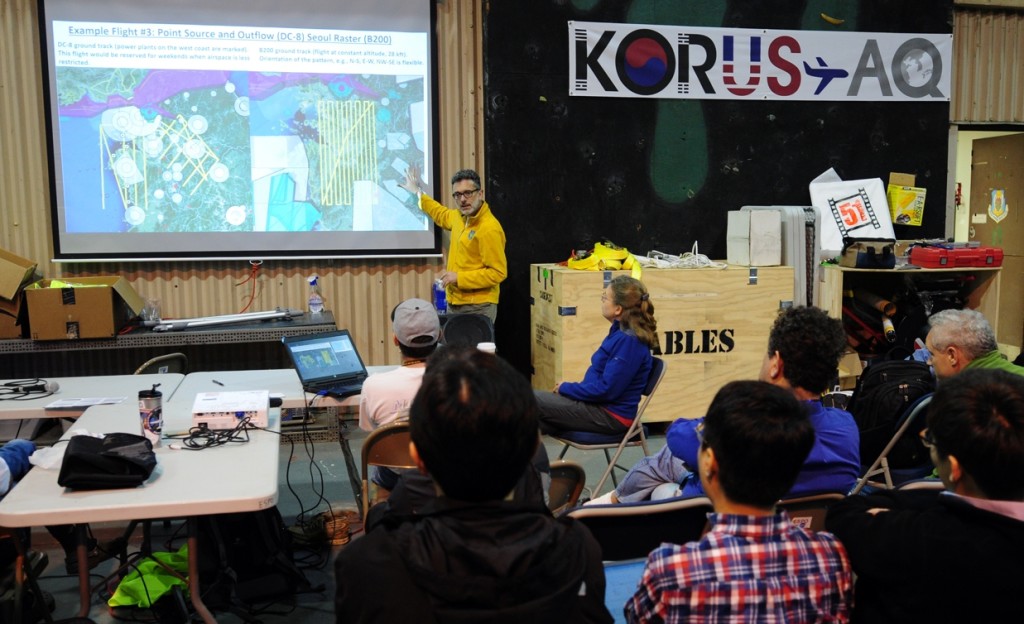 Jay Al-Saadi of NASA’s Langley Research Center discusses preliminary plans for the NASA DC-8 and B-200 during a forecasting meeting. Credit: NASA/Jane Peterson

The science equipment is unloaded and jetlag has subsided for the KORUS-AQ team here getting settled in at Osan Air Base. Now the task at hand is to plan where and when the team’s three aircraft will begin gathering actual observations in the air.

Pollution forecasting, air space restrictions, and weather predictions are all major factors that determine conditions for KORUS-AQ science flights that are targeting a range of air quality conditions over and around South Korea.  To further complicate matters, these conditions change constantly. Determining the best of all three conditions requires careful coordination. This coordination happens through daily morning meetings by flight planners, forecasters, and science instrument teams inside a hangar at Osan that serves as the KORUS-AQ’s headquarters. 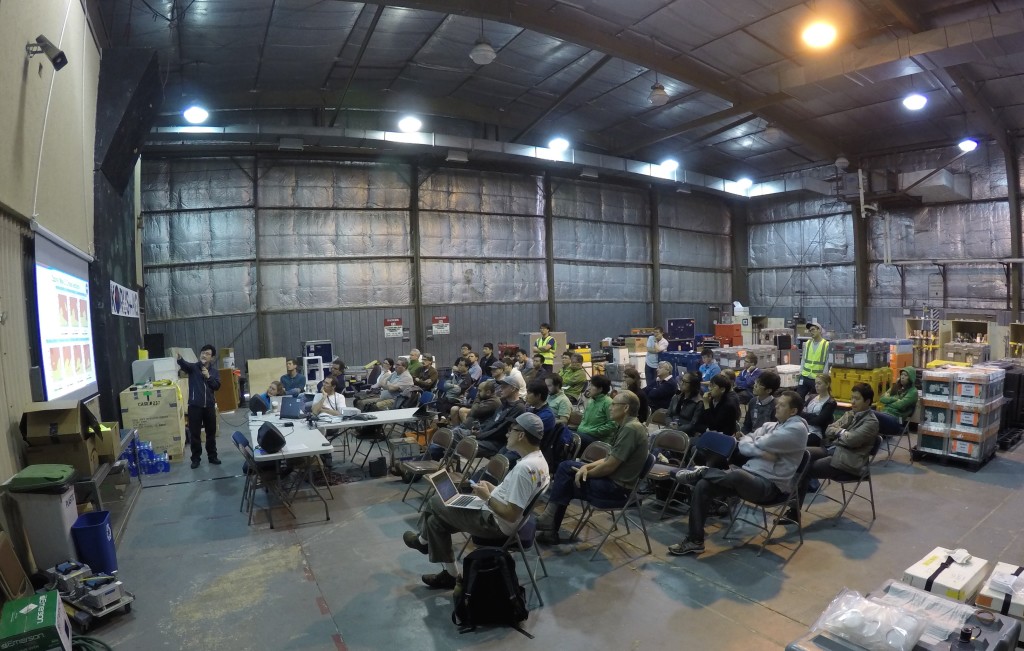 I attended the first of these meetings on Saturday morning April 30 where the team reviewed the conditions for the first proposed flight on Monday, May 2. The question: would those conditions accommodate the science objectives of KORUS-AQ? 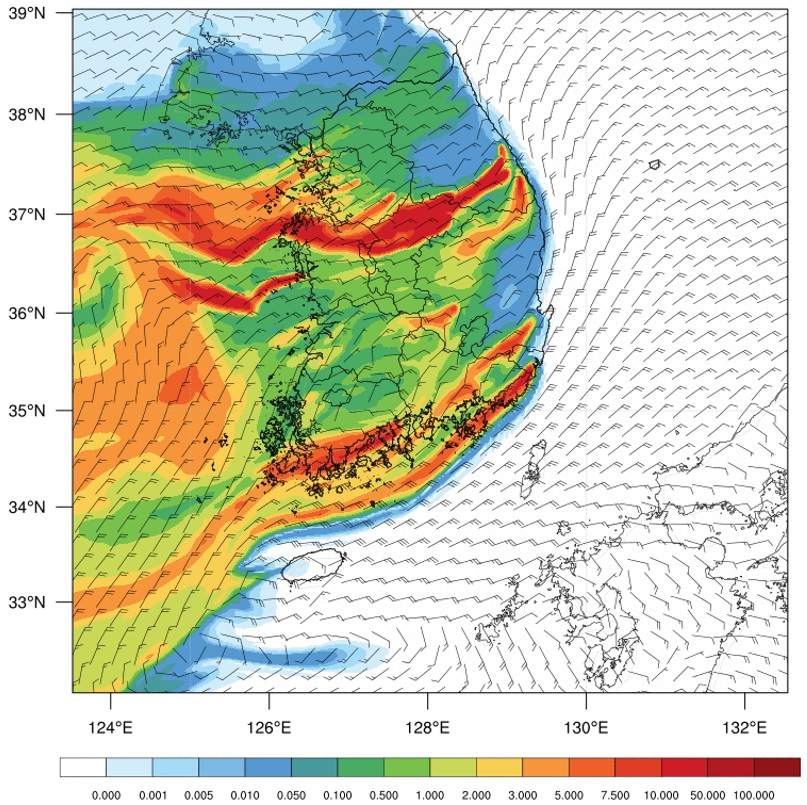 Model run showing surface NO2 from point sources in Korea. KORUS-AQ observations in combination with these models will lead to better understanding of the factors controlling air quality. Credit: NCAR/Louisa Emmons

Another major requirement of the mission was negotiating with South Korea’s air traffic control authority on designing flights that collect the type of data the scientists need. The aircraft will be flying less than conventional patterns over the South Korean peninsula. For example, the DC-8 will fly spiral patterns over specific ground sites and may fly as low as 1000 ft. above ground level to obtain measurement profiles from different altitudes. 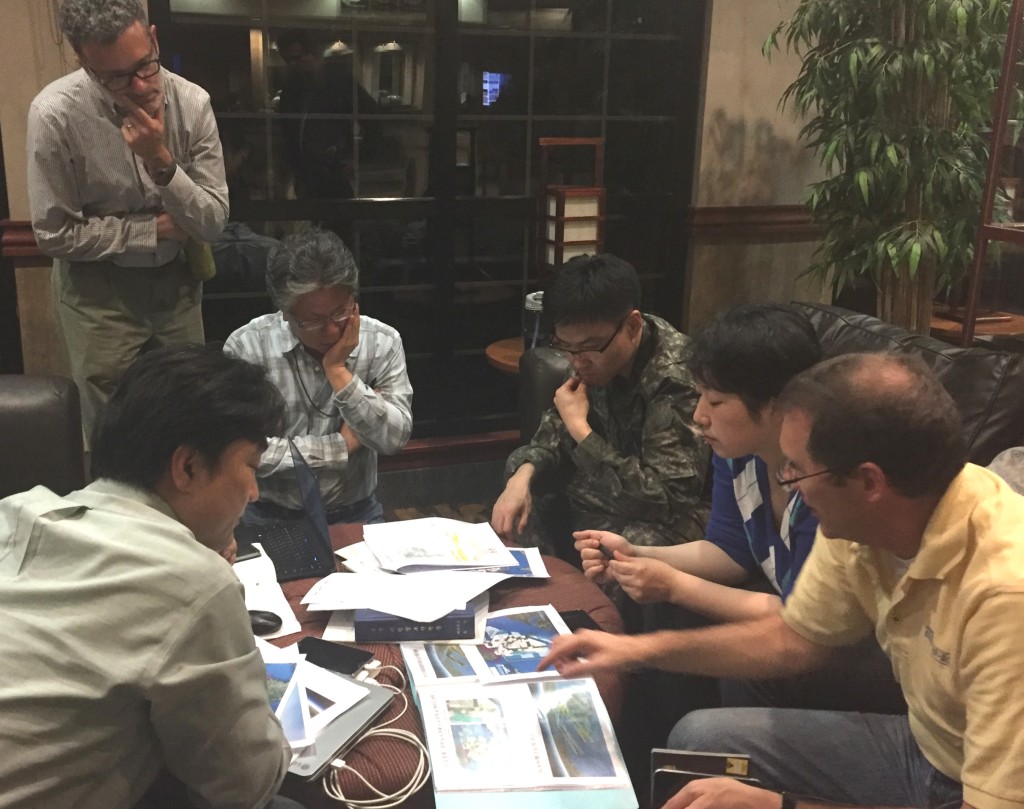 Flight planning discussions took place in some unconventional places and times. Here the KORUS-AQ science team meets after hours in the lobby of the Turumi Lodge at Osan Air Base to work out flight plans to submit to the air traffic control authority. Credit: NASA/Kate Squires

As complex as the planning sounds, the team knows how to work together to achieve progress.

“A lot of preparation goes into our daily flight planning meetings. We hold them on the hangar floor so that all of the science team members can participate. Team members scattered across the many  ground sites in South Korea join these meetings online  This ensures that we have access to all considerations that might influence our flight decisions,” said Jim Crawford, lead U.S. scientist for KORUS-AQ.

The weather forecast shows an impending rainstorm early in the week, which could hamper flight efforts. But the team makes the  decision to fly Monday despite the storm.

“While the conditions Monday are not ideal, these first flights will be difficult to coordinate. Better to give the pilots and scientists a chance to work through and identify difficulties and establish confidence with air traffic control on a marginal day so that we are ready to take advantage of the better sampling days ahead of us,” Crawford said.