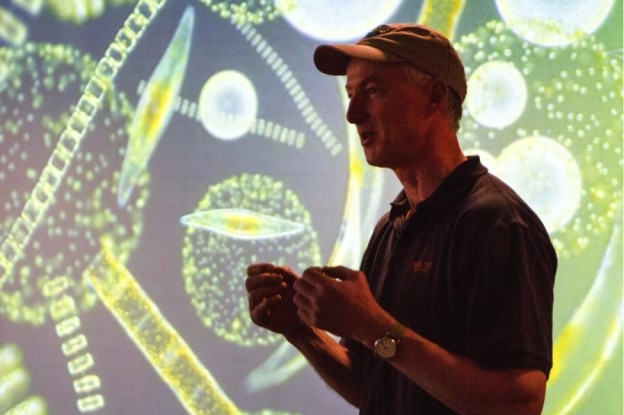 Humans are social creatures. So what better way to connect them to the complex mission of an air and sea campaign to the North Atlantic that studies plankton, aerosols and cloud formation than through a NASA Social event?

On May 10, a dedicated group of 20 bloggers and social media users from around the country travelled to the sea-side village of Woods Hole, Massachusetts – home of the Woods Hole Oceanographic Institution (WHOI) – to hear about the multi-faceted North Atlantic Aerosol and Marine Ecosystems Study (NAAMES) from many of the people involved in its science and to tour the research vessel Atlantis. 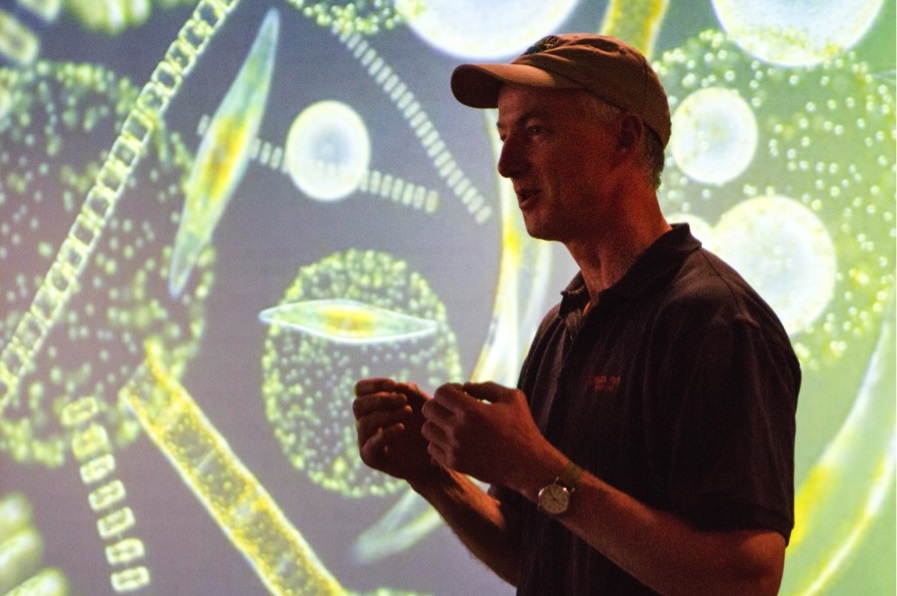 Michael Phillips, a meteorologist who travelled from New Jersey, is part of the Weather Boy team that uses Twitter, Facebook, Snapchat and Pinterest. His team of 15 originally used social media to connect with their TV and radio listeners, but now find that more and more of their half-a-million followers only connect to them through on-line content. Phillips covered the NASA Social because “Earth science and weather content resonates most with our audience.” 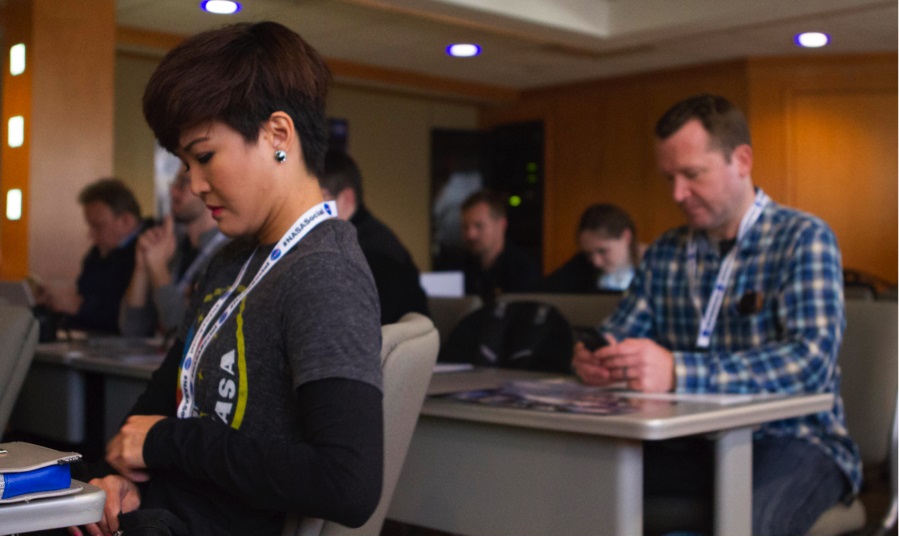 NASA Social attendees were busy reporting to their followers during the NAAMES overview and question and answer session. Credit: NASA/Michael Starobin

Not all attendees hold day jobs related to Earth science or weather. A pastor from a Baptist church, a legal secretary, medical professionals, photographers and outdoor enthusiasts were among the group. The common theme that bound them was an appreciation for Earth science and innovative technology to make new discoveries. And a sense of adventure. Who else would take time off of work to travel to a previously unheard-of Cape Cod village during the off-season, some with family in tow, for an event like this? 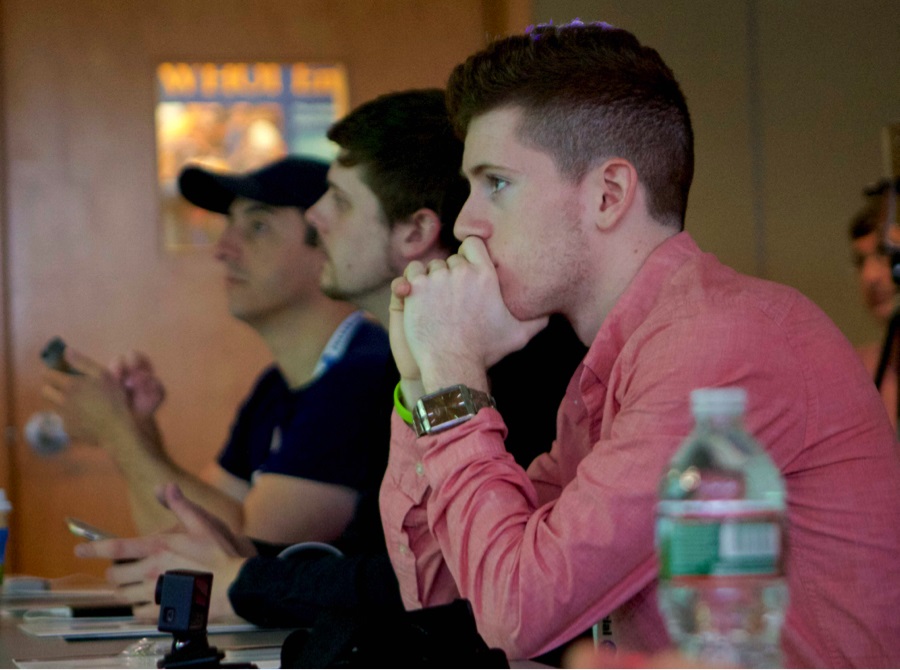 Rapt attention during the NAAMES overview by NASA Social attendees who travelled from all over the country to attend the event. Credit: NASA/Michael Starobin

Attendees enthusiastically tweeted, posted and live-streamed through Periscope and Facebook throughout the day, especially while on the Atlantis. Phillips brought along a cut-out of their Weather Boy cartoon character and tweeted pictures of him around the ship to help audiences connect to the event.

The group toured spaces and equipment used during NAAMES, plus the bridge and living spaces — including the all-important galley. Several scientists emphasized how they build their days at sea around great food and meal times. 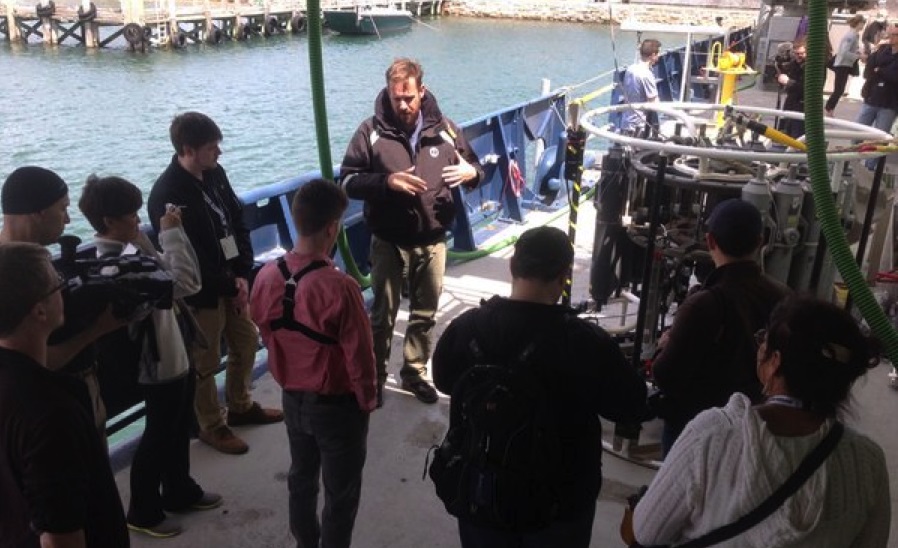 The Social began with an overview of NASA’s Earth science program and the five-year field campaign in the North Atlantic by program manager Paula Bontempi of NASA’s Ocean Biology and Biogeochemistry program.

Journalist Nicole Estephan participated in the first NAAMES cruise last fall and reported how much she cherished her time at sea despite its rough weather. She told the NASA Social participants that storms and high seas made it hard to do simple things like walking and showering. “Every time a wave hits the side of the ship it’s like a cannonball hitting your head,” she said.

NAAMES chief scientist Mike Behrenfeld of Oregon State University emphasized that phytoplankton blooms are very important for sustaining marine fisheries and our climate. When asked if humans are impacting them and, if so, what we can do, WHOI scientist Scott Doney described his modeling work to tease apart natural climate patterns from those caused by humans. The biggest impact humans are having is the emission of carbon dioxide into the atmosphere. Ultimately, the choice to reduce our carbon emissions is our responsibility. After all, humans are social — with the capacity to make new discoveries and solve problems together.