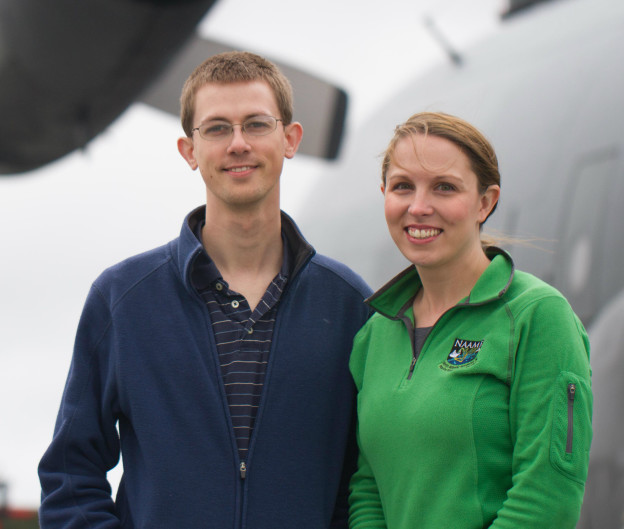 While in the field, plans can change as quickly as the weather. Meteorologists for the North Atlantic Aerosols and Marine Ecosystems Study (NAAMES) constantly provide forecasts for the aircraft and ship teams who, weather permitting, will rendezvous several times over the next few weeks in the North Atlantic — home to the world’s largest phytoplankton bloom. Plankton ecosystems profoundly affect climate and life on Earth.

NAAMES meteorologists Amy Jo Scarino and Michael Shook tend to work behind the scenes, but they are an integral part of making the mission successful. Amy Jo, a Penn State graduate with a B.S. in meteorology, works at NASA’s Langley Research Center. Michael graduated from the University of Kansas with a B.S. in atmospheric science and began working at NASA Langley as a programmer/analyst with the atmospheric composition branch.

Amy, what is your involvement with the NAAMES mission?

AJS: I am one of the project meteorologists and helping out with flight planning.  I am also a member of the High Spectral Resolution Lidar [HSRL] team – one of the instruments on the C-130 – and will assist with processing the data.

How did you end up in meteorology?

AJS: Growing up in Michigan, I always enjoyed the weather, especially watching thunderstorms from the front porch and also lake effect snowstorms.  In high school, I made contact with the local meteorologist in Grand Rapids, Michigan–George Lessens.  He became my mentor, and I learned the ropes of forecasting during an internship at WZZM-13.  George went to Penn State for meteorology, so that is where I decided I wanted to also go for college.  At Penn State I participated in the Campus Weather Service, providing forecasts for The Daily Collegian and select Pennsylvania radio stations.

What is a typical day like to forecast for NAAMES?

AJS: Every day Michael Shook or I prepare the forecast by looking at current observations and then start looking at the latest model runs.  For NAAMES, one of the main drivers is forecasting clouds and the synoptic pattern, but also forecasting sea state [ocean wind and waves] for the R/V Atlantis. We then have a daily forecast briefing with recommendations on the outlook for potential science flight days. On the day of a planned science flight, I am up a couple hours before the C-130 would take off for the go/no-go meeting.  At that time, we are checking current observations and confirming whether the previous day’s forecast still stands or not.  Take a breath and repeat; during a field campaign, the meteorologists don’t take a day off.

How does your work on NAAMES compare to other projects you’ve worked on?

AJS: Other projects I have worked on have been related to applications of the HSRL data from other field campaigns, such as deriving mixed layer heights from aerosol backscatter profiles and relating that to air quality studies. For the first NAAMES mission, I provided the weather forecasts from home base at NASA Langley.  This time I am out in the field and working right with the project scientists, flight planners and the instrument scientists.

Being out in the field, are you going to do anything exciting in St. John’s?

AJS: Gearing up for the second NAAMES mission, I was watching the iceberg field that is in the North Atlantic Ocean off the coast of Newfoundland and Labrador.  I am hoping that while I am in the field I can view an iceberg from Signal Hill or other areas along the coast.

Michael, how did you end up in meteorology?

MS: I’ve always loved the weather for as long as I can remember.  Growing up, I wanted to be an operational forecaster for the National Weather Service.  To work toward that goal, I got my bachelor’s degree in atmospheric science from the University of Kansas.  Through my courses and after graduation, I learned that atmospheric science includes much more than operational forecasting, which is how I ended up as a contractor for NASA working with the Langley Aerosol Research Group and the airborne science data management team.  With my meteorology background, NAAMES asked if I could help them with flight forecasting as well.

What does a typical day in NAAMES look like for the forecasters?

MS: On a day that we don’t have a flight scheduled, we come in around 7:30am to work with the flight planners and project scientist to adjust our plans to account for changes in the weather forecast.  That way, changes in the flight plans can be communicated with air traffic control as soon as possible.  Then we begin reviewing observations and atmospheric and ocean model forecasts to prepare for a 2 pm briefing to the science team, looking for the right conditions to fly over the coming week.  On flight days, we come in as early as 4am to help make the final go/no-go call before a flight, and then help support the scientists in the air by feeding them updated weather information from the ground.

What other work do you do on NAAMES?

MS: In addition to forecasting, I also process data from some of the Langley Aerosol Research Group instruments and create standardized data files that get uploaded to the NAAMES data archive.  In addition, I create combined files—we call them “the merge”—from all the individual instrument groups’ files and the aircraft’s position information.  In a lot of cases, looking at data from a single instrument isn’t as helpful as getting a comprehensive look from all the instruments, so these files are invaluable as the scientists start analyzing the data we’ve collected.

What are you going to do in St. John’s when you’re not working on NAAMES?

MS: If we get some down time, I want to visit Cape Spear, which is the easternmost point in North America.  I’d also love to see an iceberg and try curling for the first time.

How does your work on NAAMES compare to the other projects you’ve worked on?

MS: I’ve traveled to a few field campaigns before to do data processing and merging, but this is the first time I’ve traveled to do forecasting.  On the first deployment of NAAMES, the forecasting team stayed in Virginia, which made it difficult to coordinate schedules and ask and answer the quick little questions that invariably come up.  This is also my first time supporting a field campaign in a different country!