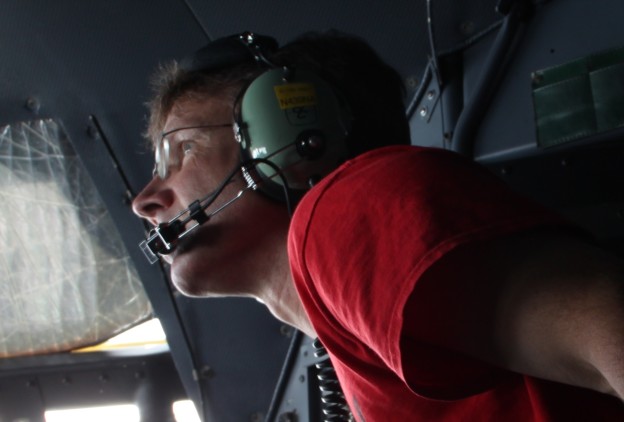 Gathering data on atmospheric carbon dioxide and methane in the skies over the U.S. East Coast can be intense.

ACT-America researchers running instruments such as the Multi-functional Fiber Laser Lidar (MFLL) and ASCENDS CarbonHawk Experiment Simulator (ACES) are generally all business as they monitor their expensive technologies built to measure greenhouse gases.

They stare intently at computer readouts telling them how instruments are functioning. They note subtle changes as their machines gather readings that will help show where carbon dioxide and methane come from and how those gases move through the air.

As soon as pilot Jim Lawson turned the C-130H homeward on July 22 after some four hours of methodical zigzagging above Maryland, Virginia, West Virginia and Pennsylvania, Yonghoon Choi decided it was time for a break.

Choi, who was in charge of the flight’s in situ (meaning “in place”) measurements, reached into a bin beside a tall rack of readouts and electronics and pulled out something tasty.

He produced a plastic bag laden with chocolate morsels, fruit chews and hard candy. Then, he hopped up from his seat and walked through the hold of the C-130H, offering his teammates something sweet.

“It’s our tradition,” Choi said, based at NASA’s Langley Research Center in Virginia. “When we’re going home, we eat candy.”

Choi is a veteran of more than a dozen airborne science campaigns like ACT-America. He’s been taking in situ measurements for some 15 years and has flown on aircraft including the DC-8, DC-12, the P-3, the Falcon and the P-20.

He explained that it’s not unusual for science flights to stretch to 8-10 hours. “After that long, everybody’s tired and ready for a treat,” Choi said, smiling.

On this flight, the ACT-America team encountered mostly clear summertime weather as they flew alternating legs at 1,000 and 10,000 feet. But there were moments of bumping and bouncing. Choi and ACT-America Principal Investigator Ken Davis stayed in close contact as the C-130H crossed in and out of what atmospheric scientists call the boundary layer.

“That was complicated today,” Davis said to Choi as the aircraft flew back toward its home base at NASA’s Wallops Flight Facility in Maryland. There was convection in the lower atmosphere and fluctuations in the boundary layer, the region of the lower troposphere where proximity to Earth’s surface creates turbulent air.

“The data collection was fine, everything was working,” said Davis, a professor at Penn State University. “What we collected represents a relatively complicated state of the atmosphere.” Sources and sinks of greenhouse gasses are in action along with forces that transport them through the air.

“It’s challenging to interpret, but it doesn’t mean it can’t be interpreted,” Davis said. “The world is complicated some days.”