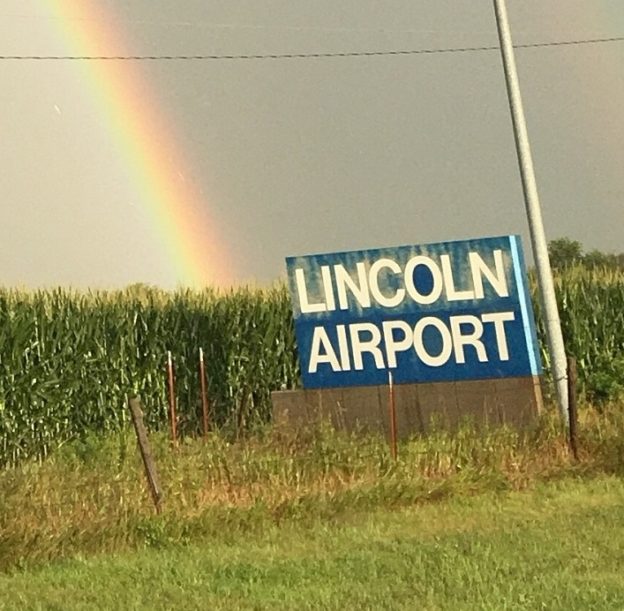 It’s the morning meeting before the day’s flight on Thursday, Aug. 4. Fingers are clacking away at laptop keyboards. Starburst and Jolly Ranchers are scattered across a long table.

Almost as colorful as the candy are the weather maps projected onto the wall. They show a weather front slicing clean through Nebraska. Storms are likely later in the day. We’ll soon be chasing carbon dioxide and methane around both sides of the front in NASA’s C-130 Hercules research aircraft.

The flight is part of the Atmospheric Carbon and Transport–America, or ACT-America, campaign, which is investigating how weather systems and other atmospheric phenomena affect the movement of the two greenhouse gases in the atmosphere.

Our flight path will take us into the northwest corner of Missouri then back north through Nebraska and into South Dakota.

“We’re going after something that should be dominated by transport,” says Ken Davis, principal investigator for ACT-America from Penn State.

In the minutes before everyone heads out to the aircraft, a reporter from the Lincoln Journal Star calls. He’s hoping to find out what NASA is doing in Lincoln.

It’s a fair question. Amid the hubbub of people prepping for the flight, Davis explains to the reporter that the Midwest is a region ripe with greenhouse gas fluxes, or areas where lots of greenhouse gases are exchanged between the biosphere on land and the atmosphere.

Agriculture is a huge factor. The vast, seemingly endless fields of corn and soybean in the area gobble up a lot of carbon dioxide. Cows and other livestock produce copious amounts of methane. Coal operations in Wyoming, and oil and gas production in the Dakotas contribute to the complex atmospheric chemistry as well.

“It’s the kind of ecosystem we want to understand,” Davis tells the reporter.

Weather plays a factor, too. Big storms churn up the gases and move them around.

“This is where the storms form,” Davis says. “Many mid-latitude cyclones are born on the eastern slope of the Rockies.”

On the C-130, not long after takeoff, Davis climbs the stairs into the cockpit.

“After we get to the end of this,” he says, gesturing out at the clouds, “we’re going to spiral down, turn around and fly at about 1,000 feet.” He moves his hands up and down to simulate turbulence. “That’s usually pretty fun.”

And it is. The first time. Another bouncy low-altitude run later in the flight puts my inner ear to the test.

Other than that, though, it’s a relatively smooth, comfortable ride — even with a fair number of altitude changes. Those changes are important. They allow the science instruments to gather data in different layers of the atmosphere.

In fact, the remote sensing lidar instruments can be dangerous at lower altitudes. A zap from one of the lasers could do real damage to the eyes of someone looking up through a pair of binoculars. That’s why lidar instruments have to be turned off at altitudes below 6,000 feet.

As he watches real-time data from his in situ instruments scroll across a computer monitor, DiGangi occasionally reaches into a nearby storage bin and pulls out handfuls of pretzels or cheddar popcorn. He offers to share.

He’s joking. Sort of. But snacks and drinks are relatively easy to come by on the aircraft, anyway. There’s a microwave, a little refrigerator and even a coffee maker.

After five mostly nausea-free hours in the air, the C-130 lands back in Lincoln.

“[Lincoln’s] not as exciting as traveling to some exotic part of the world,” Davis joked to the newspaper reporter that morning.

He’s right. It’s not exotic. But following a vicious thunderstorm that rips through Lincoln a couple of hours after the flight touches down, a vivid double rainbow arcs over the airport. It’s visible from end to end. Yeah, it’s not tropical beaches and palm trees, but it’s a beautiful sight nonetheless.