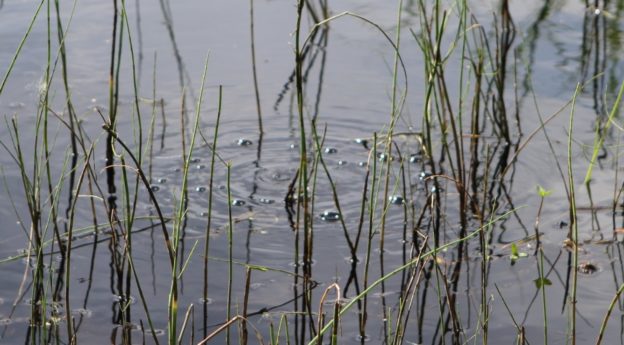 At first glance, it looks like a typical, picture-perfect lake. But scan the reeds along the shore of this pool on the outskirts of Fairbanks, or glance at the spruce trees lining the banks, and you notice something different is going on.

Bubbles. There are bubbles popping up among the reeds, like bubbles from a fish tank aerator. A couple clusters, steady streams of small half-circles, vent near the shore. Then another group appears in deeper water.

And the trees. Some of them are not growing in the directions trees normally do. They stick out drunkenly over the lake, then take a turn upwards at the top.

The explanation for both of these features is in the soil. Permafrost—soil that remains frozen year-round—lies underneath the moss, needles and topsoil of the site. As that permafrost thaws, the ground above it can sink, knocking trees askew and forming pools of water called thermokarst lakes.

“The carbon locked in permafrost for thousands of years is released to the lake bottom,” said Prajna Lindgren, a postdoctoral researcher at the University of Alaska, Fairbanks, Geophysical Institute.

These lake beds, she explained, provide a perfect environment for microbes to eat up the carbon released from the thawing permafrost. This produces methane—a potent greenhouse gas that is released in bubble seeps. As part of the NASA-funded Arctic Boreal Vulnerability Experiment, or ABoVE, Lindgren and her colleagues are studying these seeps and mapping how thawing permafrost is affecting the changing lake edges.

“We’re trying to establish the amount of methane that’s released from these lakes,” she said.

To do that, the scientists are combining old aerial photos with satellite images and new surveys of lakes across Alaska. They’re looking at how the shapes and sizes of lakes are changing over time, which is an indication of where permafrost thaw is altering the landscape. Then, they examine how changing landscapes are associated with the methane seeps. In the fall, as soon as the lakes freeze over, the bubble-measuring fieldwork begins.

“If there’s no snow on the lake and its just black ice, when you walk out you see distinct bubbles in the lake ice,” Lindgren said. The methane bubbles get trapped in the ice, fusing together in pancake shapes, that the researchers can plot and measure.

“We see a lot of these seeps clustered where the lakes are changing,” she said. The next steps will be to estimate methane release based on the extent of lake changes. And for lakes beyond the researchers’ reach, such as those in remote areas of Alaska and northwestern Canada, the goal is to estimate methane release based on how the lakes are changing, as seen in satellite images.

A new study, funded in part by ABoVE, compared old aerial photos from the 1950s with recent satellite images to measure changes in lake outlines, for example. Using this information, methane measurements, radiocarbon dating and other techniques, the scientists calculated how much old carbon, stored for thousands of years in the permafrost, has been released over the past 60 years.