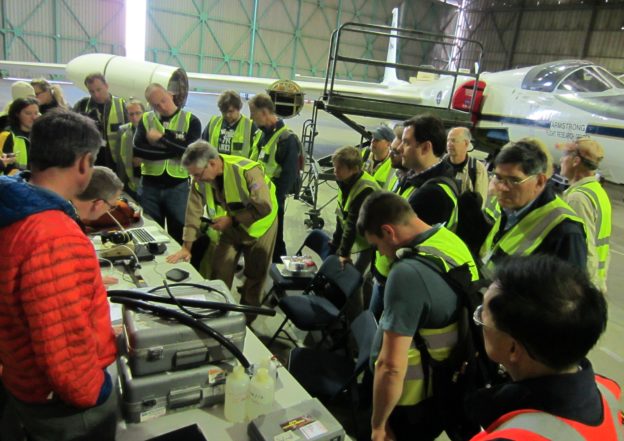 It’s chilly at 6 a.m. at the Walvis Bay Airport on Wednesday, Aug. 31. Only a couple of employees are here, two hours before the usual work day starts, to scan through security the science team for NASA’s ORACLES mission who are getting ready for the first complete science flight.

The airport is less than a year old with commuter flights from across southern Africa. It’s a tiny, two-story terminal, taking barely a minute to walk from one end to the other. It’s waiting area is still shiny and new, with red seats that will be filled by tourists coming and going in a few hours. But for now it is quiet.

On the runway in front of the hangar, the crew of NASA’s P-3 turbo prop aircraft readies it for flight. Today’s flight plan is called “Routine 1b.” “Routine” because the track — northwest from the airport over the Atlantic then turning due west — will be the regular route the team will fly over the next month to measure the low-lying clouds off the coast and the layer of aerosols above, primarily smoke from seasonal agricultural fires in central Africa.

The “1b” is for first flight, second attempt. Tuesday’s attempt at “Routine 1” ran into a minor technical issue with the aircraft half an hour into the flight that caused it to return early to base.

“There’s a real sense of excitement now that we’re here,” said David Noone of Oregon State University, one of the 24 scientists who was aboard the P-3 with an instrument to measure isotopes of water vapor. The water vapor that travels with the aerosols has a different fingerprint than the water in the clouds, and the measurements tell him how the two are mixing.

“We’ve been planning this experiment for three years,” said Noone. “So many people, so many logistics, so many challenges. To be here to start answering these critical science questions that affect future climate is really awesome.”

Aerosols and how they affect clouds are two of the biggest unknowns in climate science. The only way to learn how they work and affect Earth’s energy balance – how much heat sticks on the planet – is to fly through them both.

The P-3 is loud (best wear your ear protection!) when it fires up. Its propellers kick up a cloud of Namibian desert dust as it moves along the runway. At 8:00 a.m., it’s wheels up and they’re off.

Back in Mission Ops, a conference room at the Swakopmund Hotel a good 45-minute drive from the airport, the non-flying ORACLES scientists monitor the flight for the next eight hours. A web page projected on the big screen shows the plane’s location. A chat program allows the Earth-bound team to communicate via satellite with Rob Wood, the ORACLES flight scientist in charge on the P-3.

“This was my first flight on the P-3,” said Wood, ORACLES deputy principal investigator from the University of Washington, Seattle. “I was a little nervous about what I needed to do as flight scientist. It’s a totally new system to me. But the crew worked wonders to make it easy and get me fit into their system.”

After a long seven-and-a-half-hour flight, the whole science team is happy.

“It’s always good to get that first flight under your belt,” said Wood with a big smile on his face. “It’s even better when it’s such an amazing flight. This was up there with the best of my career.”