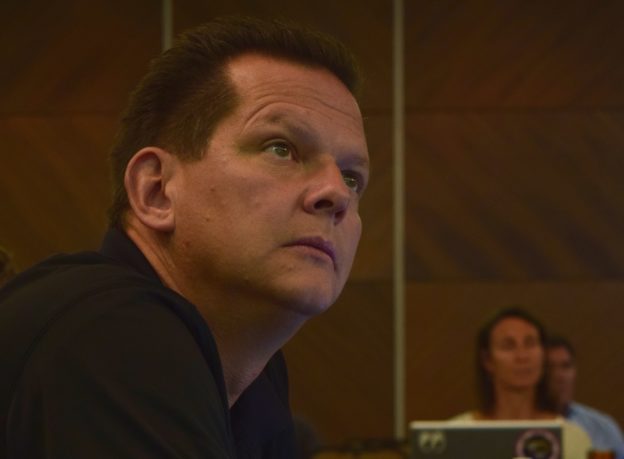 Planning a science flight does not appear to be most exciting part of a NASA airborne mission, even from an exotic location like the Namibian coast where we are now for the ORACLES mission. No planes. No high-altitude views. Just a group of people on computers sitting at long tables in a windowless conference room staring intently at a projector screen.

“I couldn’t disagree more that it’s unglamorous,” said ORACLES principal investigator Jens Redemann of NASA’s Ames Research Center. “I am so excited to be here planning the flights. It’s the promise of a great flight, like visualizing the greatest possible outcome. It’s the perfect flight that we’re on the hunt for every time. You don’t think about anything else while you’re flight planning.”

The work they’re doing at this 8:00 a.m. meeting literally drives the mission. The forecasting team shows videos of slow-moving model projections of the clouds and aerosols over central and southern Africa and the Atlantic Ocean all the way out to Ascension Island. Like fishermen discussing where to find the best catch, they discuss in excruciating detail where they think the best clouds and aerosol plumes will be.

Like any other prediction of the future, however, these models are not 100 percent correct all the time.

“We know that models aren’t perfect,” said Karla Longo of the Global Modeling and Assimilation Office at NASA’s Goddard Space Flight Center. The Goddard Earth Observing System or GEOS-5 model, for instance, tends to underestimate low-level clouds in this region.

“We have to use it here though so we understand when and why it’s wrong. People don’t always feel good about it, but it’s the only way to improve,” said Longo.

Part of the forecast briefing is devoted to looking back to the previous flight and comparing the forecast for it with what the plane actually found. Over the coming months and years, the ORACLES measurements will be used to update the physics that drive the model.

Meanwhile the science team is riveted because flawed or not, these are the images they need to plan the next flight.

On an airborne mission like this there’s not a preset plan of where and when they will fly. Planning is done day by day. It’s a balance between the need for aircraft crew rest and the potential for good clouds and aerosol plumes to measure.

“We’re always concerned about low-level clouds and the amount of smoke in the biomass burning plumes,” said Redemann. “The juggling act is that our science objectives are diverse enough that we look for different plume and cloud characteristics on different days.”

After the forecast briefing to plan the flight for Friday, Sept. 2, Redemann gathers around a whiteboard with a few of the instrument scientists to hash out the nitty-gritty details of the main science section of the flight. The focus of Friday’s flight is radiative balance. They will design the flight plan to maximize the measurements taken by the Solar Spectral Flux Radiometer, which gauges the brightness of the clouds to determine the energy – light – in the atmosphere coming from all directions – directly from the sun, filtered through clouds, and reflected by clouds.

“The aerosol plume has a different effect on the radiation balance depending on whether the plume is above smooth or broken clouds,” said Redemann. Aerosols can have either a cooling or a warming effect, depending on the brightness of the clouds below. “We’re trying to verify that experimentally in flight.”

The science planning conversation is long and involves a shorthand language, squiggles on the whiteboard and questions like “Do you want to spiral here?”

Once they figure out the science plan, the pilots come in and work with the team to write their flight plans,  including when and where to fly the aircraft from the cloud tops down to a few hundred feet above the ocean surface in a corkscrew-like spiral.

By the end of the day it all comes together, and all that’s left is for the science teams to decide who gets to fly onboard with their instruments.