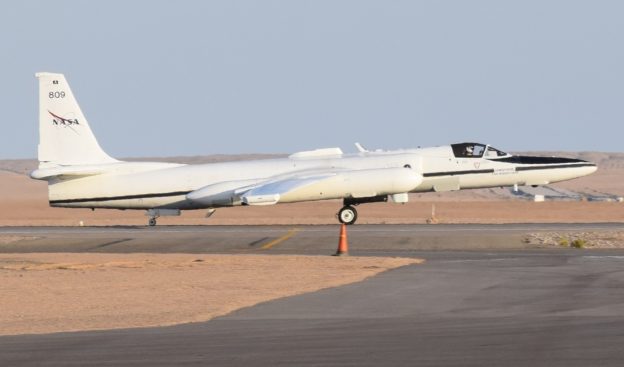 “The view is incredible. You can see 300 miles away,” he said from the cockpit of NASA’s high-altitude ER-2 research aircraft. “You can see the curvature of the Earth. If you look up, the sky is very dark blue.”

Of course, for the ORACLES mission now in Namibia studying low-level clouds and aerosols over the south-east Atlantic Ocean, the view of never-ending white is not going to be quite so exciting for the pilots, he added with a grin. There’s more to flying high than the view.

“I kind of like the solitude, too. It’s my happy place. No matter what’s going on in my life, when I close the canopy, and especially when I leave the ground, I know I’ve got 12 hours of alone time. Busy alone time,” Broce said.

A retired Navy pilot, Broce flew commercial for nearly a year before post-9/11 furloughs led him back to the military, this time the Air Force, where he learned to fly the high altitude aircraft. As luck would have it, around the time he was retiring, NASA was hiring, and Broce has been flying the ER-2, as well as other aircraft, for NASA for the last five years at Armstrong Flight Research Center in California. He’s one of two pilots flying the ER-2 for the ORACLES mission this month.

It’s a challenging aircraft to fly. Landing in particular. “It’s like landing a big 30,000 pound bicycle,” he said. The ER-2’s two main sets of wheels are under the body. The wheels that prop up the wings on the ground drop off during take-off and don’t fly.

The ER-2 is a small, lightweight airplane with a single occupant: the pilot. Its job is to get the long view of the clouds below. Tucked into its nose, body and a pod under each wing, the ER-2 carries four remote-sensing instruments to 65,000 feet, twice the altitude of commercial airliners.

“The only people higher than us are the astronauts in the space station,” said Broce. “We fly so high, we fly above Armstrong’s line at 60 to 62,000 feet, where if you took a cup of water at altitude outside the plane, the water would boil just because of the low pressure there, even though it’s super cold.”

People don’t do so well at those low pressures. The pilots wear space suits that will pressurize in case of a loss of cabin pressure. Part of their prep is to breathe pure oxygen for an hour before flight to purge the nitrogen from their bodies so they don’t get the bends when they ascend so quickly. Food and water for the eight plus hours in flight both come through a tube – applesauce, pear-sauce, and peach-sauce are among Broce’s favorites, which he said are actually pretty good.

The instruments, on the other hand, do great at 12 miles above the Earth. While they’re not as high as satellites, some of the instruments simulate satellite measurements. Aboard the ER-2 they both test out new technology and software and get the equivalent of satellite data right where the scientists want it.

The science team is trying to understand the interaction of clouds and tiny airborne particles – smoke from fires central Africa – and how they change the amount of energy absorbed or reflected from the clouds, a key component for assessing how clouds affect Earth’s climate.

Broce helps out with gathering the data. The instruments are as fully automated as can be, but he still needs to turn them on after take-off and sometimes during flight switch their modes.

“I like to count the number of button presses per hour. It’s ‘BPH’ — my term. If it’s above ten, I consider that busy because you have to read checklists and know when to hit the button and check miles and time and locations. We also have to navigate and fly the plane, sometimes to precise navigation or headings, and then push the buttons.”

At the end of the day, the goal is to return measurements to scientists waiting on the ground.

For more on Broce’s work as ER-2 pilot for ORACLES, visit Notes From the Field: ORACLES in Namibia 2016.

(Note: This wraps up our reporting from Namibia. Click here for all the ORACLES blog reports.)