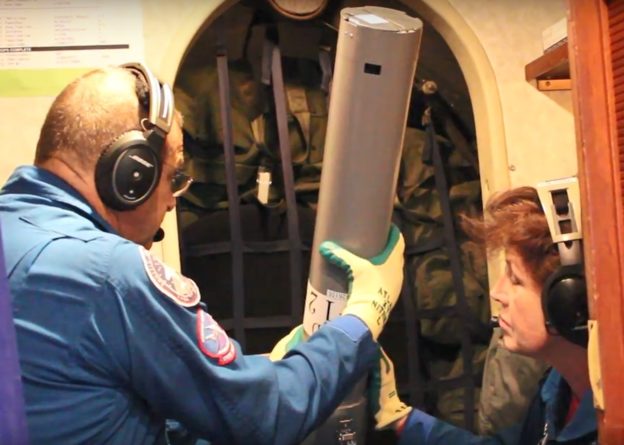 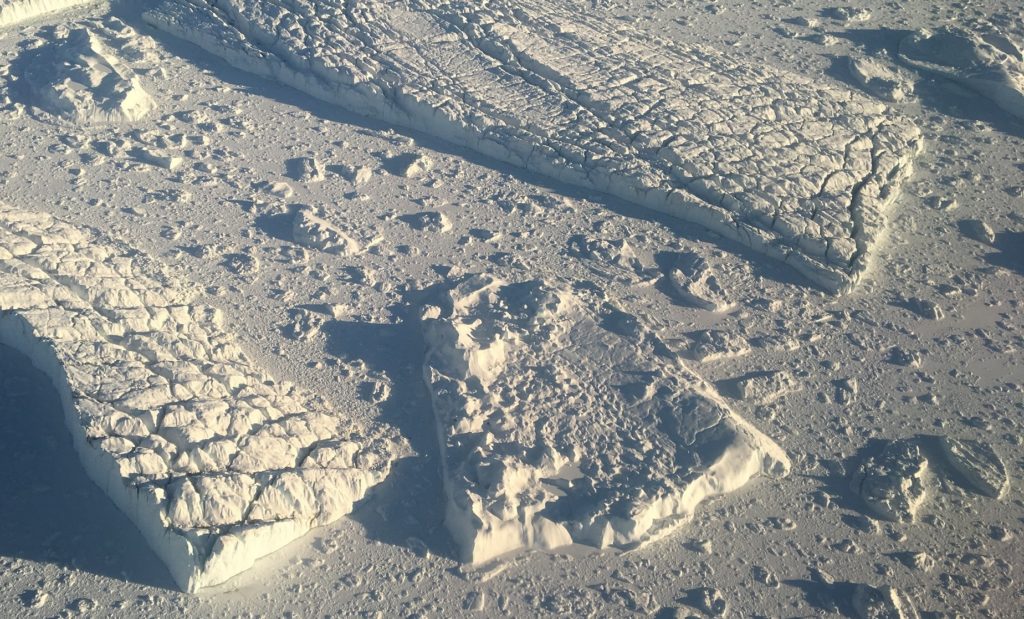 Over the last three weeks, the Oceans Melting Greenland team has spent many hours flying over spectacular Arctic scenery. Fjords, glaciers, icebergs, the northern lights — they’ve seen enough sights to fill a guidebook. But the most compelling view, the view they came all the way north to see, is on a computer screen inside the plane.

OMG is in the field this fall to do one thing 250 times: drop ocean probes from an airplane around the entire coast of Greenland and read its measurements of ocean temperature and salinity. Relayed to the airborne computer, the data from the probes shows where warm, highly salty, subsurface Atlantic water is able to reach the bottoms of glaciers along the coast.

This water is warm only in comparison with the polar runoff that forms the surface layer, but its extra 6-8 degrees Fahrenheit (3-4 degrees C) makes it plenty warm enough to melt glacial ice. The polar water can be as cold as 4 degrees below freezing Fahrenheit (-2 degrees C). At those temperatures it doesn’t melt ice at all.

On 13 research flights since Sept. 13, the team has dropped 163 of the probes around all of Greenland except the southeast coast. They’ll pepper that coastline with the remaining probes from their new location in Keflavik, Iceland.

In the last year or two, various research teams have done seafloor surveys of a few Greenland glaciers and found deep gashes on the edge of the continental shelf where subsurface warm water can creep up on the shelf and melt the glaciers more quickly than the colder shallower water. But these few locations to the whole coastline would be risky business. Willis says that when they began the survey in mid-September, “I didn’t know what to expect. We knew that Atlantic water was getting into a few of these fjords, but the shelf has not been measured extensively before, and satellite data won’t tell you if warm, salty Atlantic water is there because it’s so far below the surface. You have to go drop a temperature sensor in the water.”

The probes relay their measurements in real time to the airborne computer, so the OMG team got views of subsurface conditions starting with the very first drop. As the measurements kept rolling in, the view from the computer screen became more and more disturbing.

“Very soon, it became clear that there was a good deal of warm water on the shelf — not just in the fjords but spread out. As we mapped farther and farther north, we could see more warm water on the shelf. Now we’ve sampled [most of] the continental shelf, and everywhere that it’s deep enough, there seems to be Atlantic water present,” Willis said.

It’s unlikely that the southeast section will contain surprises, he added, because scientists already know that glaciers in this sector are melting very quickly and ocean warming is evident on the surface.

Willis emphasizes this is only a first impression from watching the data on screen. However, he pointed out, “Every time we make a discovery about ice melt in Greenland, we find the picture is worse than we thought it was before. I don’t think this will be any exception.”

Crew members of NASA’s Oceans Melting Greenland mission have seen extraordinary sights during their latest deployment, both from the plane and at their four bases. Here are a few highlights.