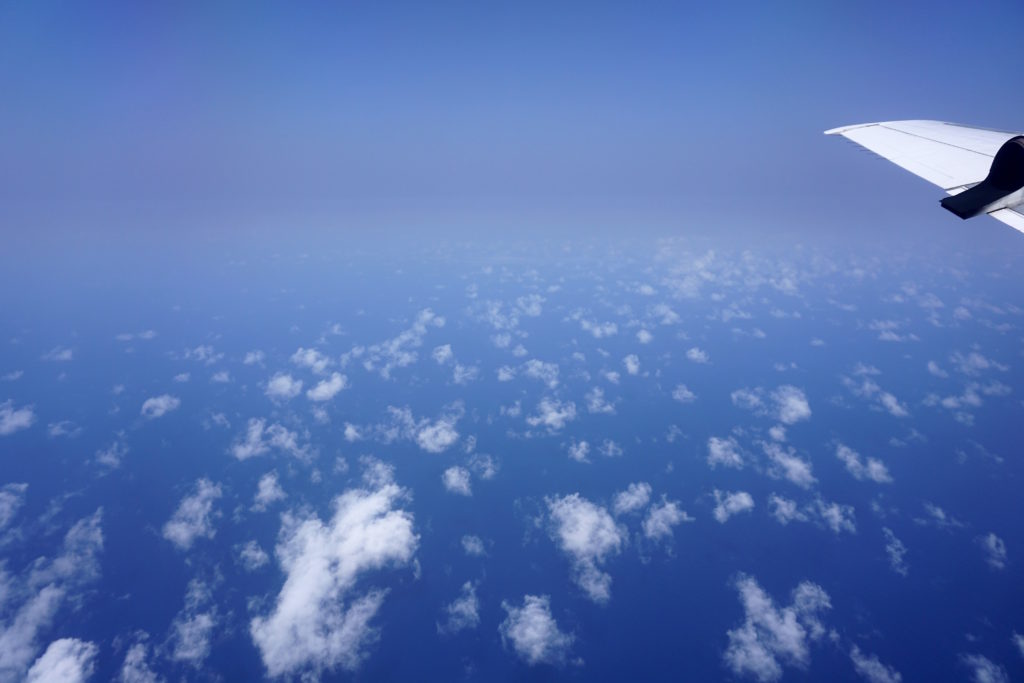 A view from the window of the P-3. A layer of smoke is visible over patchy clouds. This is somewhere over the Atlantic Ocean, quite possibly near the [0˚, 0˚] point, where the Prime Meridian crosses the Equator. Credit: NASA/Kirk Knobelspiesse

We can’t build a scale model of planet Earth to study in a laboratory, but we can on a computer. But how do we know a computer model we’ve built is right—or even how to build it in the first place? For atmospheric scientists like myself, the answer is measurements: from satellites, from instruments on the ground, and from airplanes.

This is how I find myself on the small African island of São Tomé, curled up inside the ‘bomb bay’ of a NASA P-3 aircraft pouring liquid nitrogen into a specialized camera called the Research Scanning Polarimeter (RSP). This is a long way from home: I work at the NASA Goddard Space flight center in Greenbelt, Maryland.

So, why São Tomé? We’re pretty close to a phenomenon that beguiles climate models and is difficult to observe by satellites – so we need to fly there instead. It all starts with ocean currents, which bring cold, deep ocean water to the surface (known as upwelling). There’s a strong current off the southwest coast of Africa called the Benguela current. The upwelled water, in turn, causes a low, semi-permanent cloud deck to form at certain times of the year – much like June Gloom in Southern California, for example. From a climate perspective, these clouds can be cooling because they reflect the sun’s energy back to space. What’s unique about where we are is that there is a tremendous amount of biomass burning nearby in sub-Saharan Africa, from both agricultural fires and natural forest fires. The smoke from these fires gets blown west, out over the clouds.

Atmospheric scientists call suspended particulate matter “aerosols”—and smoke is a type of aerosol. When suspended above clouds, aerosols can do a couple of things that impact climate. Most directly, smoke aerosols make the clouds look darker, meaning that less of the sun’s energy is reflected back to space. But the aerosols can also modify cloud properties by serving as seeds for cloud droplet formation, for example, or modifying the temperature of the atmosphere, changing how clouds form.

We know all of these things happen, and we include them in our climate models. The uncertainty boils down to how often they occur, and to what magnitude. The root of the problem is that we don’t have all the measurements we need. Satellites provide a nice snapshot, and many of our colleagues at NASA and elsewhere develop instruments especially devoted to the measurement of clouds and aerosols. They don’t, however, simultaneously measure all of the things we need to know, such as the optical and chemical properties of smoke and its exact location, or smoke in the act of modifying cloud properties.

This is why field campaigns, which make targeted observations to resolve specific scientific questions, are so important. I’m here as part of the ObseRvations of Aerosols above CLouds and their intEractionS (ORACLES) field campaign. (Yes, we love our tortured acronyms.). Last year, we sent two airplanes stuffed to the gills with instruments to Walvis Bay, Namibia, and we flew northwest to our area of interest. This year, we’re flying south and west from São Tomé. We’ll return again next year.

This year we’re working with one aircraft: the NASA P-3. The P-3 is a four-engine turboprop designed as a maritime surveillance aircraft for the US Navy. It is ideal for our purposes because of its endurance, size and ability to fly at very low altitudes. We have a wide variety of instruments on the P-3. Some are in situ, meaning they sample the air as the P-3 flies through a cloud or the aerosols, and they tell us size, chemical composition, and other information specific to the aircraft location. Others are remote sensing instruments, meaning they observe the scene from a distance (usually above). Examples include a downward looking precipitation radar, or a lidar, similar to a radar but using a pulsed laser beam instead of radio waves.

The Research Scanning Polarimeter (RSP) also falls in the remote sensing category. It is a passive scanner, meaning it makes a measurement of light reflected from a location under the aircraft at many different angles. One thing we’re looking at is the cloud bow, which is similar to a rainbow, but involves refraction of light from cloud—not rain—droplets. Precise measurements of the cloudbow can tell us the size of the cloud droplets at the top of a cloud, which in turn indicates the cloud meteorological state, whether or not the aerosols are interacting with the cloud, and so forth. We can also determine optical properties of aerosols above the cloud, but analysis of the data requires lots of computing power and can’t be performed easily in the field. My primary role in ORACLES is to improve this analysis, and along with my colleague, Michal Segal Rozenhaimer, we’re looking into using a type of artificial intelligence to “train” a computer to analyze our data.

This is largely done at home, so here in the field my job is to be one of the team members that ensures the RSP is working properly. This means operating the instrument in flight, participating in creating flight plans, and, yes, periodically pouring liquid nitrogen inside. (The instrument sensors work best when they’re very cold.) So even if the “bomb bay” is cramped and noisy, and I’m quite literally thousands of miles from home, I feel very fortunate to be here and a part of this field campaign.