Katey Walter Anthony, an ecologist at the University of Alaska-Fairbanks, dips her paddle into the water as her kayak glides across the lake. “Years ago, the ground was about three meters taller and it was a spruce forest,” she says.

Big Trail Lake is a thermokarst lake, which means it formed due to permafrost thaw. Permafrost is ground that stays frozen year round; the permafrost in interior Alaska also has massive wedges of actual ice locked within the frozen ground. When that ice melts, the ground surface collapses and forms a sinkhole that can fill with water. Thus, a thermokarst lake is born.

Walter Anthony is a researcher collaborating with NASA’s Arctic Boreal Vulnerability Experiment (ABoVE) project. She’s studying the formation of these thermokarst lakes and how this process is caused by and contributes to Earth’s changing climate.

“Lakes like Big Trail are new, they’re young, and they are important because these lakes are what’s going to happen in the future,” she explained.

At first glance, Big Trail looks like any lake. But look closer and there’s something disturbing the surface: bubbles.

Two things happen as the permafrost layer thaws beneath lakes: microbial activity increases and pathways form in the permafrost . At Big Trail Lake and other thermokarst lakes in the Arctic, microbes digest dead plants and other organic matter in the previously frozen soil in a process that produces carbon dioxide and methane. More rarely, permafrost thaw can form ‘chimneys’ under lakes that allow methane and other gases – previously trapped deep underground – to escape. This release of ‘geologic’ methane is happening at Esieh Lake, another of Katey Walter Anthony’s ABoVE study sites. In all thermokarst lakes, the gases bubble up to the lake surface and release into the atmosphere.

“At Big Trail Lake, it’s like opening your freezer door for the first time and giving all the food in your freezer to microbes to decompose. As they decompose it, they are belching out methane gas,” says Walter Anthony. She leans over and pushes her paddle into the spongy ground under the water, causing clusters of methane bubbles to erupt on the surface.

As the lake freezes in the winter, the bubbles can prevent ice from forming and create pockets of open water that continue emitting methane throughout the season. In other areas, the methane bubbles create frozen domes of ice on the surface of the lake.

“Once ice has formed on these lakes, the rising methane bubbles will freeze into the ice,” explains Franz Meyer, Chief Scientist at the Alaska Satellite Facility in Fairbanks. Meyer is also one of the chief scientists for NISAR, a joint NASA and ISRO satellite that will study our planet. One of the instruments that will be on NISAR is a radar similar to the instrument the ABoVE team is flying over Arctic and boreal regions to study the ground, ice and lakes below.

“These bubbles that we see in the ice change the way that the radar signal interacts with the ice surface,” he explains. The radar can detect roughness – like from frozen methane bubbles – on the surface of the land, ice and water below. Thermokarst lakes with a high roughness, or more bubbles, tend to have higher methane emissions compared to smooth lakes. Combining the airborne radar data with measurements collected in the field allows scientists to estimate how much methane lakes are emitting across a large region.

Walter Anthony says she has something to show us and paddles over to what looks like a piece of trash: an upside down plastic bottle sticking out of the water. It’s a methane collection device, she says, explaining that the bottle traps methane as it bubbles up through the water. Walter Anthony turns a valve and collects a sample of the gas in a smaller bottle, which her team will chemically analyze to determine the age and concentrations of the various gases within.

But there’s a faster way to know if the lake is releasing methane.

Walter Anthony opens the valve, lights a match, and holds it to the opening. A burst of flame ignites. She lets the flame burn for a few seconds and then turns off the valve. It’s like a more extreme version of lighting a gas stove.

There are millions of lakes in the Arctic, but only the newer ones are releasing high amounts of methane. That’s because most Arctic lakes are hundreds or thousands of years old. Those lakes used to be just like Big Trail Lake, but the microbes there have since run out of permafrost organic matter to decompose, and instead are emitting methane from more modern carbon sources. That means the older lakes are no longer emitting as much old methane.

“So what’s a concern for the future, when we think about permafrost carbon feedback, are areas that are newly thawed,” says Walter Anthony. Just like Big Trail Lake.

There’s a freezer door in the mountainside outside of Fairbanks, Alaska. Tom Douglas opens it and we step inside, breathing in cold air and musky dust as we start to walk back through time.

This isn’t fantasy. It’s the Permafrost Tunnel run by the U.S. Army’s Cold Regions Research and Engineering Laboratory in Alaska, where Douglas is a Senior Scientist.

Recently, Douglas led a group of scientists and pilots with NASA’s Arctic Boreal Vulnerability Experiment (ABoVE) on a tour through the Tunnel to learn about permafrost. Permafrost is any soil, ice, or organic matter like plant material or bone that has stayed frozen year-round for at least two years. The tunnel was initially excavated in the 1960s and has been expanded since 2011. Now, the Permafrost Tunnel has almost 500 meters of excavation. “There’s just nowhere else on Earth that has this type of access to permafrost,” said Douglas.

The ABoVE team studies permafrost thaw and its impact on landscapes and ecosystems across the Arctic from the air and above the ground. They also work in conjunction with CRREL and other scientists to figure out how measurements made in and above the permafrost tunnel can be extrapolated to airborne measurements taken from research aircraft. But for many of the ABoVE team members, this is their first time getting to see permafrost up close.

The frozen soil near the tunnel entrance is the same ground that mammoths and steppe bison walked on around 18,000 years ago – and it has the bones to prove it. But as we move deeper into the tunnel and further back in time, these signs of animal life disappear.

Douglas stops at a yellow tag in the deepest, farthest back part of the tunnel. He points out an alder branch sticking out of the wall. “This is the oldest thing in here,” he says. “It’s nearly 45,000 years old.”

Most of the permafrost tunnel is densely compacted dirt and rock. In some places, frozen grasses and other dead plant matter are buried within the walls or hanging from the ceiling. As we walk down further into the tunnel, Douglas points out different features: the thin horizontal lines that show how the land surface moved up over time, strips of ice from water that pooled atop the permafrost and froze, and giant ice wedges.

Arctic permafrost is thawing at an accelerating rate. As permafrost thaws, those ice wedges in the permafrost melt. This creates holes in the ground that can cause the land surface above to subside. This process is called thermokarst – and it’s drastically changing landscapes not only above the Permafrost Tunnel but at locations across Alaska and northwestern Canada. In some areas, the ground is sinking or caving in. In others, new bodies of water called thermokarst lakes are forming. 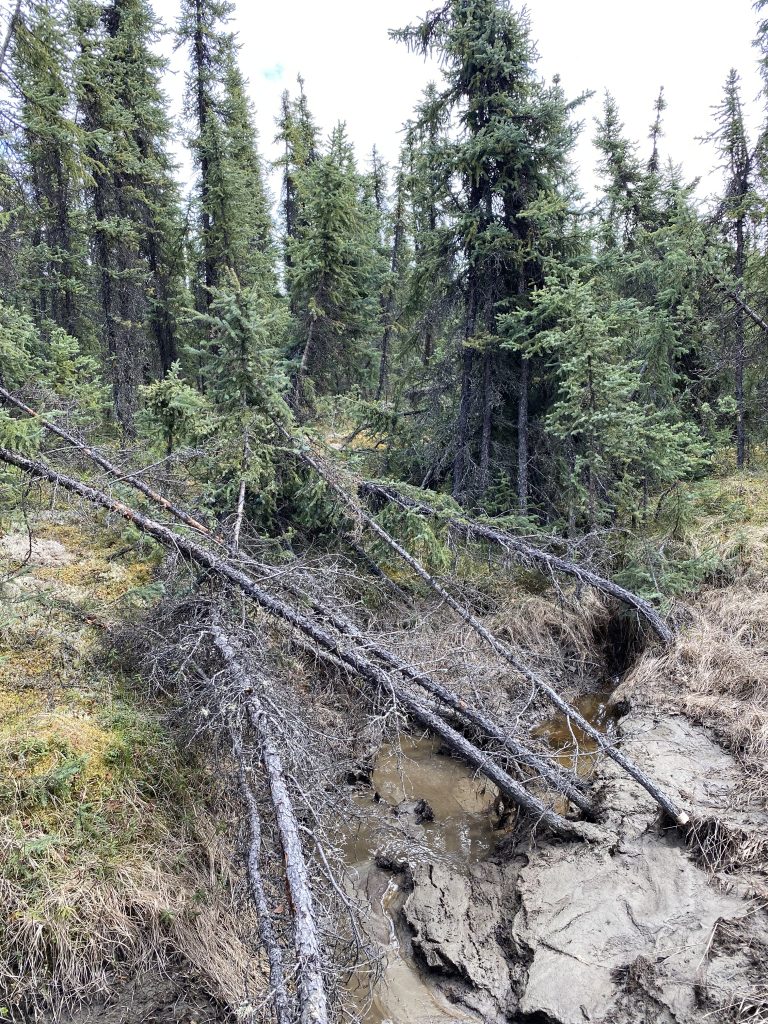 As we walk through the tunnel, Douglas reminds us that just above our heads is a boreal forest with grasses, shrubs and trees. CRREL scientists have taken measurements above and belowground to try to relate changes in the land surface above to features  in the permafrost layer belowground.

Different vegetation types grow on ground that has frozen versus on thawed permafrost, he explains. Black spruce and sphagnum mosses tend to grow above the hard, frozen silt of permafrost. In areas where permafrost is thawing, the trees are often stunted or tilting to the side. Areas with thermokarst features also tend to have vegetation often found in wetlands. wThawing permafrost also changes the soil moisture content. The ABoVE team is measuring both of these factors – vegetation type and soil moisture – from aboard the NASA 802 research aircraft with a radar instrument called UAVSAR.

The work scientists are doing at the CRREL permafrost tunnel helps connect features in the permafrost layer to changes in the ground above that can be remotely sensed with airborne radar instruments – changes the ABoVE team is studying across Alaska and northwestern Canada with research aircraft.

“Measurements we make here at the tunnel can be projected and scaled to help us track these changes across the broader Arctic,” said Douglas.