Skip to content
For more information, please visit http://www.FragileOasis.org.
Welcome to “Three Ships Pass in the Night” Part II, the story of Space Shuttle Endeavour’s visit to the International Space Station.
Things are back to normal after the departure of the Space Shuttle and the crew of STS-134. I’ll tell the story of their visit in a series of short recollections.
A Rendezvous with Endeavour
On Wednesday, May 18th, the Expedition 27 crew aboard the ISS spent the morning getting ready for the arrival of our visitors.
Just after lunch — or what we on the ISS call “the mid-day meal” — all the ISS crewmembers gathered in the Russian Service Module as Endeavour arrived 600 meters below.
Cady, Paolo and Dima each positioned themselves in one of the six Earth facing windows to photograph Endeavour’s thermal protection system (heat shield).  Cady had a 400mm lens, Paolo an 800mm lens and Dima used a 1000mm lens. I was armed with a stopwatch in each hand, and the plan for how we were going to document Endeavour’s red carpet arrival.
After pausing 600 meters below us, Endeavour began a 360 degree flip so that the bottom of the orbiter would be visible to us on the Space Station. The photo-documentation of the underside of the Space Shuttle is used to clear the Shuttle for re-entry and landing after the docked mission is complete.  Through most of the maneuver we were two spacecrafts traveling over Europe. The view was just beautiful. But the most beautiful view of all was what we did not see: any obvious serious damage to Endeavour’s heat shield. 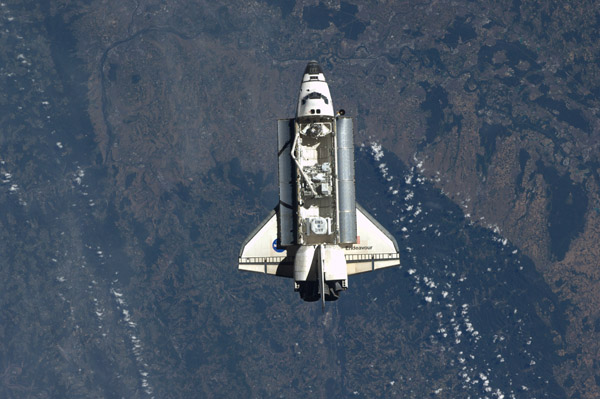 After the flip and hundreds of pictures, Commander Mark Kelly guided Endeavour in front of us to slowly back-in for docking. As I mentioned in my last post, during the docking Dima and I were at the controls of the U.S. and Russian motion control systems.  This was to ensure that the Space Station stopped controlling attitude at the moment of docking in order to accomplish a safe docking.
After docking, we still had a couple of hours of work to do before we could open the hatch and say hello to our visitors. After the pressure between the Shuttle and the Station was equalized and all checks were complete, Paolo and I opened the forward facing hatch of the Harmony Module and greeted the crew of STS-134.
After some quick hellos, Dima gave the Shuttle crew an initial safety briefing before taking the crew on a tour of the Station, pointing out the location of safety equipment to be used in the case of an emergency onboard. 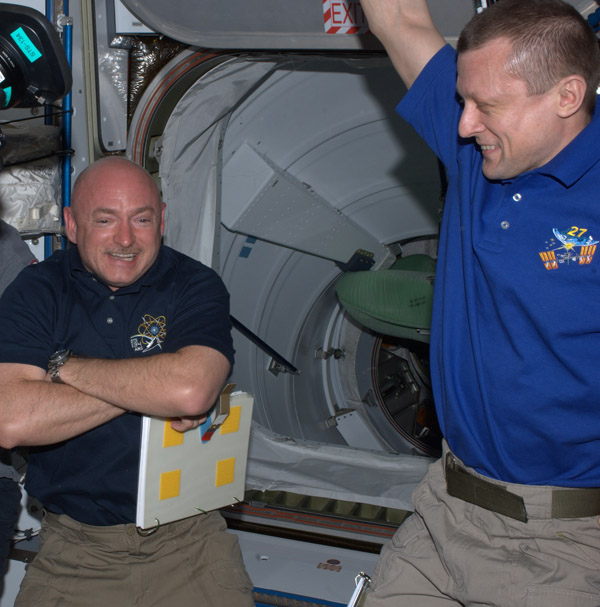 Space Shuttle Commander Mark Kelly and Space Station Commander Dmitry Kondratiev
Hurricane Endeavour
A Space Shuttle mission has been described as a sprint in comparison to the marathon pace of a six-month Space Station mission. That difference was apparent as soon as the hatch was opened, and the two-week flurry of activity began in earnest.
At any given moment, crewmembers could be found operating the Space Station’s robotic arm from the cupola, while others were operating the Space Shuttle’s robotic arm. Crew were loading and unloading cargo, repairing Space Station systems, conducting media interviews, conducting scientific experiments, or working outside in the vacuum of space to put the finishing touches on Space Station construction. I don’t think there was a time during the docked mission when someone was not in motion from one part of the Space Station to another.
An Easy Commute to Work
It is very interesting to see people first arrive onboard the space station. Even though crews have a couple of days to get reacquainted with the experience of being in space, entering the relatively wide open spaces of the Station requires a whole new adjustment period. In the confines of the Space Shuttle or the Soyuz, you’re never more than a few inches from something to hold on to. To move around on these spacecraft, you simply move hand over hand, grabbing on to whatever is “handy”. On the Space Station, we move from one place to another by flying. You simply push off with your feet like Superman and fly in any direction you desire. 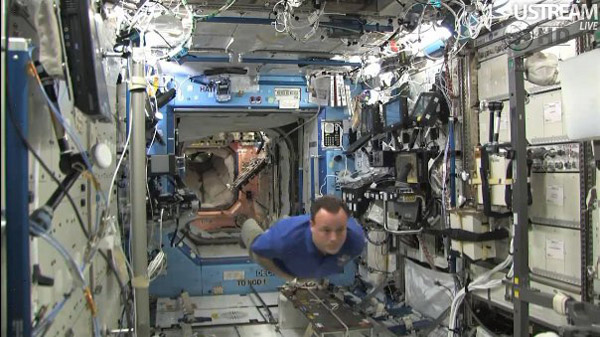 This new freedom does take some time to get used to, and it takes some time to master. It’s very entertaining to watch others get their “wings” as I’m sure I was amusing to watch upon my arrival. Eventually all the precision moves of an Olympic gymnast on a gold medal dismount find their way into an acrobatic routine.  Moving large objects around the Space Station is especially interesting. It’s always fun to give massive objects a nudge in the direction you want them to move, and then simply hold on as their large mass drags you along like hitching a ride on the back of a dolphin. Of course you can’t forget you’re also responsible for the brakes too!
I’m going to close here for now, but to whet you appetite for future installments of Endeavor’s visit, here’s a list of the topics I plan to write  about: