Skip to content
For more information, please visit http://www.FragileOasis.org.
Welcome to “Three Ships Pass in the Night” Part III, the story of the Space Shuttle Endeavour’s visit to the International Space Station through a series of short recollections:
Farewells
The “Three Ships” refer to the International Space Station, the docking and undocking of Space Shuttle Endeavour and the undocking of the Soyuz TMA-20 spacecraft that returned Dmitry Kondratyev, Cady Coleman, and Paolo Nespoli to Earth.
After spending almost two months in space with Dima, Cady and Paolo, I was sad to see them leave. They spent a great deal of time getting me up to speed on all the procedures, systems and life in general aboard the Space Station. They all did a great job during their six months up here. 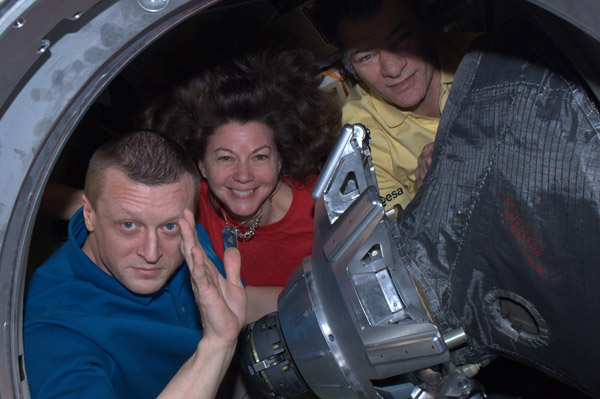 “@Astro_Ron: Yesterday just before Dima @Astro_Paolo + @Astro_Cady closed the hatch on their Soyuz ride home #FromSpace”
Tweeted 24 May 2011
On the day of the Soyuz undocking, the combined Space Station and Space Shuttle crews were on a split sleep schedule. The Shuttle crew and I were on one sleep schedule, and the rest of the Station crew on another.
I was supposed to be asleep before we closed the Soyuz-ISS hatches. Instead, I stayed awake to say goodbye to our friends at hatch closing, planning to go to sleep before undocking. An alarm on the Station changed that plan.
Shortly after I went to bed, a minor alarm woke me up. This led to a couple of hours of work, bringing the time very close to undocking. Since I was up anyway, I watched the undocking and fly around of the Soyuz.
It was decided that after undocking the Soyuz would back away from the Space Station and then the Station would slowly rotate to provide different backdrops for an historic photo shoot of the Space Shuttle Endeavour docked to the Space Station. This also gave me the opportunity to take pictures of the Soyuz as it backed away.
I’m very happy Dima, Cady and Paolo had a safe landing in Kazakhstan and that they’re all back with their families. I’m saving the Shuttle farewell story for a future installment called “Storm in the Milky Way.” 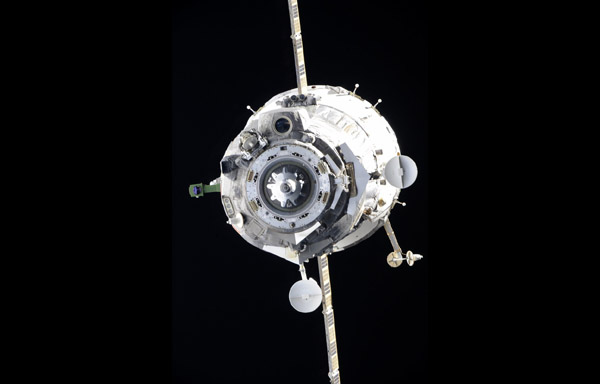 “@Astro_Ron: On their way home @Astro_Paolo is in the Soyuz window taking historic pics of the #ISS + #Endeavour #FromSpace”
Tweeted 24 May 2011
Bumps and Bangs and the Wayward Bolt
During Endeavour’s mission, the STS-134 crew conducted four spacewalks. Shuttle Commander Mark Kelly and I were responsible for getting the guys in their spacesuits, carrying out the methodical and involved process of getting them safely out the door for each one.
After each spacewalk began, I went about other activities and responsibilities until the guys were ready to come back inside. Normally, a spacewalk lasts anywhere from 5 to 8 hours, so I had some time to get some great pictures of the guys outside from the cupola, and occasionally from the nadir docked Soyuz. 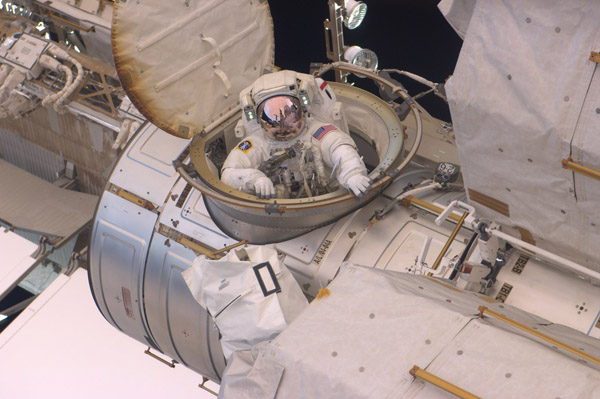 “@Astro_Ron: Drew Feustel coming back inside today #FromSpace after a hard day at the office Px taken from the 25S Soyuz”
Tweeted 20 May 2011
During breaks in the action, I would fly into my crew quarters and send out a picture or two of the spacewalkers via Twitter. It was really strange to be in my crew quarters sending a picture out of two guys out in the vacuum of space while I could hear them banging and clunking around outside the Space Station. It reminded me of trying to do work at home on Earth while construction was going on next door. 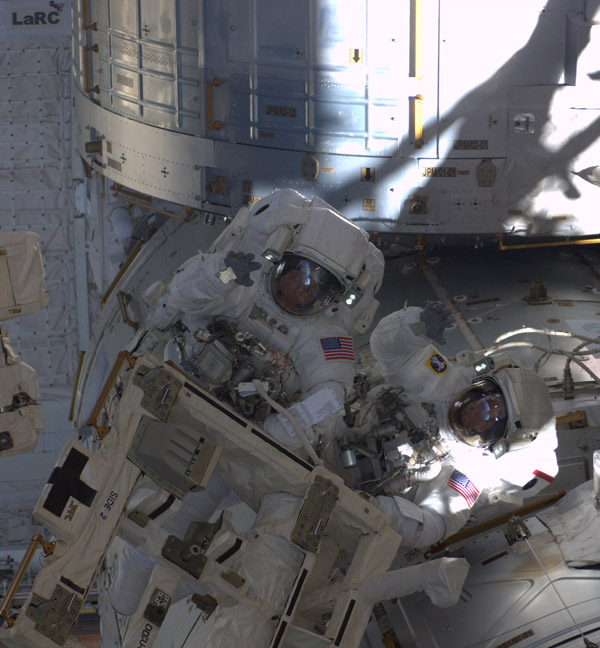 “@Astro_Ron: #FromSpace : Drew @AstroIronMike from the cupola #highaltitudeconstruction”
Tweeted 25 May 2011
During the spacewalk, a bolt that Mike Fincke was loosening with the very high tech Pistol Grip Tool (PGT) broke off and floated away. Mark Kelly and I went to the cupola, and sure enough, we could see a shiny new satellite tumbling away toward the Earth’s horizon. We took pictures and video of it to help Mission Control determine the bolt’s trajectory and whether or not it would pose a threat to the Space Station. It didn’t. 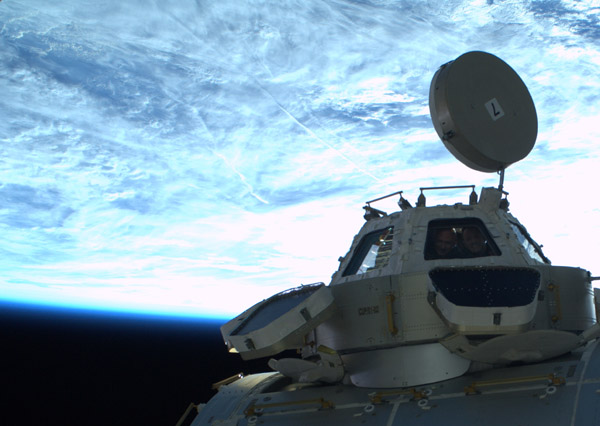 “@Astro_Ron: @ShuttleCDRKelly + I sitting on top of the world – px taken by @AstroIronMike while out in the vacuum of space”
Tweeted 26 May 2011
The Pope
During Endeavour’s mission, we were honored to speak live with Pope Benedict XVI from the Vatican. The Pope had some prepared words for us, and he asked some questions.
Pope Benedict XVI asked me:
“One of the things you have discussed concerns a responsibility we all have toward the future of our planet. I recall the serious risks facing the environment and the survival of future generations. Scientists tell us we have to be careful and from an ethical point of view, we must develop our conscience as well. From your extraordinary observation point how do you see the situation on Earth? Do you see signs of phenomena to which we need to be more attentive?”
Transcript of my answer:
“Your Holiness it is a great honor to speak with you. You’re right, it really is an extraordinary vantage point we have up here. On the one hand, we can see how indescribably beautiful the planet we have been given is. but on the other hand, we can clearly see how fragile it is. The atmosphere. for instance, when viewed from space looks paper-thin, and to think that this paper-thin layer is all that separates every living thing on our planet from the vacuum of space and is all that protects us, is really a sobering thought. You really have a sense here as you look down at our planet hanging in the blackness of space, that we are all on this together; riding on this beautiful, fragile oasis through the universe. It really fills us with a lot of hope to think that all of us on board this incredible orbiting Space Station, that was built by the many nations of our international partnership — to accomplish this tremendous feat in orbit shows that by working together and cooperating — we can solve many of the problems facing our planet, and overcome many of the challenges that face the inhabitants of our planet. It really is a wonderful place to live and work and it is a wonderful place to view our beautiful Earth.”
I’m going to break for now. Hopefully the next installment of Endeavour’s visit to the International Space Station will include my first video blog (I think it will be the first video blog from space). The remaining topics on this post are: