Last week, Andrey Borisenko, Sasha Samokutyaev and I were given a wonderful welcome at the Yuri Gagarin Cosmonaut Training Center in Star City, just outside of Moscow.
Our day began with an official debriefing of our mission to the International Space Station that began with a launch aboard a Soyuz spacecraft on April 4, 2011, followed by docking to the ISS two days later.  The mission’s accomplishments were discussed, and the heads of various departments gave an overview of the mission’s events. Andrey, Sasha and I also had the opportunity to say a few words.
After the debrief, the three of us were escorted outside the gates of the Training Center where we were greeted by several hundred people as we placed flowers at the base of the majestic statue of Yuri Gagarin, the first human in space. We had come full circle – just prior to our mission, Andrey, Sasha and I paid our respects at Gagarin’s tomb, and then a few weeks later, strapped ourselves into a rocket bearing his likeness and his name, honoring his pioneering flight fifty years earlier. 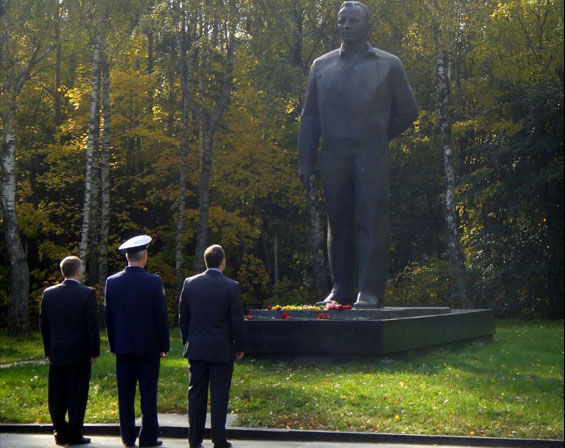 Andrey, Sasha and I sharing a quiet moment at the statue honoring Yuri Gagarin outside the Cosmonaut Training Center on a beautiful fall day in Star City Russia
A marching band led us back inside the training complex for the public welcome ceremony – with hundreds of well wishers, Russian military officers and cosmonauts in formation, many of the instructors, technicians and support personnel who were directly involved in our mission, and who contributed to its success – all lining the route.
At the public ceremony, the heads of many different organizations took the podium, recounted the successes of the mission and presented us with gifts and bouquets of flowers. Again each of us had the opportunity to say a few words. I thanked the Russian Space Agency, Star City instructors and the public for their great support during the mission, and praised the talent and professionalism of my Russian crewmates. One of the things I stressed was how impressed I was by the fact that from the moment we arrived in orbit, Andrey and Sasha performed as seasoned space veterans even though this was their first spaceflight.
After the public ceremony, a reception was held in the facility where the cosmonauts live during their rehabilitation after space flight. Leaders of the Russian Space program, local dignitaries, family members of the crew, and veteran cosmonauts each took turns toasting the success of the mission.
Words cannot describe how wonderful it was to hear all the heartfelt words of congratulations and support. What an amazing thing it is to be able to toast the accomplishments of the many nations of our international partnership. Many of those present commented on what a great example of cooperation our international space program has become. I agree, and hope that we use this example of cooperation to overcome the challenges facing the inhabitants of our beautiful planet.
As the reception ended, it was time to say goodbye to the crewmates with whom I trained for two and a half years, then lived and worked with for nearly six months onboard the International Space Station. It was a bittersweet moment. This goodbye meant the official end to our mission.
Andrey, Sasha and I and our families have become very close. We share a special bond forged from a unique experience – one which can’t help but to bring people closer together in common appreciation of the privilege we had to live and work in space, and the common appreciation of our wonderful planet Earth.