Saying goodbye to our friends and our home on the International Space Station was bittersweet after nearly six months in space. Although Andrey Borisenko, Alexander Samokutyaev and I were eager to return to our beautiful Earth, we wanted to savor our last moments as we took a couple of laps around our Fragile Oasis before coming back down. Today, November 21, 2011, we look forward to welcoming our crewmates Mike Fossum, Sergei Volkov and Satoshi Furukawa as they come “Down to Earth” after their half year onboard the International Space Station. God Speed & Welcome Home Guys! Thank you Peter Gabriel for allowing your music to accompany all of us. Perfect!
About This Video
Time-lapse video like this one is about as close as we can come to show what astronauts see in space.  Here’s how this came about.
About six weeks before my return to Earth from the International Space Station, I received an Email from Katrina Willoughby, who is one of our photography instructors. She suggested giving time-lapse photography a try. I hadn’t tried time-lapse yet because I overestimated how hard it would be to capture great images, and the time-lapse photography I had seen to date didn’t seem as impressive as the still imagery we had been taking with some of the new equipment onboard.
A day or two after receiving Katrina’s email, I set up a Nikon D3S camera in the cupola (our windowed observatory onboard the ISS). I took some practice shots, playing with the camera settings until things looked about right. I then set up the camera to take about 500 pictures at 3-second intervals (more details about the camera settings are below). When I saw the results, I was so excited that I couldn’t sleep!
I quickly loaded the pictures on the computer in my crew quarters and stitched together a time-lapse video.  As I was doing this, Peter Gabriel’s song “Down to Earth” popped into my head, and I threw the first part of the audio track on to the video. Peter’s music was on my playlist.
I posted the video to my blog on August 26th – “Sneak Peek From Space” It is this sequence – Europe to the Indian Ocean – that opens the time lapse part of the video embedded here at 1:06.
The next morning, I gathered my crewmates together and played the time-lapse video while explaining how simple it was to stitch it all together. All of my crewmates experimented with this medium to capture the space experience, especially Mike Fossum, who has since elevated time-lapse photography from space to an art form. All the sequences for this video were shot by either Mike or me.
Although the International Space Station travels at 17,500mph, orbiting the Earth every 90 minutes, time-lapse photography speeds up our apparent motion considerably.
The flashes of light you see throughout the video is lightning captured by the individual frames of the photography. Yet, only a small percentage of the actual lightning is captured in the imagery. While the video is sped up, I think it still accurately captures the paparazzi-look of lightening storms as we see them from space.
While still onboard the ISS, Peter Gabriel and I brainstormed some ideas for using this type of imagery to help tell the Fragile Oasis story. The possibilities are truly exciting, and I can’t wait to see where this leads. I hope it will help people follow our missions not as spectators, but as fellow crewmembers, inspired to help improve life on our planet.
Camera Information
Night sequences were shot exclusively using the  Nikon D3s, usually with a wide angle lens.  The camera was set up to take pictures, commonly at three second intervals, generally resulting in a fairly “smooth” video.
Both focus and exposure were set manually. When the camera was allowed to expose automatically, it would change the exposure between shots, resulting in uneven lighting through the video.  ISO would be set near 10000 or higher. Shutter speeds were as low as 1 second, but often longer.  Aperture was wide open.  For the 17-35mm lens this was f/2.8.
Day sequences were shot with either the D3S or the D2XS. Wide-angle lenses were normally used.  The Nikon 17-35mm lens was often used near the wide end, such as 17mm. This showed the curvature of the Earth. 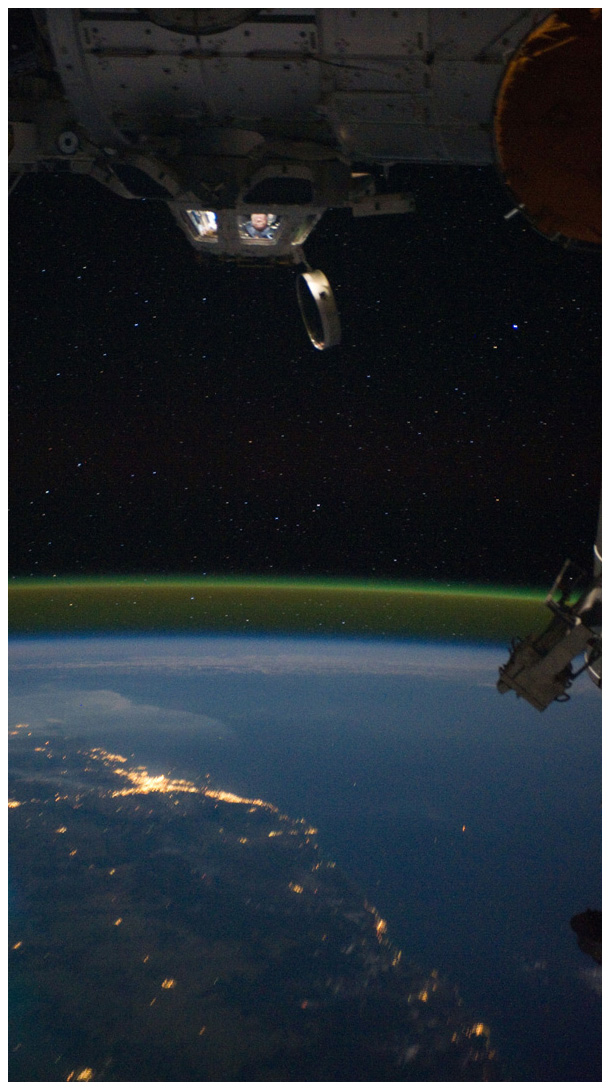