There were no weather constraints at the time of rocket liftoff.

“It was a chamber of commerce day,” said NASA Launch Director Tim Dunn. “We’ve been working on GOES-S for about 15 months. This is a huge year for the Launch Services Program.”

GOES-S separated from the United Launch Alliance Centaur upper stage at 8:34 p.m. EST, followed shortly afterward by mission manager confirmation that the spacecraft’s Stage 1 solar array successfully deployed and the spacecraft was operating on its own power.

When it reaches geostationary orbit 22,300 miles above Earth, in approximately two weeks, it will be renamed GOES-17. It is the second in the GOES-R Series of weather satellites that includes GOES-16 (formerly GOES-R), along with -S, -T and -U. When the satellite is declared operational, late this year, it will occupy NOAA’s GOES-West position and provide faster, more accurate data for tracking wildfires, tropical cyclones, fog and other storm systems and hazards that threaten the western United States, including Hawaii and Alaska, Mexico, Central America and the Pacific Ocean, all the way to New Zealand. More information about NOAA’s GOES satellites is available at https://www.nasa.gov/content/goes.

NOAA manages the GOES-R Series program through an integrated NOAA/NASA office at NASA’s Goddard Space Flight Center in Greenbelt, Maryland. NASA also oversees the acquisition of the spacecraft, instruments and launch vehicles. Lockheed Martin Space of Littleton, Colorado, built the spacecraft and is responsible for spacecraft development, integration and testing.

This concludes today’s coverage of the GOES-S countdown, launch and ascent into space.

The GOES-S satellite completed deployment of the Stage 1 solar array that will generate electricity for the spacecraft during its mission. GOES-S is in a geosynchronous transfer orbit above the Earth, its systems are in good health and it is operating on its own.

We have spacecraft separation. Cheers and applause can be heard from the launch teams as the GOES-S spacecraft separates from the United Launch Alliance Centaur upper stage to fly freely for the first time. Next up is solar array deployment. GOES-S currently is in a geosynchronous transfer orbit above the Earth.

The Centaur stage of a United Launch Alliance Atlas V rocket is firing its small thrusters to position itself and the GOES-S payload into the proper position to fire its main engine for the final time during the mission.  NASA TV will resume coverage at 8:15 p.m. EST. Spacecraft separation is set to occur at approximately 8:31:55 p.m.

To view on the agency’s website go to http://www.nasa.gov/live

For more information on the mission, visit:  http://www.nasa.gov/goes

The Centaur stage is firing its small thrusters to position itself and the GOES-S payload into the proper position to fire its main engine for the final time during the mission. Everything remains on schedule for the flight. 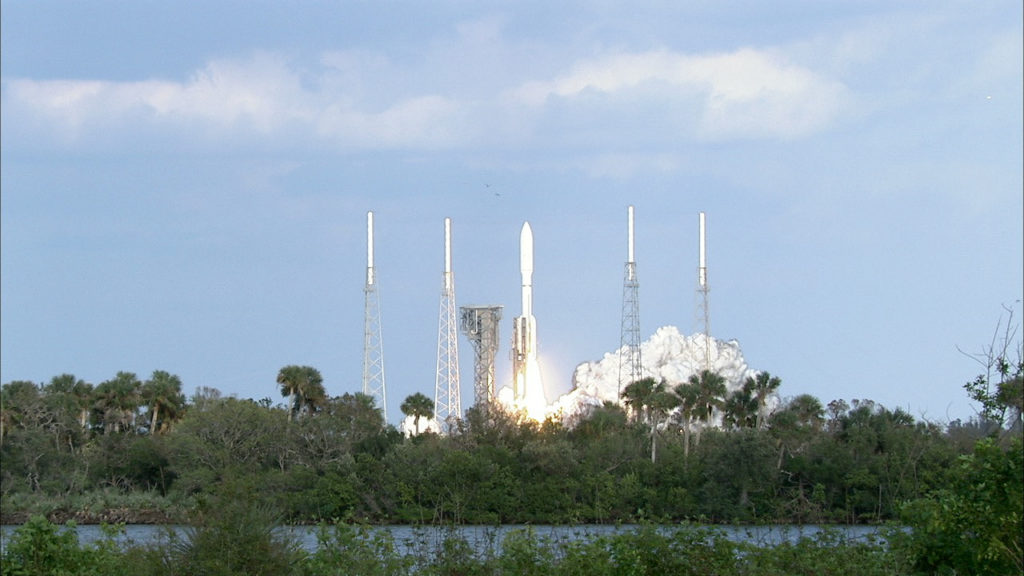 About four minutes into flight, a series of key events occurs in rapid succession: Atlas booster engine cutoff, separation of the booster from the Centaur upper stage, ignition of the Centaur main engine for its first of two burns, then jettison of the payload fairing.

The GOES-S countdown is underway toward a liftoff at 5:02 p.m. EST. During the last four minutes of the countdown, the Atlas and Centaur propellant tanks will be brought up to flight pressure, the rocket and spacecraft will be confirmed on internal power, and the Eastern Range and launch managers will perform final status checks. A computerized autosequencer will take over the countdown in order to conduct a host of activities in precise order.

The launch countdown has entered a T-4 minute hold. This hold will last 15 minutes. Weather remains at 90 percent chance for favorable weather at liftoff. The constraint for cumulus clouds has been removed.

The weather forecast for today’s launch is now at a 90 percent chance for favorable weather at liftoff.

The launch blog originates from the NASA News Center here at Kennedy, a few miles west of the launch complex. There’s more to come, so stay with us.