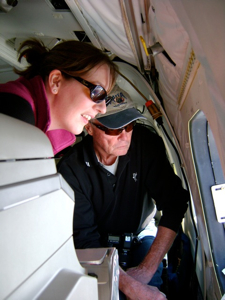 Our internal body clocks are becoming accustomed to the early morning routine here in Punta Arenas, Chile, as we prepare for the daily mission brief and weather report before take-off. I woke up early this morning, 5:30 a.m., 20 minutes ahead of my alarm; those who know me well will tell you that’s a minor miracle! Not known for being a “morning person” I was excited today with the possibility of a 3rd sea ice flight, the last of our highest priority sea ice missions. Even the piped music during breakfast at our hotel seemed to be up beat and themed for flying!

Sinead Farrell and John Arvesen enjoy the view of the ice pack from the NASA DC-8. Photo courtesy of James Yungel.

Around 7:55 a.m. the news from the weather briefing appeared good, and we received word that today’s sea ice flight was a “go.” The weather forecast today is such that we expect some pockets of low cloud at a couple of locations along our target flight lines. Low clouds are worrisome since they restrict the retrieval of laser altimetry data, which impacts the science return of the sea ice data set. However, the team, who has seen this all before, has a few tricks up the sleeves of their flight suits! We’ll try to beat these weather systems by flying our route in a counter clockwise direction … hoping to survey the more southwesterly Amundsen Sea first and the Bellingshausen Sea later in the flight.

Today’s flight line to the west of the Antarctic Peninsula has also undergone a number of iterations. Unlike flying over the more stationary ice sheets and glaciers, sea ice is dynamic, and drifts easily under the influence of waves and wind. Even the best-laid plans often need to be altered and updated at the 11th hour, based on current conditions. The recent low-pressure systems to the west of the Antarctic Peninsula have conspired to push much of the sea ice out of the eastern Bellingshausen Sea further west into the Amundsen Sea. Originally we had planned to survey sea ice in the eastern Bellingshausen to the north and west of Alexander Island. One of our science objectives for this flight is to support our colleagues at the British Antarctic Survey (BAS) and their “IceBell” mission. The BAS team is currently on passage to South Georgia aboard the RSS James Clark Ross and they expect to reach the Bellingshausen Sea sometime around mid November.

Map of Flight Line for October 30, 2010 over the Bellingshausen and Amundsen Seas. Map courtesy of Michael Studinger.

However, given the extent of open water north of Alexander Island (see map, above) we have removed flight lines in that area and focus now on surveying the Bellingshausen to the west of Alexander Island (way-points 102n, 103n, and 104n, indicated on the map). This new plan also has the advantage of giving us extra time to sample the Amundsen Sea and repeat much of the 2009 survey. In this way we begin to build a time series of sea ice measurements over many years, which provides the data we need to look at both the interannual variability of sea ice thickness, and assess any longer term trends in the overall volume of the ice pack.

After a transit of two short hours, we reach the beginning of our survey line. Unfortunately the local weather is much worse than both the weather models and forecasts predicted. The thick, low cloud base, visible in all directions, seems to be part of a system moving faster than forecast. A moment of hope appears when a section of consolidated sea ice with long narrow leads appears beneath a break in the clouds … but hope is short lived when the clouds condense once again in all directions.

After about an hour of nervously peering through the windows on the aircraft, the decision is made to descend to a lower altitude. We’ll try to get beneath the cloud deck and switch from the high altitude Land Vegetation and Ice Sensor (LVIS) laser altimeter to the low altitude Airborne Topographic Mapper (ATM) laser system. An anxious 15 minutes pass as we descend from 35,000 feet to 1,500 feet, but suddenly we’re below the cloud deck, the ice pack appears, and there’s much cheering and clapping aboard the DC-8! 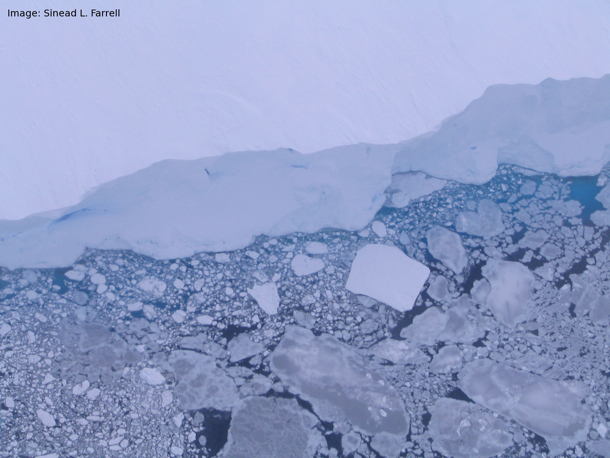 The transit through the Amundsen Sea was busy. Small pockets of light cloud and haze appeared between the aircraft and the sea ice surface. The DC-8 pilots descended to lower altitudes ducking below the cloud deck for short periods to maximize the conditions for good data collection, before returning to the normal operating altitude of 1,500 ft. The trip though the eastern Amundsen Sea and the southern Bellingshausen was exciting; the scenery changed from thin new grey ice forming in coastal polynyas, to thicker consolidated sea ice topped with thick snow and sastrugi, intermingled with pyramidal icebergs. As a geophysicist specializing in sea ice, the long flight hours pass quickly for me as the sea ice constantly entertains with it’s ever-changing geometrical patterns of ridges, floes and leads.

Slight anxiety during the earlier part of today’s mission was finally superseded by perfect weather in the south-western Bellingshausen Sea along our route west of Alexander Island. We look forward to comparing the data collected in this region with the complementary in situ data to be collected by our colleagues on the BAS IceBell mission. A bittersweet feeling prevails as we approach the sea ice edge and cross the final few ice floes … delight in having successfully completed three high priority sea ice missions within five days, but melancholy at the thought of seeing the last of the sea ice for 2010. Ultimately these mixed emotions pass, and excitement returns with thoughts of learning what secrets our new data hold and hopes for the next IceBridge sea ice flights in Spring 2011.