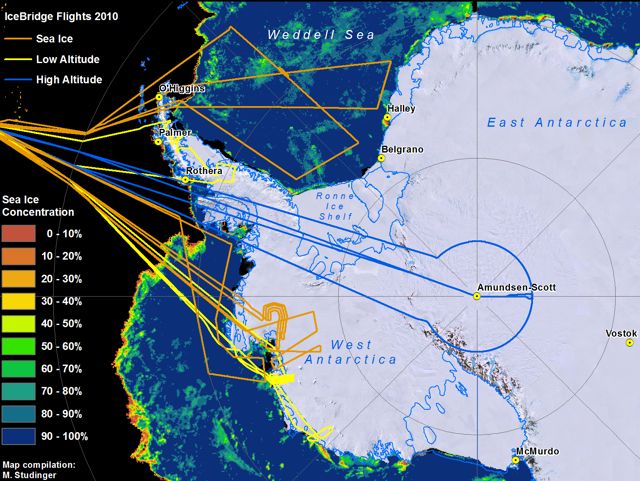 A compilation of flight lines shows the paths of all 10 flights flown during Operation IceBridge’s Antarctic 2010 campaign. Credit: Michael Studinger

SANTIAGO, Chile — For the first time in six weeks the nose of the DC-8 is pointing north today after taking off from Punta Arenas airport. Instead of heading south on our familiar flight path to Antarctica over snow capped mountains that soon mark the last land before the windswept Southern Ocean, we are heading north towards Santiago, where we will stay overnight and continue on to Palmdale, California on the next day. We have completed our science flights over Antarctica and are heading home. 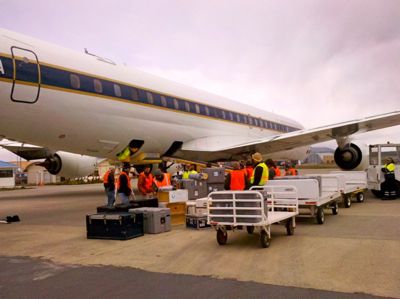 We had a very successful campaign and accomplished many things although it was challenging at times. Worse than normal weather over the Antarctic Peninsula and Marie Byrd Land and aircraft downtimes slowed down our progress during the deployment. By adapting our plans to the situation we were able to fly 10 successful missions making use of 84% of the allocated science flight hours. The IceBridge teams have spent 115 hours in the air collecting data and have flown 40,098 nautical miles, almost twice around the Earth. We collected landmark sea ice data sets in the Weddell, Bellingshausen and Amundsen Seas. We have now flown over every ICESat orbit ever flown by completing an arc at 86°S, the inflection point of all ICESat orbits around the South Pole. We have surveyed many glaciers along the Antarctic Peninsula, the Pine Island Glacier area and in Marie Byrd Land. We have collected data along a sea ice transit at the same time ESA’s CryoSat-2 satellite flew overhead allowing us to calibrate and validate the satellite measurements.

We are fortunate to have the best equipment and tools for our research. The NASA DC-8 aircraft is ideally suited for our challenging missions in an extreme environment. The science instruments on the aircraft are cutting edge with unique capabilities. But it is the people of IceBridge that make the success of IceBridge, not the instruments or the aircraft. I would like to thank everyone involved in this campaign, at home or in the field, who with their dedication, experience, and skills make IceBridge a success. We also depend on many people and organizations who support our missions. The list is long but the following deserve a special thank you: our Chilean friends from the Centro de Estudios Científicos, the personnel of the Dirección General de Aeronáutica Civil at the Punta Arenas airport, the Armada de Chile, the Universidad de Magallanes, the U.S. Embassy in Santiago, the CryoSat-2 teams from the European Space Agency, the National Science Foundation’s Office of Polar Programs, the British Antarctic Survey, UNAVCO, the AMPS weather forecast team, and last but not least the staff at the hotel Diego de Almagro in Punta Arenas. Thank you all!

We are looking forward to returning to Punta Arenas next year for another IceBridge campaign over Antarctica. Meanwhile check this blog for our upcoming campaign over Greenland and the Arctic Ocean with NASA’s P-3B aircraft in March 2011.

One thought on “Operation IceBridge Completes Another Successful Antarctic Campaign”