66° 33’ N, 179° 85’ W, June 18 — Friday night, the following pipe reverberated throughout the Healy: “Now attention all hands. The cutter Healy has crossed into the Arctic Circle — the cold, icy waters of King Neptune. Welcome home, Polar Bears. All Blue Noses beware! That is all.”

“Polar Bears” are those who have already crossed the Arctic Circle and gone through initiation. “Blue Noses,” on the other hand, have some surprises waiting for them. Everyone’s wondering what the secret initiation will be, including Blue Nose chief scientist Kevin Arrigo.

Immediately after the announcement, a crowd of scientists and Coasties gathered at the bow as the Healy passed through a belt of sea ice and herds of walruses. For many, it was the first sighting of both — a truly surreal night to remember. 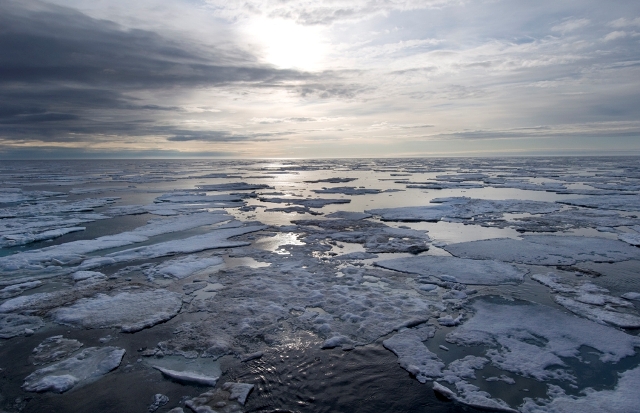 “This is what I’ve been waiting for!” said Cedric Fichot, a graduate student at the University of South Carolina. (Photo by Haley Smith Kingsland) 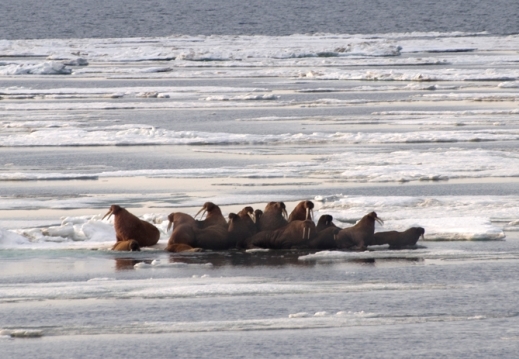 The walrus’ scientific name, Odobenus rosmarus, means “tooth-walking sea horse” in Latin. Walrus tusks are really extended upper canine teeth that lengthen with age— up to three feet during a walrus’ lifetime. Walruses live on the sea ice edge over shallow continental shelves, and use their tusks to hoist themselves onto the ice and bore holes in it. Males also employ their tusks to threaten rivals. Walrus’ whiskers, or vibrissae, help them nuzzle and forage for shellfish on the shallow sea floor. How will climate change affect these gargantuan creatures? As Arctic sea ice melts and retreats from shallow continental shelves, walruses lose their habitat to water that’s too deep for them to dive for less abundant food. So instead they “haul out” to rest on coastal lands, and over-congregation leads to stampedes and trampling of young calves as well as stiff competition for limited resources. (Photo by Haley Smith Kingsland)

United States Geological Survey scientists have been tracking walruses with satellite radio-tags in order to trace their movements in the changing sea ice habitat. You can follow animations of the walrus’ paths in both the Chukchi and Bering Seas at <http://alaska.usgs.gov/science/biology/walrus/tracking.html>. (Photo by Haley Smith Kingsland)