“I enjoy walking through the labs while they are full of activity. Without the science party on board, they are empty. Now, the lab benches are full of computers, bottles, beakers, funnels, and test tubes, and look like a science fair without the posters describing what’s what.” —Captain William Rall

Scientists work in more than 5000 square feet of science labs and support rooms on the Healy. There’s a large main science lab at the stern of the ship, two climate-controlled chambers, a few smaller laboratory spaces, and two docking stations for portable lab vans (twenty-foot cargo containers). In fact, “most of the work takes place in the labs,” says Jim Swift, a physical oceanographer from the Scripps Institution of Oceanography.

While science spaces within the Healy were under design in the 1990s, Jim chaired an oversight committee, the Arctic Icebreaker Coordinating Committee, to offer constructive suggestions. The committee advocated for as much science space as possible, as well as enough flexibility for scientists to customize their labs to their unique instruments and personal tastes.

“A research ship is an industrial environment. It’s not like a home or office,” Jim explains. “Everything is out where you can get to it rather than behind a wall.” He says the Healy’s flexibility “is considered almost perfect by scientists because they can configure their set-ups.” Lab benches are made with plywood that scientists can drill into, and there’s plenty of power, light, sinks, cableways, and hot and cold running water.

Full of bustle and late-shift dance parties, here are some pictures of the science labs with researchers hard at work inside. 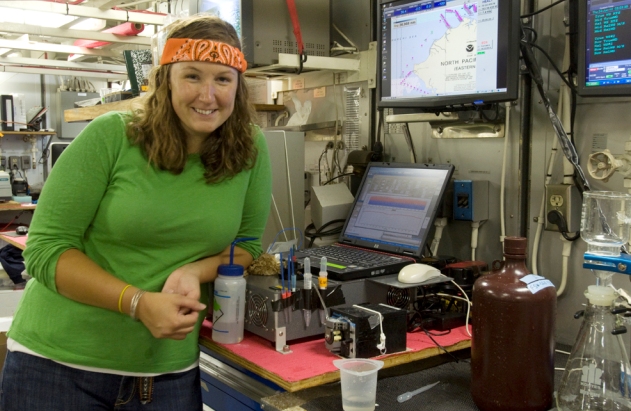 Molly Palmer, a graduate student at Stanford University, is experimenting with algae during her time aboard the Healy. She’s interested in carbon cycling and biological productivity in both the surface and deep Arctic Ocean, data that satellites can’t always capture. In a climate-controlled cold room on the Healy, Molly is determining how algal communities recover from light shock. Her studies will create a baseline of data to help scientists understand and predict algae’s response to less ice cover and greater sunlight in the Arctic due to global warming. 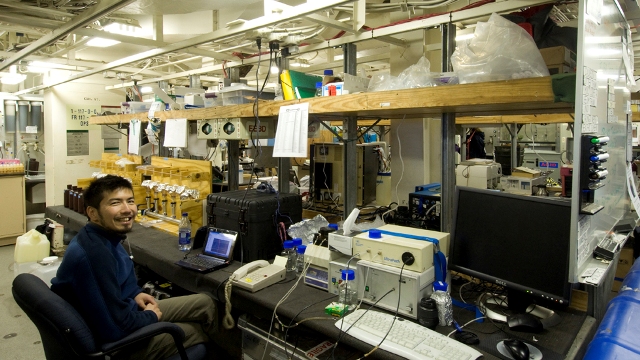 Scientists have processed many samples in the past week on the Healy and are already learning from the data they have collected. Here Shohei Watanabe, a graduate student at Universite Laval, is reviewing some of his data so that he can better design his future experiments for the next three weeks. 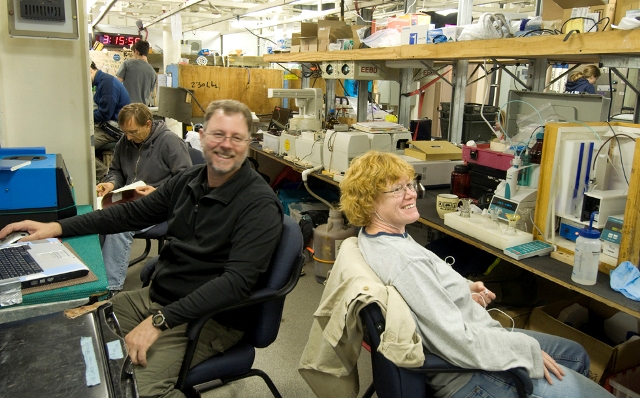 Rick Reynolds of the Scripps Institution of Oceanography shoots a laser beam at a particle in order to measure how the particle scatters light. Susan Becker, also from Scripps, is measuring the amount of dissolved oxygen in water samples. 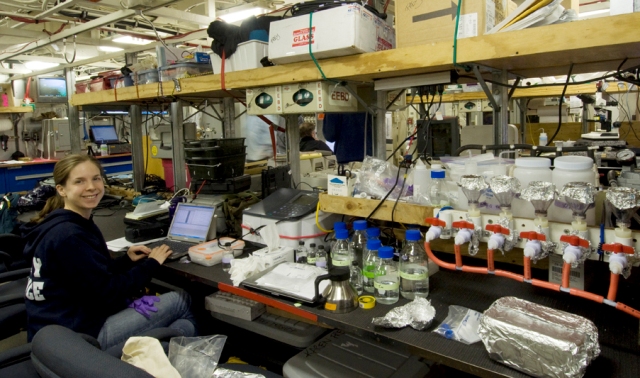 Christie Wood, a graduate student at Clark University, operates a machine that runs water samples from the ice stations in order to identify variations of dissolved organic matter throughout the ice and water column. 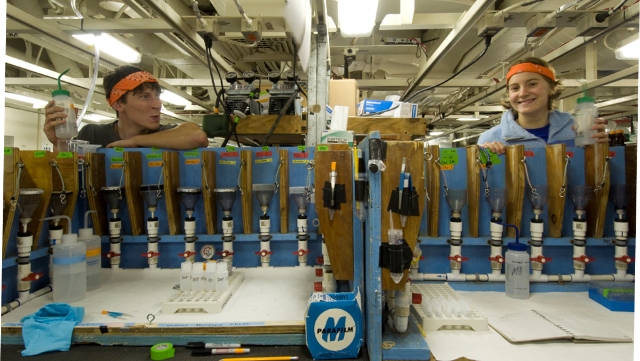 Kate Lowry and Zach Brown, graduate students at Stanford University, pose in front of their water filtration rack that allows two people to process 24 water samples at once. As soon as the CTD rosette rises from the ocean, Zach and Kate wait in line to fill carboys of seawater from its water sampling bottles. They run sub-samples from the carboys through this filtration rack to measure the amount of chlorophyll, carbon, and various nutrients in the seawater. “It gets really busy!” says Kate. “Especially if one person has to leave for another experiment and the other person has to watch all 24 filtrations at once!” 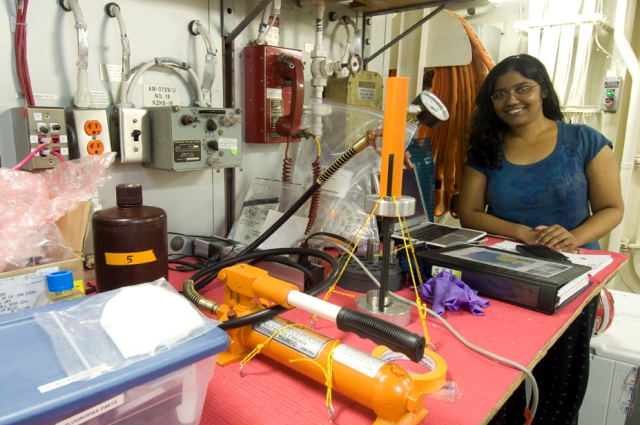 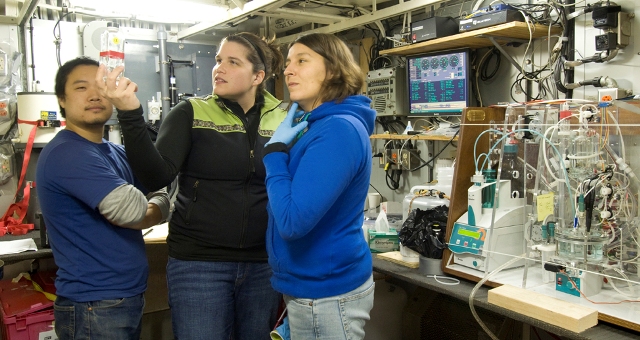 Mike Kong and Kristen Shake, graduate students at the University of Alaska-Fairbanks, and Marlene Jeffries of the Bermuda Institute of Ocean Sciences intently contemplate the Arctic uptake of carbon dioxide. They study inorganic carbon, or living particles, in the ocean. Here they’re standing near a VINDTA, a machine that helps calculate the amount of carbon dioxide in the surface ocean. 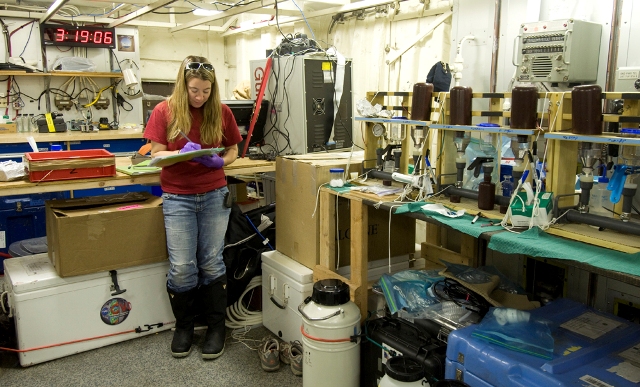 Aimee Neeley of NASA records crucial information in her sample log. Nearby, her water filtration setup takes measurements of the surface ocean to match with satellite data. Hopefully, her numbers will correspond with those of the satellites. Amy’s work differs from academic research in that she’s developing and refining scientific standards. “I really enjoy bringing the community together to converge on methods and protocols,” she says.

All photos by Haley Smith Kingsland.

2 thoughts on “Science Labs on the Icebreaker Healy”