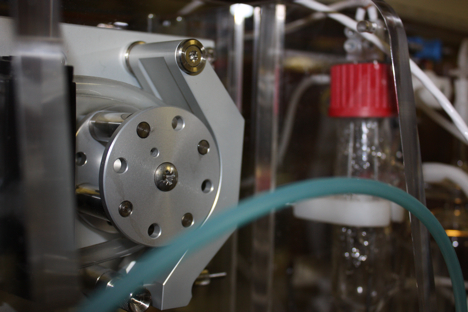 By day, scientists in the Healy’s main lab scurry to retrieve water samples and distribute them to vials and machines for testing. Even at night, when scientists speak in whispers among ship’s red-illuminated halls, the lab bustles with activity. To make the most of our time onboard, researchers work in shifts, day in and day out.

So what exactly does the lab sound like? After spending some time in the lab I noticed one sound rising above the rest …

The whirl and hum heard in the audio clip (above) comes from the pump on a machine called the VINDTA, or the “Versatile INstrument for the Determination of Total Alkalinity.”

The machine tests a sample of ocean water to determine its alkalinity – where it falls on the scale from acidic to basic. A sister machine, AIRICA (not heard) measures the dissolved inorganic carbon, from which scientists can measure carbon dioxide in the surface water.

As the ocean absorbs carbon dioxide from the atmosphere, the ocean becomes more acidic. Scientists want to find out to what extent acidification is happening the Arctic Ocean, and how it’s impacting the region’s ecosystem. 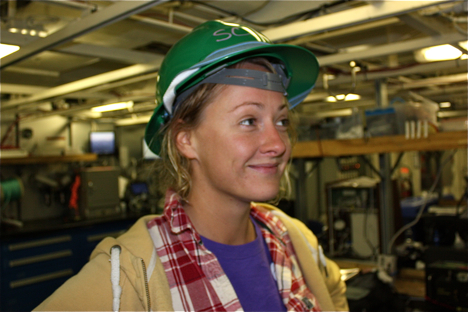 Becky Garley, of the Bermuda Institute of Ocean Sciences, is onboard the Healy operating VINDTA and AIRICA and describes why the measurements matter.

In contrast to what some scientists expected, last year’s data from ICESCAPE showed that the surface ocean was indeed absorbing more carbon dioxide.

“That’s going to have an effect on a lot of the organisms, especially the little guys who make their shells out of calcium carbonate, like corals and a lot of plankton,” Garley said. “There are a lot of big fish that like to chow down on those little guys … if they find it hard where are the fish going to go, what are they going to eat?”