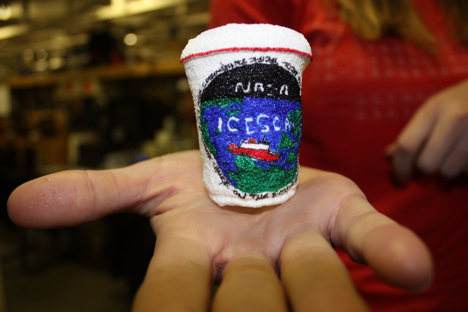 The Healy cruised northeast in the Chukchi Sea this morning, out of the continental shelf’s shallow water and into the Canada Basin’s deep-water abyss. Over the course of the day we went from sailing in water just 60 meters deep to more than 2,000 meters deep. 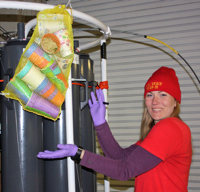 The crossing called for celebration. A common pastime at sea involves deep-water physics and Styrofoam products — usually cups and sometimes heads (the kind used for displaying wigs). Even resourceful ICESCAPE scientists couldn’t turn up any heads, so they adorned cups with commemorative statistics, colorful logos and Arctic icons.

Securely fastened to the frame of the CTD/Rosette instrument, the cups hitched a ride down to a depth of 2,100 meters where the massive pressure crushed them to about a quarter the size of the original.

It turns out that scientists saw a striking phenomenon today at the shelf’s edge. Read the Tech Tuesday post tomorrow to find out what we saw, and for a look at the technology that gave us eyes into the deep. 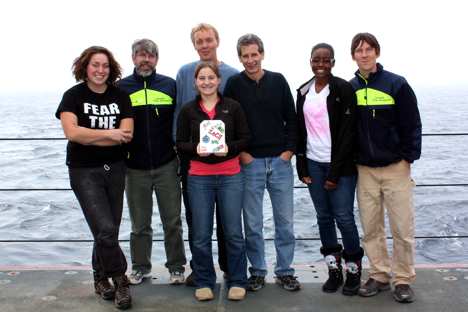 The group of ICESCAPE scientists from Stanford University, led by Kevin Arrigo, displays their Styrofoam plaque before it received a pressure treatment from the ocean. Credit: NASA/Kathryn Hansen