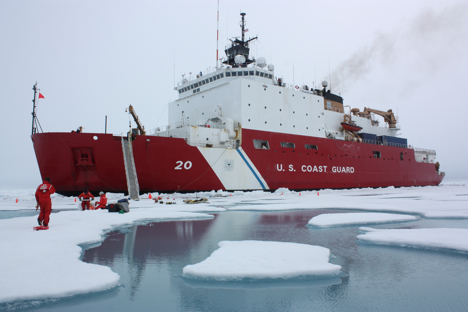 ICESCAPE: How did you get to work on the Healy?

Brittle: I grew up with a love of history, a love of the sea. My father worked in the ship industry and I always had a nautical fascination. I got an environmental science degree and then weighed my options. I decided I could be a marine science technician and hopefully get to be on one of the polar class icebreakers and do science. I’ve been fortunate. It’s a special opportunity for the small bunch that gets to interact with the science community and have our hands in the field.

I used to work on the Polar Star, then the Polar Sea and now the Healy. But you never forget your first love. I have a special affection for the Star, but this was the natural step up: increased capability, more science, and the Arctic is a hot topic right now.

ICESCAPE: How did the U.S Coast Guard get started icebreaking?

Brittle: The Coast Guard’s predecessor — the Revenue Marine or Revenue Cutter Service — sailed the U.S. Revenue Cutter Lincoln to survey Alaska after its purchase in 1867. That started our involvement and from there it expanded. A couple other cutters up there were the Corwin, the Rush, the Thetis, and then the Bear, which was the most famous. The Bear, built in Scotland in 1874 as a sealer and whaler, was purchased by the United States and operated in Alaskan waters until 1926. 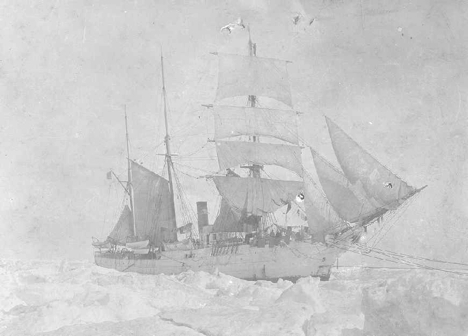 ICESCAPE: Why is the Bear famous?

Brittle: Captain Michael Healy, who this ship is named for, was the captain of the Bear. He was the sole U.S. government force in Alaska from a legal standpoint, search and rescue, and even dental — they had a doctor on board to provide service to the native Alaskans. He would act as a judge, protecting the seal hunt resources. There’s a quote that claims he was more known in Alaska than any president of the U.S. presidents because of his presence there for a number of years on the Bear. The Bear was a fixture.

The Bear and the others were wood vessels with some reinforcement on the bow to travel through ice. In 1927, the cutter Northland was constructed out of steel to replace the Bear and operated in Alaska until 1946. Then the Northland and other cutters were transferred to the Atlantic as part of neutrality patrol, or the Greenland patrol.

ICESCAPE: Can you give a brief history of the Coast Guard’s icebreaking fleet?

Brittle: As far as polar icebreakers go the next development was in the mid-1940s when they started constructing the Wind class. These were 269-foot cutters, and there were seven of those constructed that served into the late 1960s to early 1970s. A lot of the Winds were utilized to resupply remote locations including Thule Air Base in Greenland.

The winds were getting older so in 1954 they constructed the 310-foot Glacier for the Navy. For 16 consecutive years one of the Wind ships or the Glacier went to Antarctica for Operation Deep Freeze [regular missions to resupply Antarctic bases]. Ultimately the Wind class got worn out and they were decommissioned, and the need for new construction was realized.

The Polar Star and the Polar Sea came on line in the late 1970s. The thought was that one of the new ships could do what two or three of the Winds could do. That was the case for a number of years until 2001-2002 when the Polar Star and Polar Sea were called to break ice down in Antarctica. Iceberg B-15 was oriented in a way that kept the ice from clearing out, so they had to send both ships for a couple of years there until the Healy made its trip in 2002-2003 to assist the Polar Sea. After that congress transferred funding and the Antarctic job was contracted out, which freed up the Coast Guard ships.

Now, with Polar Sea decommissioned and the Polar Star in the yards undergoing a refit, the name of the talk I give is “and then there was one.” The Healy.

The Healy, which came on line in 2000, was mainly built for Arctic research, but it has made the one trip to Antarctica and it looks like we might be on track for another trip this year.

For more information, check out Icebreakers and the U.S. Coast Guard.

Brittle: Primarily to break the way for the resupply of McMurdo Station. The ice conditions are different down there, they have fast ice (sea ice attached to the land) so you can’t have typical docks or piers. Instead they have an ice pier, a big rebar rectangle moored to the land, so you have to go in and break a channel to it. Once you break the channel in and what we call “groom” the ice pier, you would maintain a channel and mill it, back and forth to keep it from refreezing. Then, we escort in a tanker and freighter can come in with supplies, and escort them back out.

ICESCAPE: When did icebreakers really started as a platform for science?

Brittle: Even back in the day with the Bear there would be some oceanographic work. It’s not a new concept. The Wind class had some capability to carry a science party.

The Polar Sea and Polar Star would list to port side, and its said that it’s because the add on of lab spaces upset the balance. They were built as icebreakers first with capabilities added. 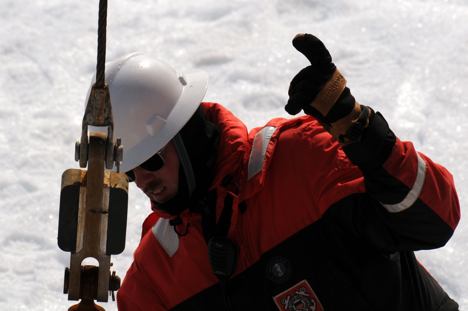 Brittle: We get an interesting mix, including this NASA optics mission with small boat operations, water sampling and other packages.

We’re doing some mapping with the Canadians. I enjoy the moorings, buoy tenders, and deploying equipment. We’re scheduled for phytoplankton work in October-November. I’ve never been up here that late. Early in the season in March and April when we did some duck studies.

In Antarctica one of the things I did was lead the way to a penguin rookery for a team of scientists who wanted to tag them and see what they were eating. They look like cute adorable animals but they get really irritated and flap their flippers when you come close to them, and they’re not the most pleasant smelling.

It’s all just going where not a lot of people get to go. It’s the tough assignments that later on you can tell stories to your kids and grandkids. It’s special to get to do this.